Builders are transforming a hospital into your new campus

That antiseptic hospital smell still lingers in the walls of Aarhus’ former municipal hospital. But not for long: builders are hard at work on AU’s new ‘University City’ campus, and AU’s entrepreneurs will be moving in next year.

The new AU campus taking shape on the site of the former Aarhus Municipal Hospital will be known as the University City. An apt name, because the new campus will be sort of a city within the city: in addition to a number of AU’s research and degree programmes, the area will also accommodate cafés, courtyards and squares, shops, housing and a daycare institution.

Omnibus visited AU’s new campus with Erik Pagaard Nielsen, project director at FEAS, a property development company that’s a subsidiary of the Aarhus University Research Foundation. FEAS bought the old municipal hospital property from Central Denmark Region in 2016 for 807.5 million kroner, and will be leasing the buildings to the university. Nielsen is managing the project of transforming the old hospital into a campus, in close collaboration with the university. 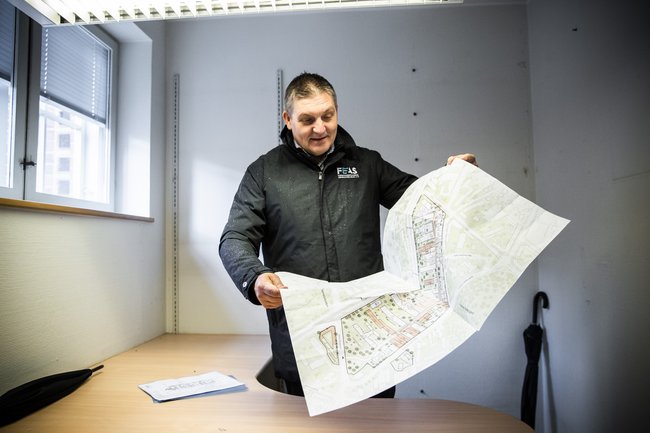 There’s a special atmosphere in this place that was abuzz with doctors, nurses and patients until May this year. But it’s not a ghost town. Because the builders are making a racket. People are still biking and walking through the area, taking a shortcut from Trøjborg to Nørrebrogade. And there’s still activity in the hospital laundry, pharmacy and the southern end of the red brick hospital complex. But the lively bustle of white-coated doctors, patients and their families and ambulances is gone. And most of the buildings are empty. 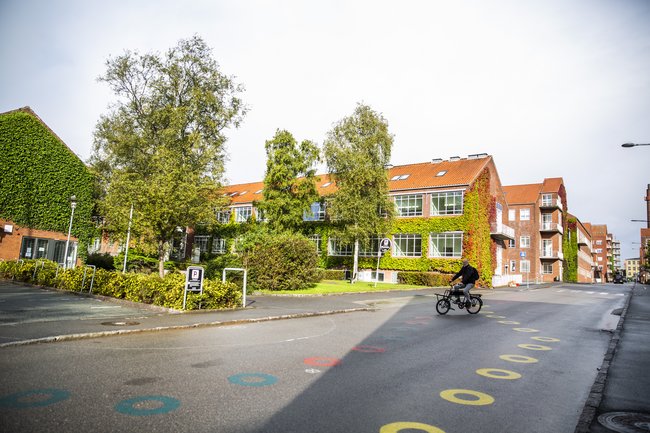 The area will revive

The area is in a state of suspended animation. But it will revive again in just a few years. In fact, the Kitchen, AU’s new entrepreneurship hub for students and researchers will be opening next year – in the old central hospital kitchens. And in three years, when the Department of Molecular Biology and Genetics moves in, about 180 students will also be moving into 127 brand-new student apartments.

A whole room full of keys

The building project Nielsen is overseeing is in a category of its own. This really hit home for the first time on the day he went to pick up the keys to the buildings. His pockets weren’t quite deep enough, he discovered:

“It wasn’t just one key or one bunch of keys. It was a room full of thousands of keys,” Nielsen laughs. 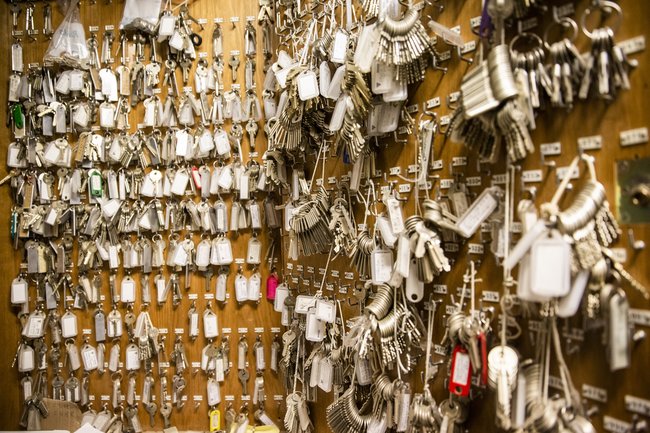 The man who was given the honor of keeping track of all those keys is FEAS service manager Per Egholm. His very first day on the job. On his second day, he was asked to start working on a new key system. Because the thousands of keys notwithstanding, there were still a lot of doors that just couldn’t be locked. 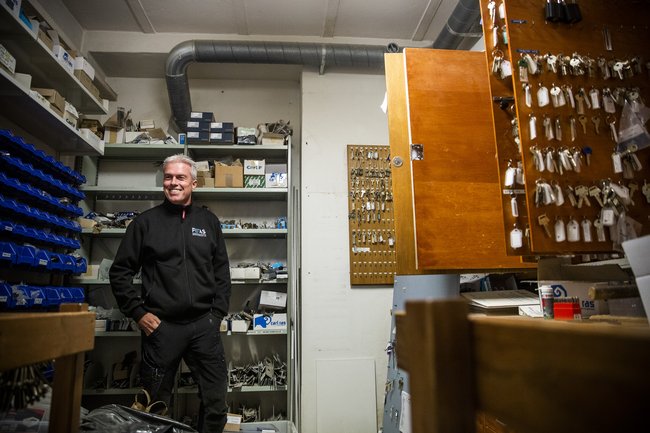 “Well, a hospital is open 24 hours a day, so we had to install locks on a whole bunch of entrances. We’ll be introducing a completely new key system as we renovate,” Nielsen explains.

“And fortunately, I can get in touch with technicians from Aarhus University Hospital if I have doubts about what key I need to use for what.”

Mirror images in red and yellow

When you look at the complex from the south, the hospital looks like a red brick mirror image of AU’s yellow brick campus on the other side of Nørrebrogade.  This is because the same architects, C.F. Møller and Kay Fisker, were behind both projects. But the municipal hospital is less coherent – and less uncompromisingly modernistic – than the main AU campus, because it developed gradually over a period of about a century. The first building was erected in 1893. Around 1830, Kay Fisker and C.F. Møller won a competition to develop a comprehensive plan for the hospital complex, which was completed around 1960.

“Since then, the area has become even more built-up,” Nielsen explains, “but we’re removing some of the newer buildings to get back to something resembling the original plan.” 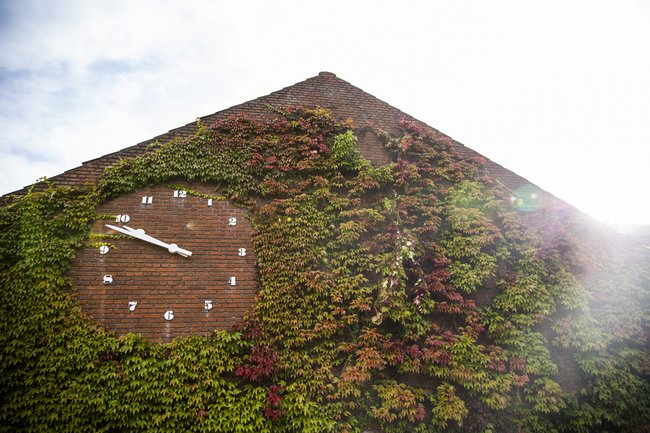 “And there will also be new construction. But it will happen in a way so we stay true to the values. We’re preserving the red brick and the characteristic facades, and we’re emphasising the kinship to the campus on the other side of the street.” 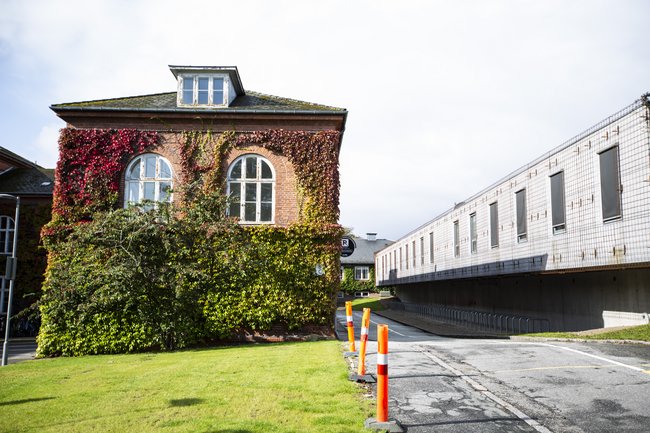 Part of Building 1 (left), which is designated ‘worthy of preservation’. The same cannot be said of the building on the right in the photo, which will be demolished in 2023 when the last Aarhus University Hospital employee leaves from Nørrebrogade.

Several of the buildings in the hospital complex have been designated ‘worthy of preservation’. But in Denmark, this just means that their exterior facades have to be preserved unchanged. One of these buildings is Building 1, the first building, and the boiler house, including its striking chimney. 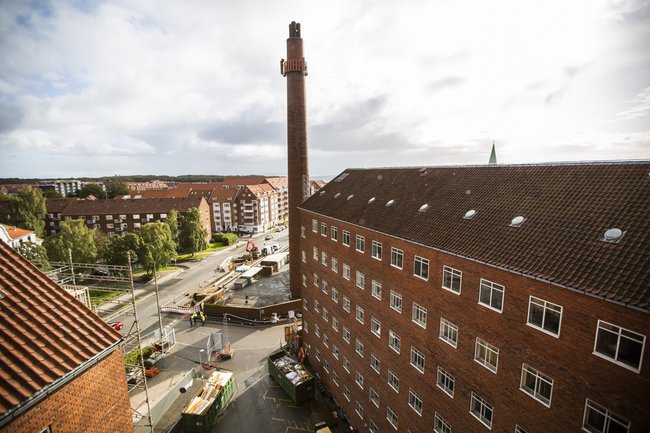 Ripping out the guts

As mentioned earlier, the first department to move onto the new campus will be the Department of Molecular Biology and Genetics. The department will be installed in the buildings that until recently housed the hospital’s neurological department. Right now, the builders are busy scraping all the guts out of the building. Or almost all. The old terrazzo staircase and the elevator doors will escape the wrecking ball. 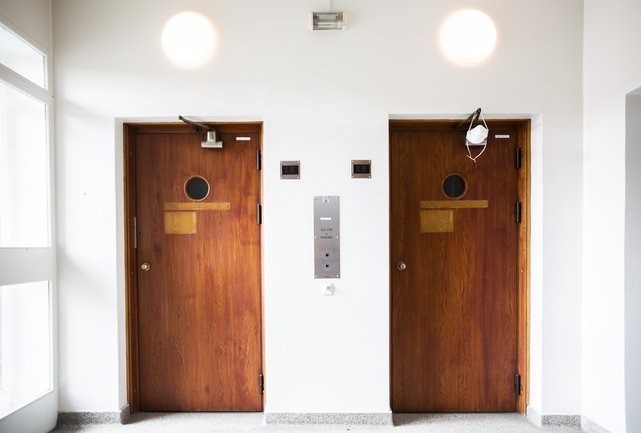 “But we’re ripping out all the installations and replacing them. There are all kind of hospital installations that we don’t need any more,” Nielsen explains. 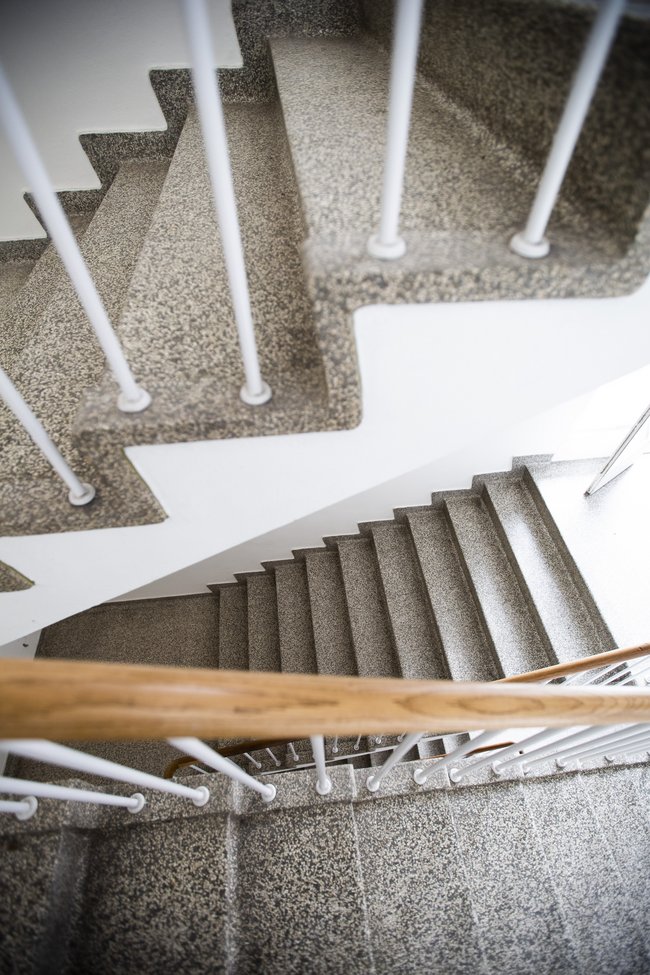 The basic design of the buildings with the long hospital corridors will be preserved as well, as the corridor walls are structural.

“And we also have to reinforce the building, because it wasn’t designed to support the eight storeys it ended up having. So now we’re putting in a steel reinforcing structure so it will be able to support what it’s basically always been able to support.” 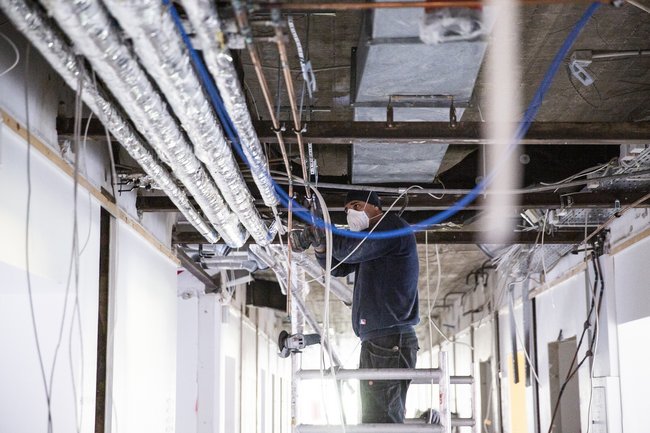 In the old patient’s wing and operation wing, the researchers will have offices and labs. Students will have the lower storeys and the basement. And there’s no symbolism in that, Nielsen assures me.

“Those are the rooms that are best suited to the purpose. There’s already an auditorium and good opportunities for building teaching labs and creating a student environment around the auditorium and the cafeteria. And I actually think the rooms feel airy and light, even though they’re below ground level, because there are lots of light wells that provide a good inflow of light.”

Student housing for about 180 students 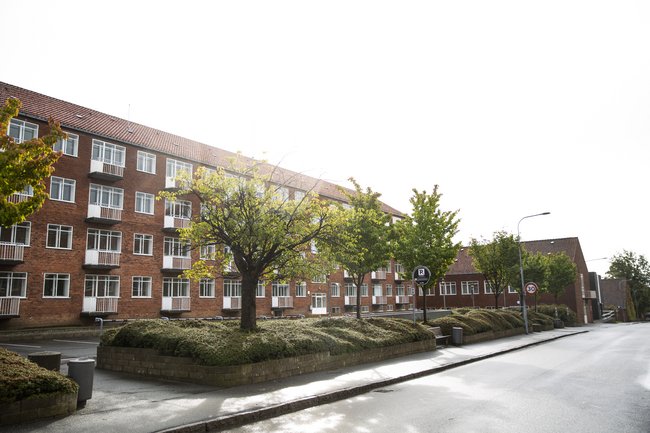 The old patient hotel lies at the heart of the new campus. With its little balconies, it looks a lot like the dormitories in the University Park. And in fact, the building served as a nursing students’ dormitory before it became a patient hotel. And soon it will be welcoming students again.

“It will be renovated in 2020-21, and it’ll be student apartments, because we’re very conscious about creating a different kind of housing than what we have with the dorms in the University Park,” Nielsen says.

A decision hasn’t been reached yet on how many housing units will be available in the University City.

Housing for researchers and students

“But it’ll be around 300-400 units. Not just student housing – we’ll also build guest housing for international researchers and teachers. In fact, we expect to be offering the first guest apartments next year.”

Some of them will be located in two older houses on Peter Sabroes Gade at the southern end of the property. One of them is the childhood home of film director Nils Malmros, whose father was a consultant physician at the municipal hospital.

From busy thoroughfare to pedestrian street 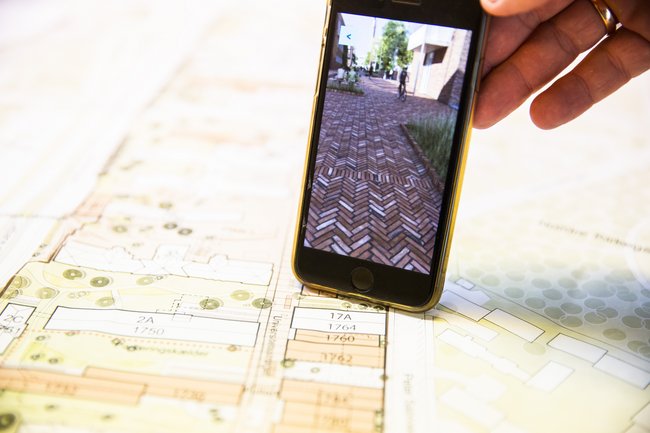 In connection with its 75th anniversary, FEAS had some visualizations of the new pedestrian street made, in collaboration with the Alexandra Institute and AART Architects. You can see more visualizations at the end of the article.

Hospital Street (Hospitalsgaden) runs through the area like an artery. That will change now. The street will be transformed from an asphalted road into a pedestrian street primarily for pedestrians and cyclists. Only service vehicles will still be allowed to drive on the street.

“The plan is to pave the pedestrian street and the squares between the buildings with red bricks in a herringbone pattern,” Nielsen says.

However, he emphasises that the plan may need to be adjusted along the way.

An urban environment, but not a concrete jungle 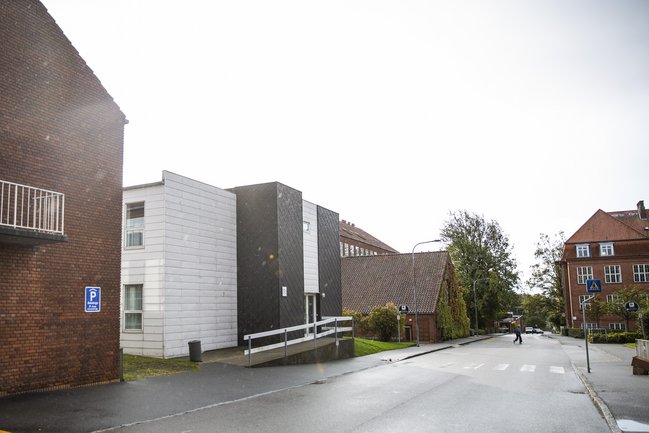 Some buildings will be torn down to create more space between the remaining structures. For example, the grey building in the photo. This will also make room for recreational areas. The University City won’t have large park-like grounds like the University Park. But that doesn’t mean that the new campus will be a concrete jungle, Nielsen assures me.

“We’ll integrate the green from the park into the University City. Right now there’s a wall along Nørrebrogade that forms a barrier. We’re going to pull it down to open the area up. But we’ll be creating an urban environment here, because the development is denser than in the original campus on the other side of Nørrebrogade.”

Connecting the old and the new

Today there’s only one passage, and it’s not particularly inviting. We want to create passages that are as bright and friendly as possible,” Nielsen says.

The two additional tunnel bores under Nørrebrogade were dug in connection with the construction of the light rail.

The Kitchen – See you in the fridge 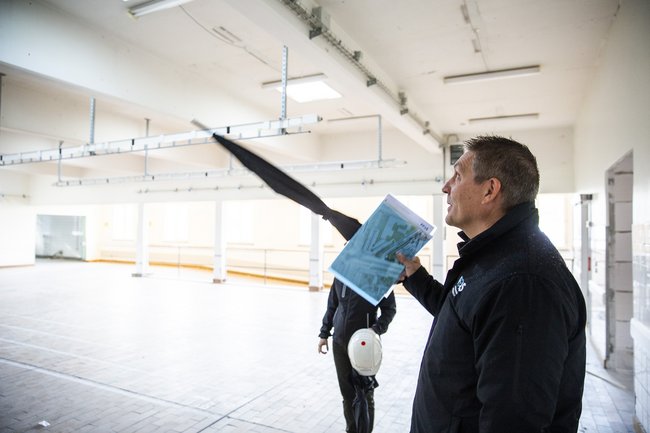 Even though the first department won’t be moving in until early 2022, champagne corks will start popping next year, when AU’s new entrepreneurship hub for students and researchers will be inaugurated. The new hub will be called the Kitchen because it will be temporarily housed in the old central hospital kitchen, which was still in use up until three or four months ago. There’s still a faint whiff of cooking.

“We’ll shine it up and do something about the acoustics. But the plan is to preserve the industrial look, for example by leaving the tiles on the walls,” Nielsen explains. 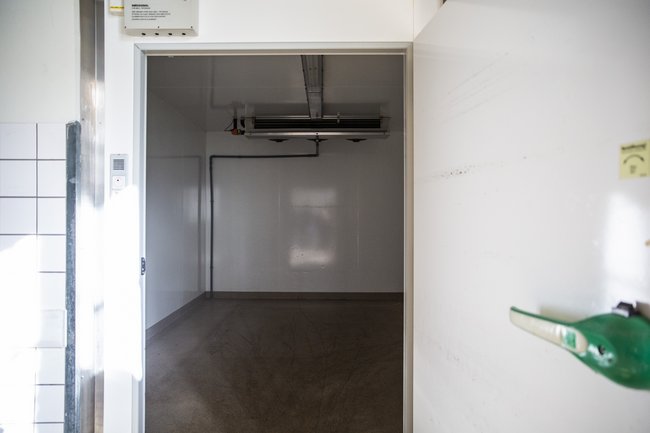 The walk-in fridge is set to become a meeting room.

There are plans to create a meeting room in one of the kitchen’s walk-in fridges – I hope they can get the sour fridge smell out first.

“In the old carpenter’s shop where the hospital’s technicians worked until the beginning of September, we’ll create a ‘maker space’ – a real mad scientist workshop with equipment like 3D printers, so the facilities will also support more scientific forms of entrepreneurship,” Nielsen explains.

When asked how sustainability is being integrated into the development of the new campus, Nielsen tells me that FEAS and AU are considering having the University City area DGNB certified. DGNB is a Danish certification programme that evaluated the sustainability of a construction project or development on the basis of a variety of quality criteria, including financial, environmental, socio-cultural, technical and process-related.

“In addition, we’re going to reuse a lot of the buildings instead of just demolishing them, disposing of the materials and building something new. We’re saving a lot of resources that way.”

He also makes it clear that he believes that while tearing everything down and starting over would be simpler, it would be a huge mistake.

“This area has a lot of value for the city. Everyone here has a relationship to the municipal hospital.” 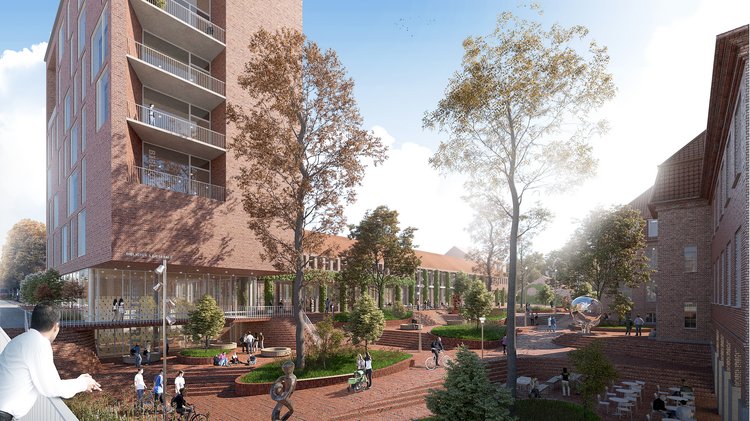 The big square at the heart of the new campus. Visualization: AART Architects 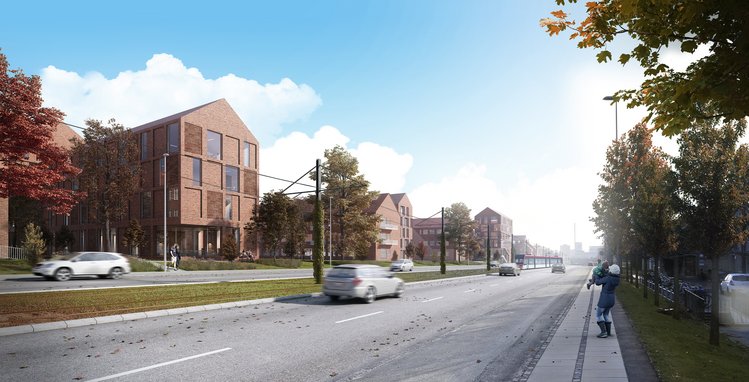 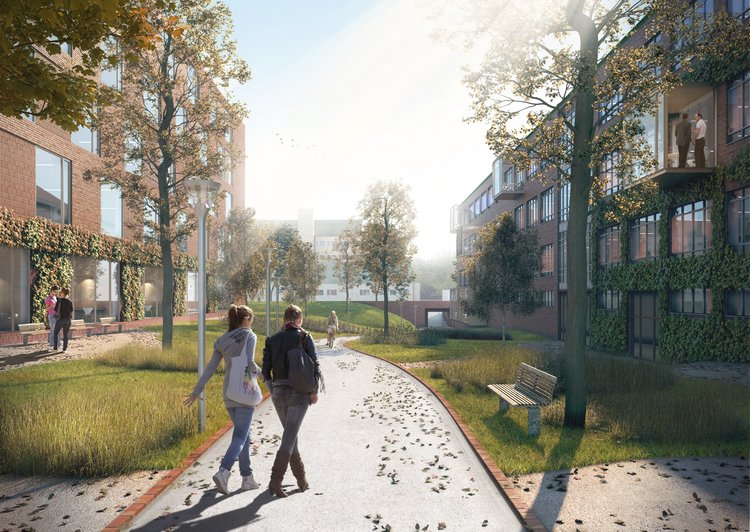 Visualisation of the middle tunnel under Nørrebrogade. The yellow brick campus is just visible on the other side of the road. Visualization: AART Architects 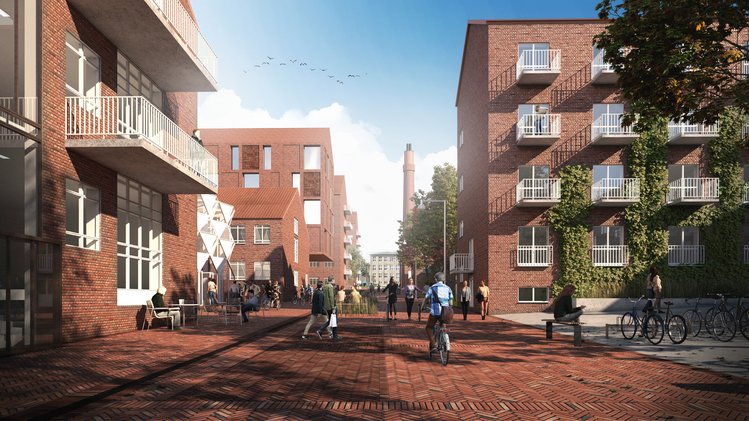 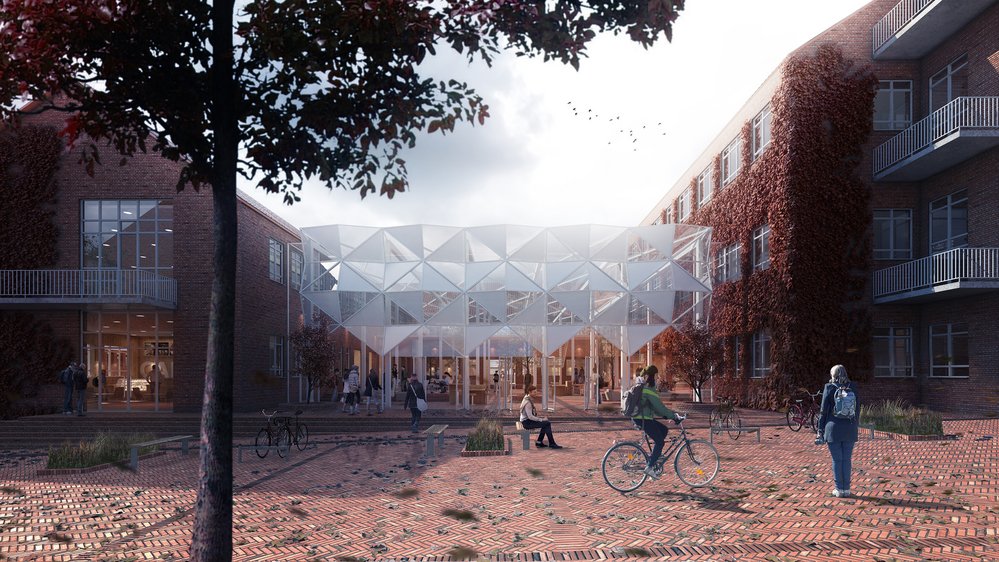