Report from a mop bucket: We don’t buy your arguments, management!

‘Come down to the lunchroom at 11. Dorte has something she wants to say.’

The text message lit up the smartphones of 30 cleaning assistants at Aarhus BSS at 10:45 am on Thursday 17 January. But when the cleaning assistant who were at work that day turned up in the lunchroom in building 1411, cleaning manager Anne Dorte Venøbo wasn’t the main speaker.

Instead, it was Peter Bachmann Vestergaard, head of building services at Aarhus BSS, who explained that the senior management team is planning to put cleaning in 51 buildings at AU out to for tender. Which will hit the 30 cleaning assistants at Aarhus BSS particularly hard. As well as four at Arts and about three at ST.

The text message had come from their supervisor, Vibeke Vedelø. She explains how Vestergaard presented the urgent staff meeting that Thursday:

“Peter Bachmann Vestergaard said that we had been chosen in connection with the competitive tendering of the cleaning services area.”

This makes the 13 ‘chosen ones’ who are taking a break in the lunchroom laugh. I’ve popped by the lunchroom to find out how the cleaning assistants feel about the prospect of their jobs being outsourced.

And even though there’s a positive atmosphere among the women, the tone is also sarcastic. They all agree that the management’s arguments in favor of outsourcing their work are rubbish.

A lot of talk about reducing costs

After that initial briefing, the arguments in favor of outsourcing were presented to the cleaning assistants at a staff meeting last Monday. The management was represented by the deputy director in charge of AU Finance and Estates Projects and Development, in addition to the administrative centre manager, the head of building services and the head of HR at Aarhus BSS.

“We were told that the management hadn’t made a final decision yet, and then they talked a lot about reduced costs other places,” remembers Vibeke Vedelø.

“The said that they had examples of cost reductions after outsourcing in Roskilde, Odense and Aalborg,” adds Diana Farauanu.

“And that they had surveys that showed that they could save up to twenty percent the first time they put cleaning out to tender. And that they would also be able to save after subsequent competitive tenders, even though it would be somewhat less,” Birgit Nielsen continues.

What did you think about those arguments?

The clean assistants seem to agree that her response pretty much sums it up.

But Jytte Højbo Rasmussen elaborates on their reasons for their scepticism about the management’s anticipated cost reductions anyway.

“An acquaintance of mine told me about a folk high school on Søren Frichs Vej that’s had three different cleaning companies in four years. That is is because it’s not long before the quality of the cleaning starts to slide, because the company can’t do it as cheaply as they expected. And then a new company comes that also sells itself too cheap, and it just continues,” she says. 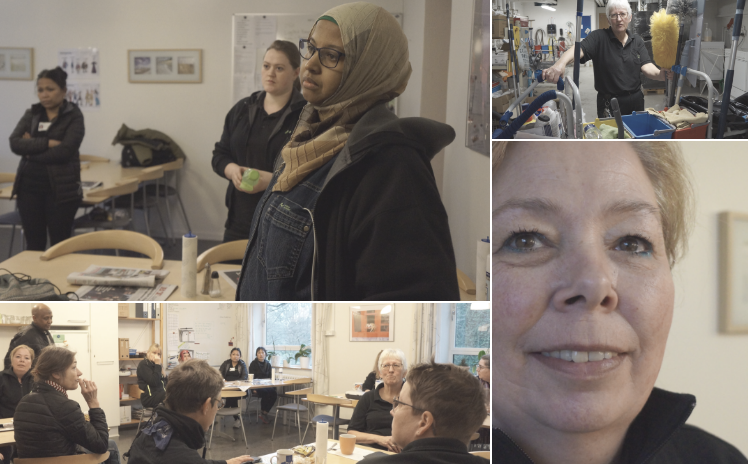 Birgit Nielsen as well knows from experience that cleaning assistants can’t count on princely treatment after a transfer to a private company. For several years, she also cleaned at the bank Sparekassen Kronjylland in addition to her cleaning job at AU.

“Cleaning got taken over by a new company two years ago, and for a while I still had two and a half hours to do my work. But when my collective agreement expired, I was told that from then on I would only have an hour an a half, and that I would have to do more work, even though I would have less time. After awhile it got to be too much for me, so I quit on January 1st this year,” she explains.

Jytte and Birgit are far from the only cleaners in the lunchroom who have stories to tell about how working conditions decline after jobs are outsourced to a new employer. One of the reasons behind this is that a new employer is only legally obligated to comply with the employment contract from the former employer until the collective agreement expires.

The standard is ok!

Vibeke Vedelø explains that with these experiences in mind, she did ask management at the staff meeting whether the possible cost reductions were the only parameter they were looking at. Or whether they could also say anything about the standard of cleaning in Roskilde, Odense and Aalborg after outsourcing.

“I was just told that the standard was ‘ok’. Ok?! What does that mean?”

Vibeke also asked how much a cleaning assistant costs, ‘with everything included’, as she puts it. And explains that management’s answer was that cleaning at AU currently costs between 130 and 170 kroner per square meter annually.

“If that’s as close as they can get to what it costs to have us do the cleaning, then how can they know how much they’ll have by outsourcing?” Jytte Højbo Rasmussen asks.

So why haven't we heard about this before?

Another one of management’s arguments in favor of outsourcing has to do with the law: the university has a legal obligation to evaluate whether there are technical – as well as administrative – tasks that can be performed by a private company.

But the cleaning assistants aren’t buying this argument either.

“They explained that they have to look at it every fourth or fifth year. But if this is the case, then why haven’t we ever heard about it before?” Vibeke Vedelø wonders. This makes the cleaning assistants who have been at AU part-time or full-time for 10, 15 and 20 years all shake their heads.

A chance to bid on your own job

The cleaning assistants have been told that they will have an opportunity to bid on their own work if management decides to put cleaning out to tender. And if they decide to do so, they will have help from a consultant.

This idea has an effect on the atmosphere in the lunchroom that’s not easy for an outsider to interpret. But the encouraging collective nods to a co-worker who is answering one of my questions, the remarks exchanged in small groups at the tables and the quick smiles that light up despite the seriousness of the topic – all of that suddenly disappears.

And when I ask the cleaning assistants whether they were going to take advantage of that opportunity, for the first time, a brief silence settles on the room.

Maybe you need time to talk it over during your breaks for the next little while first...

Then the cleaning assistants start going back to their work, and there are only a few of them left in the lunchroom. The remaining cleaning assistants are more forthcoming about their reservations about bidding on their own jobs. And it’s a question of how much their their initiative, flexibility and cooperation skills will weigh in the balance when management decides who is going to keep the 51 buildings clean.

“But that’s what we’re good at – getting everything to hang together when all is said and done,” Birgit Nielsen explains.

“Who will they get to do the job when the Main Hall has to be cleaned all the sudden? Or if they need a hand in one of the cafeteria kitchens?” she asks.

This is something she feels strongly about:

“If we see a clogged up toilet,we fix it if we can. And if we can’t, we drop the caretakers a note. And the same goes for when we notice a burnt-out light bulb. And what about all the different coffee machines everywhere that have to be cleaned in just as many different ways? If management expects that kind of flexibility from an external [cleaner], they’ll soon learn better, because no external will deal with a clogged toilet, because that’s not their job.”

Maybe Deqa Ali has a button you can press, just like one of those coffee machines. In any case, she reacts immediately, her eyes bright with what might be the beginning of tears of anger:

“Yes, the professors are getting more and more spoiled! They all have to have these big coffee machines. And that’s fine. But what about us?! What we’re talking about right how is our livelihood. I think there’s a lot of inequality here.”