Cut down on your food budget by diving into containers

Is dumpster-diving a great way to stretch your food budget – or is it just really gross? Maris Pedaja, an international student at AU originally from Estonia, set out to investigate.

How to start? The most important tips from Steffen:

Dumpster diving – not for you?

Don’t worry, you can contribute to the anti-food waste movement while shopping as well: try to select food which is not fulfilling the high aesthetic demands of consumers, such as ripe bananas, weird-shaped cucumbers and crushed cookies. These products are very likely to end up in a dumpster by the end of the day.

Just before I moved to Aarhus this summer, a good Lithuanian friend warned me: “There are two things I dislike about Denmark. The weather and the prices.” While I feel like he exaggerated the weather part, I can’t agree more on the point he made about enormously high prices. As a Nordic citizen and a true potato lover, I found potato prices the most shocking: DKK 12.79 per kg instead of DKK 3.20! Daylight robbery!

However, there are ways to cut down your expenses. You can eat plain rice for weeks, hunt discounts or join events that offer free food – whatever floats your boat! An additional possibility is to dive into supermarket containers in search of free food. It might seem like an odd, not to say gross way to stretch your budget, but why not give it a chance and dive in?

I joined three experienced dumpster divers on a Friday night in late November. One of them, Steffen Sand, a project administrator by day and a hardcore dumpster diver by night, has been dumpster diving for about 5 or 6 years, labelling himself as an everyday anarchist. He considers dumpster diving more than a hobby or a way to save money.

“It’s a way of living and my personal protest against the system. Nowadays, people are acting on autopilot, blindly following the rules coming from the authorities,” he states.

We met at 21:00, jumped in a car filled with empty boxes and set out to visit eight supermarkets around the perimeter of Aarhus. “All stores outside the city centre are good spots for hunting. Moreover, there are several good spots in the city as well,” Steffen explains.

As we reach the containers and stop the engine, Steffen points to the house nearby. “Try to be silent here,” he warns us. “In that house lives a man who doesn’t approve of what we’re doing. He might come and start yelling.” While turning on his headlamp, he adds with a smirk: “But when he does that, just let him yell.” He steps out of the car and opens the container: “Well, dig in,” he encourages us.

If the dumpsters are unlocked and can be easily accessed without trespassing, it is not illegal to dive into them. But not all people and supermarkets approve of dumpster divers, which is why many dumpster divers prefer to visit them outside opening hours.

Although I’m mentally prepared for the huge amount of food in the containers, I can’t help myself gasping as I witness the container filled with bread, vegetables and fruit.

For a while, there’s only silence, interrupted by occasional short phrases, such as “Lemons!” and “Do we want these avocados?” After having filled two boxes with food, closed the containers properly and made sure that we’ve left no mess behind, we move on to our second destination.

According to the Danish Veterinary and Food Administration, dumpster diving is defined as private persons collecting food from waste containers.

Food found in supermarket containers is considered as waste and may not be given to others as food.

Eating food found in containers can be risky:

The procedure is more or less the same: we park behind the store and march towards the big containers. Steffen lights a cigarette. He doesn’t think that dumpster diving is wrong and he is strongly against food waste. In his everyday life, he witnesses lots of people unable to feed themselves. Steffen helps them as much as he can by sharing the food he finds. If I ask him about the legal aspect behind this act, he smiles: “If supermarkets throw food away, it becomes trash for them – so technically I’m not sharing food anymore, I’m sharing trash! And the law says nothing about that.”

However, not all dumpster divers are dumpster diving for financial reasons. Steffen has met a huge variety of people with different motivations and backgrounds. When I ask him how the variety of food has changed over the last years, he replies that there’s less food to find now. He’s unsure whether it’s due to better food policies by the supermarkets (reducing prices of items that are close to their expiration date) or people’s increased need for food – probably a combination of both.

Do you even need to buy groceries?

“Yes, due to my laziness. It’s much easier to go to the supermarket and buy whatever I want instead of hoping that I’ll find it in the container. But I spend much less money on food now than before.” 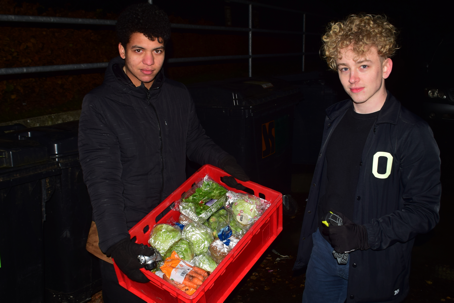 The youngsters presenting a box of perfectly edible food which was saved from the Aldi container. Photo: Maris Pedaja

Our third destination turns out to be a cookie paradise. The container is filled with numerous cookie packages. Steffen inspects the expiration date of the cookies – May 2018 – and opens the Food Ministry webpage. He wants to check whether there’s something wrong with the cookies which can explain why they have been withdrawn from the supermarket shelves.

“If there had been a certain reason for throwing them away, this should have been posted on the webpage,” he says.

Steffen finds no information regarding the cookies and nods towards us: “Well, feel free to grab them all!”

While we are busy taking the cookies, he shares a bittersweet story about how he once discovered a container filled with peanut butter. When he checked the webpage for the reason, he found out that there was a mistake on the labels: the allergen “peanut” was not written in capital letters… 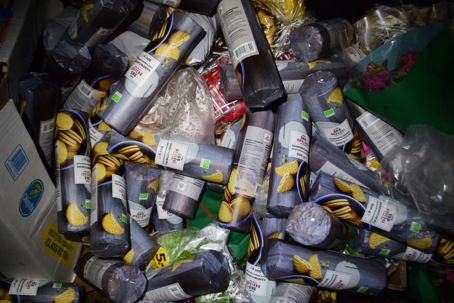 “Steffen, have a look,” is a phrase that’s repeated throughout the whole evening – when it comes to the decision whether to take it or leave it, Steffen’s opinion is respected.

Steffen himself claims that it’s not so hard to inspect whether a product is still okay to eat or not.

“If you follow common sense, e.g. don’t pick a broccoli which has been soaking a while on the bottom of the container without a plastic cover, you shouldn’t face any health troubles.”

Have you ever felt sick after eating something you’ve found?

“Never after eating something I’ve carefully inspected and claimed to be perfectly edible. However, I’ve consciously been testing the expiry dates of certain products, just to see how long after the expiry date it’s still okay to eat something. I’ve never had serious issues with that but sometimes my stomach has signalled to me that this might have gone a bit too far.”

When I ask him whether it’s safe to take meat, he nods. He explains me three steps for making sure whether meat is in good condition or not. First, it’s important to check whether the package is still unbroken – if it’s broken and the air has gotten inside, then it’s a bad sign. Second, it’s possible to estimate the quality of meat by the amount of liquid inside the package – if there’s a lot, you shouldn’t take it. Thirdly, if the meat has fulfilled the first and second requirement, it’s important to trust your nose: sniffing time! 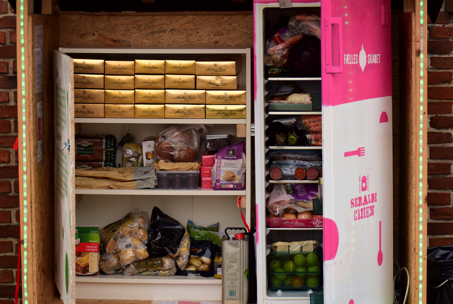 A brand new concept in Aarhus, Free Fridge. Everybody is welcome there to bring and/or take food. It’s an ideal opportunity for dumpster divers who have found a lot of food they’re unable to eat. Photo: Maris Pedaja

The dumpster divers cheer as they find eight big chunks of frozen meat. According to Steffen, these are safe to take. As we are sitting in a warm car again, Steffen turns to me with a satisfied smile on his face. “This just made my whole evening,” he says and points to a small package he’s holding. Meatballs.

“Depends on my mood: if I’m craving for proper red beef and see it in a container then it’s the coolest thing ever; if I’m in the mood for chocolate and find that then of course that’s what makes my day. On second thoughts, the coolest thing is actually when I don’t even know what I want before finding it.

Oh, and once I got a proper vacuum cleaner.”

Out of all the containers we’ve been visiting so far, this is for sure is the most random (and disappointing) one. Our findings include some meat, which gets approved by Steffen, some butter, some pâté, Phillips light bulbs and a witch-shaped children’s toy. We decide to leave the toy. 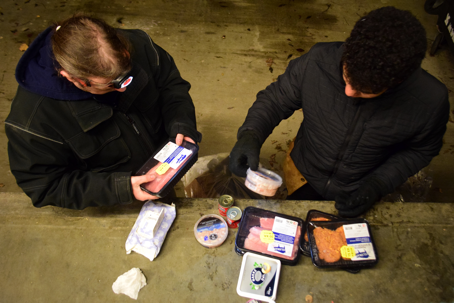 The catch itself is successful. We find some more bread, vegetables and fruit. In addition to lots of dairy products, mainly yoghurt with the same night’s expiration date. The consistency seems a bit odd, though – so we don’t dare take it.

We passed this Netto about two hours ago – when we drove by, we witnessed a worker coming out from the back door, carrying a big plastic bag towards the containers. The whole area is completely empty now. We open the container and find out what was in the bag the worker had been carrying. Doughnuts! Loads of them. A mini-midnight-doughnut-party next to the containers is exactly what we need right now to celebrate the success of our dumpster diving tour. We don’t take much more this time – our boxes are full, we are satisfied and tired. It’s time to bring the food to the Ungdomskulturhuset and go home.

The food we collected was mainly used for two big events: the opening of Fællesskabet (free fridge in Aarhus, ed.) and a futuristic feast organised by Ungdomskulturhuset. The rest was shared among people in need.

Into sustainability and minimal food waste? – here's where to find like-minded people

1. People’s Kitchen at Trøjborg Beboerhus is a good opportunity to get to know lots of like-minded people, both Danes and internationals. Taking place every Sunday from 16:00 to around 22:00, the concept of people’s kitchen is simple: every Sunday, people come together to cook food from Farmer’s market vegetables which were otherwise meant to be thrown away. You never know what’s on the menu and the cooking process is an improvisation. One thing is sure, though: it’s delicious!

2. Skraldecaféen is another good networking opportunity. In addition to organising cool events and feasts (which involve cooking and eating together), they also hold weekly meetings on Tuesdays on all kinds of topics that concern Skraldecaféen, from Christmas dinners to arrangements and building projects. The meetings are held in Danish but since everybody’s very nice there, the language barrier is not a problem. (You’ll get a personal translator – tested and confirmed!).

3. Free Fridge Aarhus is a new concept in Aarhus. Located not far from the bus station, everybody is welcome there to bring and/or take food. It’s an ideal opportunity for dumpster divers who have found a lot of food they’re unable to eat as well as for “normal” people who simply have something to share (before going on a vacation, for example).