Guide: Conquer the rain – don’t be afraid to look stupid

If you are going to survive the 200 rainy days in Denmark, you need the right gear. International students on their first encounter with the weird Danish weather – and expert tips on how to stay warm and dry (but not classy – you can’t have it all).

On a bright and sunny day in early September Rocio Valderrábano, 28, set off biking to the first class of her journalism MA at Aarhus University.

Valderrábano had heard that Denmark’s rain could be intense, but she had also survived the rainy seasons in her hometown of Mexico City where the downpour can cause gnarly traffic jams.

A light drizzle began to fall, but it wasn’t anything that she thought would deter her from getting to class. Then the rain came down harder. And harder.

Soon Valderrábano had to take refuge under a bridge to wring out her soaking wet clothes and email her programme coordinator to say she’d be late for class because she needed to go home and change into dry clothes. Immediately after class, she purchased a new rain jacket, rain boots and rain pants.

“I didn’t expect the spontaneous rain,” she said, referring to the weather’s quick shift from sunny to downpour. 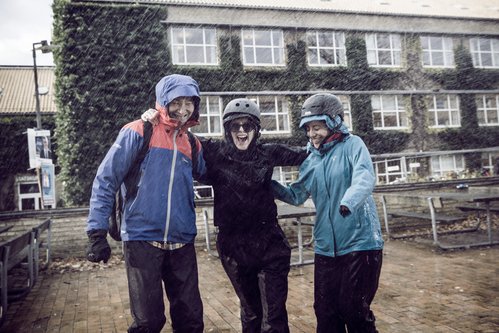 Believe it or not. It wasn't raining when we shot this picture. We had to fake the rain by using a water hose kindly provided by AU's gardeners. Photo: Lise Balsby

Her advice for other students about to start their studies in Aarhus? “Don’t underestimate the rain here in Denmark.”

If you’re a student in Aarhus, chances are you would agree. On average over the last decade, Denmark sees 179 rainy days and 765 total millimetres of rainfall per year. And the country has recently been particularly wet: Since 2011, the summers in Denmark have been more rainy than dry, the Danish Meteorological Institute recently reported. While there are wetter climates to be found around the world, Denmark’s biking culture means that students are more likely to come face-to-face with the elements on a daily basis.

As an international student myself (whose been embarrassingly drenched in downpours several times since arriving here), I wanted to know more. Why is Denmark so rainy, and how do I navigate the process of buying quality rain gear without breaking my budget in already pricey Denmark? So I set out to investigate.

Why is Denmark’s weather so weird?

Denmark’s unique location between the North Sea and Europe is what fuels its weather patterns, according to John Cappelen, senior climatologist at the Danish Meteorological Institute.

“Our weather is a combination of where the wind is blowing from, the season, and the proximity to the large continent,” he said.

Westerly winds from the sea are the most frequent, and bring precipitation and windy weather no matter the season. Easterly winds, especially common during late winter or spring, bring cold weather during winter and warm weather during summer, with sunny weather as a component. Southerly winds, also with a continental origin, cause cold during winter and heat during summer and are often accompanied by haze or fog. In summer they can bring moisture, heavy showers and thunder. Winds from the north are generally cold, dry and the least frequent wind direction in Denmark. The coldest wind direction in Denmark is northeast, and if very cold air from Sweden moves out over, say, the Kattegat, exceptionally heavy showers may form which can lead to prolonged local snowfall.

“Aarhus in particular is actually a bit drier than the interior of Jutland,” Cappelen said.

But just because the sun is out in Aarhus, doesn’t mean it won’t be raining in Copenhagen. “Denmark is a small country, but going into details it is not a small country,” said Cappelan. “There are a lot of different climates [in different] regions.”

What to look for when shopping rain gear


Sanni Jensen, 24-year-old native Dane and also a student studying her journalism MA, has an array of gear to prepare her for rainy days: She dons rain pants, rain boots, sunglasses and a rain jacket with the hood tucked under her bike helmet. It’s quite the look, she says, but she stays warm and dry when biking around Aarhus.

That isn’t to say there aren’t plenty of brands and styles that can help you adjust to being covered head-to-toe in waterproof material.

For classic Danish style, the Aarhus-based Rains brand is known for its fashionable, minimal colour block coats, pants and backpacks—as well as its above-average prices. Jensen also recommends sporting goods stores such as Spejdersport, Sport24, and Intersport, and brands such as Hummel, Whistler, Helly Hansen, Haglöfs, and Peak Performance. For those truly on a budget, she suggested Bilka, Føtex, T. Hansen and XL Byg, as well as scouring online discount sites.

While it is possible to purchase second-hand, Jensen said that water resistance on clothing will decrease over time. A worn-down rain jacket will leave you just as wet as if you didn’t have one at all.

As you shop, there are a few technical specs to consider. Jensen recommends going with at least a 5,000 mm rating of water resistance. It is also important to balance waterproof material with breathability of fabric: PVC coating is very water-resistant but not as breathable, Jensen explained. She recommends a breathability rating of 5,000 to 8,000 grams.

He Zhang, 33, also studying a journalism MA, frequently biked from his suburb into the city for work when living just outside Beijing, China. But his route was relatively flat and he had an electric-assisted bike, so he rarely broke a sweat. That’s not the case in Aarhus.

“Biking makes you really hot,” he said. “That’s always a problem.” His solution: Get a big bag and pack layers.

Zhang now has four rain jackets, including a light water-resistant jacket bought in China, a heavy waterproof coat from UK brand Berghaus for winter, and two Rains brand jackets for layering (and style). He also invested in a waterproof backpack from Rains, given he’s a photographer and wants to protect his gear when he is out shooting. 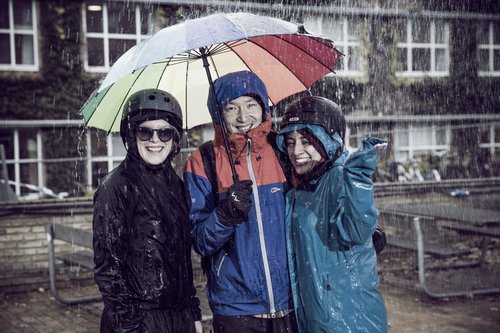 The umbrella is nice on pictures, but less useful in windy Aarhus, says He Zhang. Photo: Lise Balsby

The one piece of rain gear he recommends against? “Forget the umbrella, because it is so windy here,” he says.

While it can be tempting to stay out of the rain altogether, Zhang said that biking, walking and getting outside is the best way to explore the city.

“You need to get yourself prepared for the rain and enjoy the rain,” he said. “Otherwise, you’re not going to survive the 200 plus days of rainfall per year.” 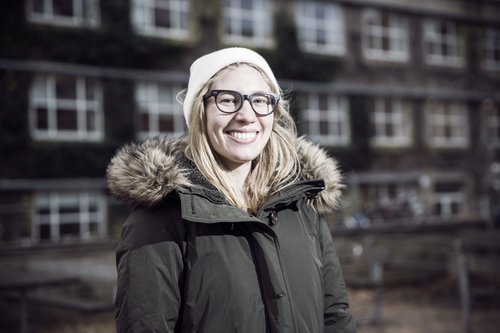 Karis Hustad is studying Journalism at Aarhus University. She is from the USA and knew it is raining a lot in Denmark. But she didn't expect it to rain this much. She met fellow international students who was also caught by surprise by the rain in Denmark. This sparked her curiosity to find out more about the weird Danish weather - and how to dress appropriately without breaking the bank. Photo: Lise Balsby