Over one-third of the experienced thesis supervisors at Aarhus BSS agree in a new survey.

Less time for in-depth study and reflection, more superficial analyses and less scope for learning. These are some of the criticisms expressed by thesis supervisors at Aarhus BSS in a survey performed by the Centre for Teaching and Learning commissioned by the Aarhus BSS Academic Council. 27% of the experienced supervisors who participated in the survey agreed that the quality of Master’s theses has declined since the introduction of the study progress reform.

As a result of the reform, students now have four and a half months to write their theses instead of six. And that has consequences.

Fifty-six percent of the supervisors advise students against choosing ‘risky’ Master’s theses projects more often than previously, while 32 percent encourage students to work with theories and methods they are already familiar with more often. 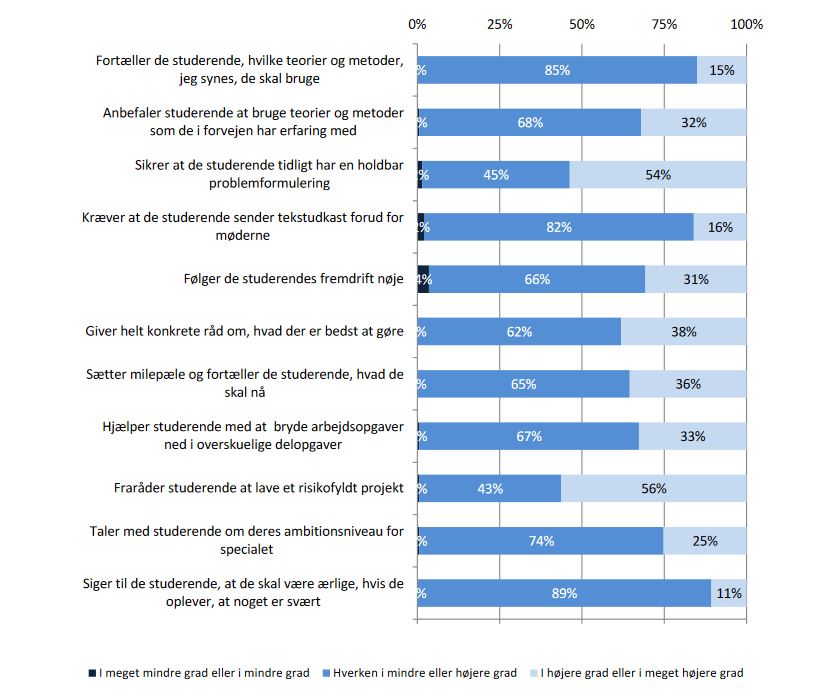 Translation: Supervisors’ strategies for supervision, post-study progress reform: Tell the students which theories and methods I think they should use. Recommend to students that they use theories and methods they have previous experience with. Make sure that the students have a viable research question early on. Require that students submit draft text prior to meetings. Follow the students’ progress closely. Give very concrete advice on the best thing to do. Set milestones and tell the students what they need to accomplish. Help students break their tasks into easily manageable subtasks. Advise the students against doing risky projects. Talk with students about their level of ambition for the Master’s thesis. Tell students to be honest if they are having difficulty with something. Much less or somewhat less. Neither more nor less. More or much more. Source: Quality in Master’s theses, quality survey 2018 (in Danish)

On five of Aarhus BSs’ ten degree Master’s degree programmes, the requirement for the length of the thesis has been reduced, and about one in four supervisors finds that fewer theses are based on independent empirical observation, while one in five finds that fewer students write their theses in collaboration with external partners such as private companies and public institutions.

This is not a crisis

While Per Andersen, vice-dean for education at Aarhus BSS, takes the researchers’ perception of a decline in quality seriously, he also notes that there has been no marked fall in the grades awarded to Master’s theses since the reform.

“It’s still the same learning objectives and the same supervision, and the result is still about the same grades as before. Objectively speaking, there’s nothing that indicates that the theses are weaker. On the other hand, when over a third of the supervisors share this perception, we have to look at how we can address the situation so that they don’t continue to have that perception,” says Andersen.

However, he stresses that he doesn’t see the situation as a crisis.

“Most of the students finish within the prescribed time to degree and with a good result. Generally speaking, we have gotten through the first phase of implementing the reform successfully.”

The survey also shows that students complete their degrees more quickly, and that the supervisors perceive students as better at managing the thesis process, which is also more clearly defined and framed, according to the supervisors.

Search for solutions after the summer holiday

Andersen does not have any concrete solutions in the works, but will discuss the issue with the directors of studies and the staff of the individual degree programs after the summer holiday.

“There’s a lot of variation in what kind of theses we have for the different degree programs. It can’t be a one-size-fits-all solutions, but rather measures which are tailored to the individual degree programs. I would rather spend time finding good solutions than on finding quick solutions.”

Precisely for this reason, students who are set to write their Master’s theses in the course of the next year shouldn’t count on any major changes in the process.

Not enough time to assess theses

The decline in the quality of Master’s thesis is not the only problem identified by the supervisors at Aarhus BSS. Over half of them find that there the conditions for thesis supervision have changed for the worse, among other reasons because there is too little time to assess them. Andersen intends to address this issue as well after the summer holiday.