Documented for the first time: Large numbers of clerical employees have been replaced by university graduates in AU’s administration But research hires have outpaced administrative hires over the past twenty years.

A new PhD project has analyzed employment trends at Danish universities over the past two decades for the first time. While the proportion of tenured academics has shrunk, the PhD and postdoc population has ballooned. And in the administration, clerical workers and manual and technical employees have been replaced by university graduates. Generally speaking, the academic staff group has grown more than the administration.

Andreas Kjær Stage, a PhD student at AU, has mapped the composition of the workforce at Denmark’s universities, with a particular focus on how it has changed over the past twenty years. His findings are unequivocal, he believes:

If we lined up all of the university employees back them, more than one in three would have been a classic clerical worker – for example a secretary – or blue-collar worker. Today, these groups comprise less than one-fifth of the university workforce.

And the explanation is clear. Employees with university degrees now occupy three times as many office chairs in the administration than back then. Whereas every twentieth AU employee belonged to this group twenty years ago, now more than one in seven paychecks goes to a so-called ‘AC-TAP’.

According to Stage, the researcher behind the study, this is a extremely marked shift. And it reflects how the university’s role has changed over the past two decades.

New demands on the university

Whereas the university was primarily comprised of researchers and support staff twenty years ago, the modern university performs wide variety of functions in addition to research and teaching.

“Today society demands that the universities live up to many more goals than before. They must contribute innovation. They must collaborate on addressing challenges like social mobility. They must tailor their degree programmes to the job market, which requires employer panels and analyses of where the jobs are,” Stage explains – and the list goes on:

from helping to evaluate European Capital of Culture Aarhus 2017 to accreditation for international recognition to applying for and administering external funding – a necessity driven by the increasing instability of government funding for higher education.

“At the same time, the universities are increasingly expected to account for what society is getting for its money – both in relation to education and research,” Stage says. 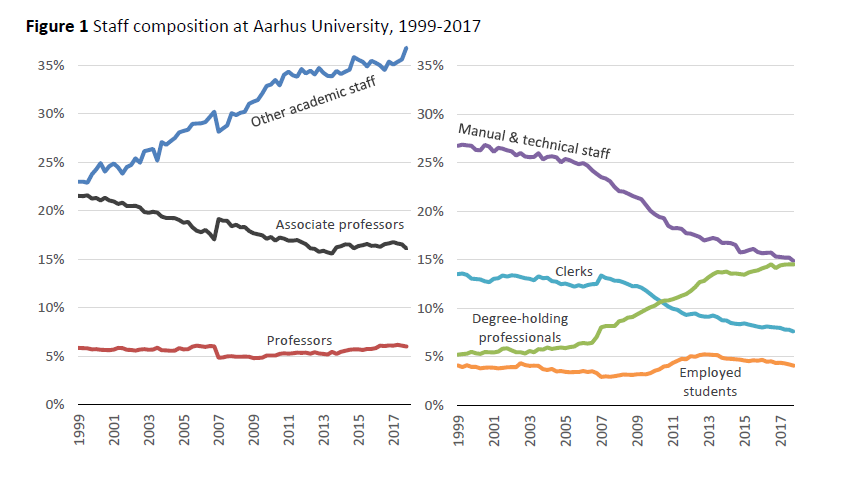 The graph is from Andreas Kjær Stage’s PhD dissertation.

Clerks: Vocation and clerical staff, including secretaries without university degrees

And performing all these new functions takes a new kind of employee. Stage rejects the widespread criticism of the increase in degree-holding professionals in the administration.

“You often hear that the same work is being performed for twice the salary. But I don’t see any evidence that we’re now hiring more expensive people to perform the same work as before. It seems clear to me that they work with completely different tasks, such as strategy, evaluation and grants. Those are completely different tasks than what we had twenty years ago,” he says.

However, he doesn’t necessarily believe that the criticism is unwarranted.

“It’s entirely legitimate to pose the question of whether the universities should be performing these tasks. But to a high degree, this is a question of political priorities,” he says.

What’s more, he adds, there is still very little data on precisely what kind of work the new breed of administrative employees performs.

What does an employee cost?

At the same time, Stage stresses that the widespread notion that administrative staff have mushroomed at the expense of academic staff is inaccurate.

On the other hand, the study does reveal that there have been significant changes within the academic staff group itself. The proportion of temporary employees has increased from just under one-fourth to over a third, while the proportion of associate professors has fallen significantly.

We don’t have to look far to find an explanation for this development.

“One factor is the PhD reform, which meant that the universities had to double the number of PhDs. And clearly, another factor is that more research is financed through projects in which a professor gets research funding to hire PhDs, postdocs or research assistants within the project.”

In addition, according to Stage, the many temporary positions also provide the universities’ executive management teams with more room to maneuver if they decide to prioritize a new research area and de-emphasize another. This is more difficult if your researchers are on permanent contracts.

“And then there’s the political demand for the universities to produce more manpower with research skills for the private labor market. This makes it more legitimate to have a lot of temporary employees because the intention is not for them to remain employed at the university at all.”