DTU is on the wagon – should AU hop on?

For the fourth year in a row, the Technical University of Denmark (DTU) is offering an alcohol-free freshers’ week trip. All 50 tickets are sold out, just like last year. AU doesn’t offer anything like this, though alcohol rules for freshers have been tightened up.

Welcome to freshers’ week in Denmark and welcome to beer bowling. Imagine that you’re lounging in a lawn chair with your bowling partner beside you, grass under your feet and sunlight on your face. Between you is an empty beer bottle. Your opponents are sitting across from you at a distance of a few yards in lawn chairs like your own, also with a beer bottle between them.

The referee nods, and your opponent rolls the ball toward the beer bottle between your partner and yourself. If she tips it over, you and your partner have to chug a beer – as fast as you can.

Most Danish university students have tried this – more likely than not during freshers’ week. And the game is generally called beer bowling, because that’s normally what’s on the label of the bottles. But it doesn’t have to be that way. At DTU (the Technical University of Denmark), the tutors – or vectors, as they’re known there – have reinvented the game, like the innovative engineers they are: they’ve replaced the beer with chocolate milk and soft drinks. ‘Diabetes bowling’ is now a big hit on alcohol-free freshers’ week trips.

The idea of organizing separate freshers’ week tips with and without alcohol was proposed back in 2014 by a keen student. The freshers’ week committee supported the idea, and the alcohol-free freshers’ week trip became a reality a year later. This year, all 50 tickets are sold out – just like last year, in fact.

But so what do they do, you might be thinking, especially if you’re familiar with Danish freshers’ week culture. Aren’t freshers’ week and alcohol basically synonymous in Denmark, where the legal drinking age is 18 for spirits and 16 for beer and wine?The answer is straightforward, according to Lars Holm, the chair of Polyteknisk Forening, which organizes all of the freshers’ week activities at DTU:

“We do exactly the same activities as on the other freshers’ week trips. You can do that, absolutely. You just have to understand that alcohol doesn’t have to be the decisive factor for us to have a conversation.”

Do you really play beer bowling without beer?

“Yes, we do. We just play it with a soft drink in our hand.” 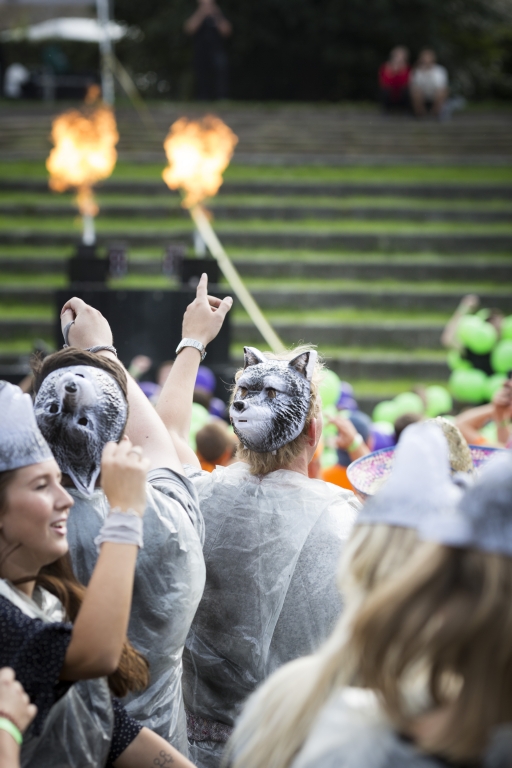 Some may object that students can’t get to know each other in the same way during freshers’ week without the social lubricant of alcohol. But according to Holm, this is a misconception:

“Sometimes alcohol is called a social lubricant, but it doesn’t have to be. We don’t need alcohol to have a conversation. Because you discover – to continue in the same terminology – that things go smoothly without it.”

And things are going smoothly at DTU. And with sold-out alcohol-free freshers’ week trips this year and last, the new tradition continues, just as the university has also included ‘sober days’ in the standard freshers’ trips since 2014.

None of these initiatives were introduced or encouraged by the university’s executive management. Nonetheless, DTU’s rector Anders Overgaard Bjarklev is pleased that students are confronting and remaking their alcohol culture:

Facts: When, how and how much are you allowed to drink?

There are minor differences in the faculties’ alcohol policies for freshers’ week. The following rules apply at Aarhus BSS:

1.     Tutors are subject to the alcohol policy of Aarhus University when they carry out work on behalf of the university.

2.     Neither tutors nor new students may drink alcohol before or during academic events, either in connection with freshers’ week events on the AU campus or off-campus. This means that alcohol is prohibited between 8am and 4pm during freshers’ week. However, in connection with specific activities, the director of studies may allow for the consumption of alcohol.

3.     The individual tutor group must ensure that during all activities there are tutors present who are not consuming alcohol.

4.     There must be a reasonable balance between academic and social activities during freshers’ week. All new students must feel welcome at all activities whether or not they consume alcohol. Saying no to alcohol must never result in the new student having to refrain from participating in an activity.

5.     The tutors are responsible for ensuring that all activities are conducted in a manner that does not require that the students consume alcohol.

6.     The tutors are responsible for ensuring that new students are not exposed to activities which transgress their personal boundaries or which they find offensive.

“I think it’s excellent. You know, I drive around with the deans every year to visit all the freshers on their trips, and I haven’t observed that they get less out of the alcohol-free trips. After all, the whole point of freshers’ trips is to get to know each other, and the best way to do that is if you can remember what was said and done the next day,” he comments.

Niels Overgaard Lehmann is vice-dean of the Faculty of Arts and vice-chair of the Education Committee. According to him, there are two factors keeping AU off the water wagon. First, AU’s freshers traditionally go on freshers’ trips with their own class, as opposed to DPU, where freshers are mixed up in one large group and are responsible for signing up for a freshers’ trip themselves. Second, he thinks it’s essential that if anything is to change, the impetus needs to come from the AU students themselves.

“Alcohol-free trips can be a good idea. But there’s a big difference in terms of where that idea comes from: if the students themselves want stricter rules, we will take that into consideration. But that’s very different from us as an organization behaving in a paternalistic way to the students,” says Vice-dean Lehmann.

But isn’t this precisely a tough, difficult case for a student to advocate in front of his or her fellow students?

“There would be a lot of diverging opinions in student circles, but that’s true of many issues, and is not particular to this one,” says Lehmann.

In his view, it’s a matter of avoiding undue paternalism while at the same time protecting the students who find the alcohol culture offensive. And the latter consideration is also behind the management’s decision to introduce a university-wide alcohol policy that applies to all faculties:

“Before that, there were some students who complained that you had to drink alcohol to participate in some events. Beer relay races and such. That’s how it was some years ago. It was part of social integration. But as social attitudes changed, what was formerly an accepted part of the culture became a problem. Some felt that it was offensive, and in that situation it’s clear that we as an organization reacted with ‘Hey, we need to deal with this’,” he explains.

According to AU’s current alcohol policy, drinking alcohol can’t be made a precondition for participating in a university activity. Another rule which has had a major impact on freshers’ week is the so-called ‘8 to 4’ rule, which means – you guessed it – that the beer taps are shut off during normal working hours, at most faculties defined as between 8am and 4pm. The exception is the Faculty of Health, where the rules state that alcohol is forbidden during “academic activities”. But according to the faculty management team, the result is de facto the same. 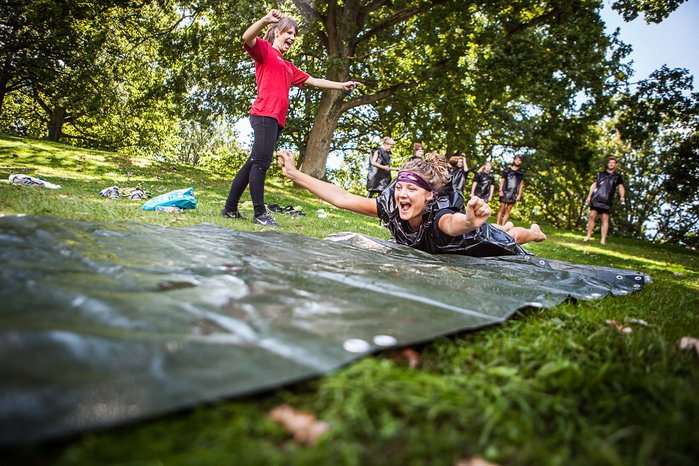 This rule is the reason why the poly sci students couldn’t hold their traditional freshers’ week park run this year. The run used to feature lots of high jinks and shenanigans in the University Park involving battle cries, costumes and a fair amount of beer – in shopping carts as a rule – in the middle of the day, no less.

“We knew about it from the beginning, but sure, it’s super annoying. In the past few years, several freshers wrote in their evaluations that it was the best day of their lives,” says Andersen.

But there were also students who weren’t enthusiastic about the park run: it was divisive. And even if the new restrictions hadn’t put an end to the park run, the two freshers’ week secretaries would probably have cut back on the number of beer stations and the general mayhem:

“There wasn’t one second of calm during it,” Elvstrøm stresses.

Should we turn down the volume?

In Vice-dean Lehmann’s view, the park run is a good example of the issue at hand, and the considerations the management has to take into account:

“Here you have the matter in a nutshell. When it turns out that there are students who are dissatisfied with an activity like that, we have to tighten up the rules. This means that some traditions – which were previously legitimate and unchallenged – have to fall by the wayside. So that’s why the response to the tutors is ‘Yes, it’s regrettable, but the times have changed, and there are some people who don’t think it’s so great, and so we have to be stricter’,” says the vice-dean.

This year, the park run was replaced by a genuine sports run in the University Park and a treasure hunt downtown. And the freshers’ week secretaries are basically satisfied that it was management that set the rules:

“It’s nice that it’s now the same for all the degree programmes, because it’s hard to stand there at Political Science and say that we can’t drink before 4pm if there are drunk law students running around,” says Andersen.

“We like diversity, and we cultivate it with great enthusiasm. If you want to join in, you can join in – whether you want to drink buttermilk or not. We’re glad that we’re not the same,” says Bjarklev.

But isn’t inclusion precisely an argument for reducing alcohol consumption and getting the students who don’t drink to join the ordinary trips instead of dividing them into two groups?

“Yes, that may be,” says Bjarklev. But he points out that it’s not the amount of booze guzzled during a freshers’ trip that determines whether a new student wants to join in or not:

“No, it’s what they’ve heard their friends talk about, and what they’ve read in the papers about some freshers’ trip that went wrong. We know that freshers’ trips have a dubious reputation, and so I think that it’s a fine option for students to have, so that no one gets scared off.”

Rector Bjarklev’s diversity argument doesn’t change anything for Vice-dean Lehmann, however. There are no buttermilk trips on the drawing board for Aarhus University yet.

“It’s fantastic that the students at DTU took the initiative, because it’s certainly possible that it’s doing something positive for diversity. So I will say as well that if the students think it’s the right move, then of course we’ll discuss whether the rules are in keeping with the times, and whether they’re strict enough to make sure that no students suffer harm at AU,” says Lehmann.