Several department heads at AU deny that gender plays a role when they assess applicants for associate professor and professor positions. But according to PhD Mathias Wullum Nielsen, some structural mechanisms exist which may contribute to forcing women out of the university.

"That is not something you look at WHATSOEVER… not in any way, whether it’s a man or a woman, when you begin selection. It has nothing to do with that. There you only look at qualifications, and I would venture to say, though it’s obvious enough, that women sometimes have some different conditions than we have as men in terms of career paths ... that’s just the way it is ... or you could do something about that. We can work on this … or it ... if that’s what you mean. No one looks at whether it’s a man or a woman. You don’t think ‘We would rather have a man' or 'We would rather have a woman’, it’s never like that."

If the management at AU want to rectify the skewed gender balance among the academic staff, the current approach to gender equality needs to change, says PhD at the Department of Political Science and Government, Mathias Wullum Nielsen. Together with a team of research colleagues he is behind the as yet unpublished report Equal opportunities at Aarhus University: Status and Challenges.

"Instead of talking about actual gender discrimination like they do in Norway and Sweden, here in Denmark we focus on preferences and choice," he says.

This removes focus from the underlying structures and risks making women victims of rigid notions on gender.

In the report a number of anonymous department heads describe the research world as harsh, individualist and characterised by competition and machismo. In contrast to this, the heads characterise women as less confident, less competitive strategists and with a greater need for job security.

"There are some general ideas about men and women that shine through the statements made by the department heads and which help to stigmatise women. They are also used to explain why they are not better represented among associate professors and professors at AU," says Mathias Wullum Nielsen. 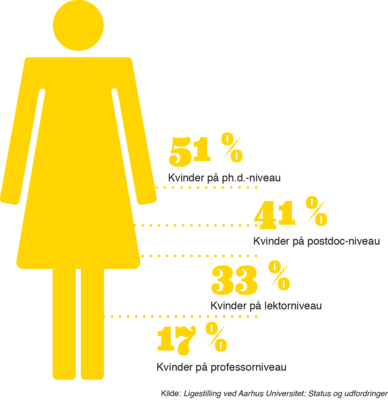 Making things worse is the fact that the gender stereotypes have a negative influence on how men assess women's performance, says Nielsen, who also does not ascribe to the idea that a competitive culture is specifically masculine.

"We also see many men who choose to leave the universities due to this culture," he says.

The statements also represent an idea of the research environment being controlled by specific logics which cannot be altered, says Nielsen.

This is also challenged by the authors of the report.

"We instead encourage a discussion of how management can make the research environment more inclusive and also that they consider whether a competitive, egoistic environment actually means more and better research," says Nielsen.

It is also crucial that the department heads focus less on the number of publications and more on research potential when recruiting talents to associate professor and professor positions. In this way, a desire to start a family will not destroy a career.

"Specifically, if a young woman at PhD level become pregnant then that influences her research output. Here you must look at the long-term perspective and give the person the opportunity to develop their potential," says Nielsen.

As the report puts it, it is in general necessary to have a discussion about "… how research work can be made more flexible and family-friendly." This also applies in relation to the requirement for a study abroad period, which can be difficult to combine with having a partner and children.

The system needs fixing - not the women

The current situation means that the female researchers "… appear to be less satisfied with their future career opportunities at AU than their male colleagues. They feel less secure in their jobs and have given more thought to opting out of a AU research career." This is how the authors of the report interpret the most recent workplace assessment from 2012.

According to Mathias Wullum Nielsen it is difficult to interpret the influence of stigmatisation and practical conditions here. But if management reduces the issue of gender to a question of choosing or opting out of an academic career, then it will be difficult to change anything, he says.

"You cannot separate choice from structures. It is therefore important to identify the challenges that women face to a greater degree than men at the university."

22 of the current 28 department heads at AU are men.

According to AU's Psychological Workplace Assessment (WPA) from 2012, male researchers across all levels of seniority spend more time on research than their female colleagues, who give a higher degree of priority to other activities.