Department of Management is facing redundancies

The Department of Management needs to save up to DKK 10 million, which could involve up to 15 employees losing their jobs, says head of department Jacob Kjær Eskildsen. Employees at the department are shocked and surprised, claims the union representative.

At the end of January, employees at the Department of Management were informed that the department was facing a major round of cutbacks this year. The department needs to save up to DKK 10 million to balance its budget in 2023. To achieve savings of this magnitude, we cannot avoid redundancies, explains head of department Jacob Kjær Eskildsen.

“Without measures to prevent redundancies, we are talking about up to 15 jobs, but we are now in the process of exploring whether we can reduce this figure through voluntary redundancies and senior agreements. We expect to have the final overview at the end of February.”

There are three reasons why the department’s accounts ended up in the red, explains Jacob Kjær Eskildsen.

“Firstly, an unusually high number of students who were offered a place on the BSc in Economics and Business Administration (Business Administration, ed.) this summer chose not to start their degree. And that loss of revenue will stay with us for five years,” explains Jacob Kjær Eskildsen.

He can only speculate as to why so many students chose not to take up their place.

“We have never experienced it to this extent before, but it could have something to do with the Corona situation brightening over the summer and students choosing to take a year off instead and pursuing travel plans they had put on hold during the pandemic,” he says.

The second reason for the department having to save money is a change in the way the quality grant is paid to university degree programmes. Until now, the grant has been paid on the basis of student full time equivalents (FTEs), but, in the future, it will be awarded for selected initiatives.

MORE ON THIS STORY:  English-taught degree programmes to disappear from the Faculty of Arts

“The final student FTE funding for these programmes disappeared in 2021, but we still have payroll costs associated with them,” explains Jacob Kjær Eskildsen. 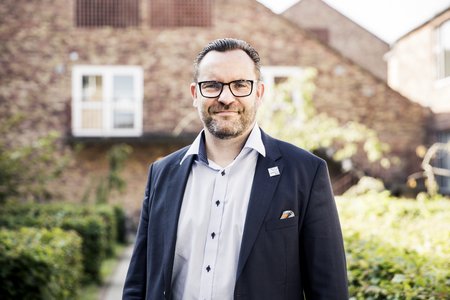 In the minutes from the meeting of the local liaison committee in January, Jacob Kjær Eskildsen explains: “...that the budget adjustment process will also create space for and make it possible to prioritise the department’s strategic initiatives, for example in relation to strengthening strategic efforts and subject areas such as financial management”.

Is this a way of saying that you, as a management team, are also using the cutbacks to create scope for strategic initiatives?

“I think we are exercising due diligence so that, on the one hand, we ensure that we balance our budget in the future but that, on the other hand, we can actually continue to develop and invest in our research and education. For example, we need to employ more academic staff within the area of financial management, where we currently lack employees and where we therefore cannot guarantee that employees have as much time for their research as others,” says Jacob Kjær Eskildsen and continues:

“We have a specific need to recruit within a specific area, and this concerns 1-2 positions. But I am also aware that we need to consider how appropriate it is to hire at the same time as we make redundancies.”

When there is talk of strategic initiatives in connection with a savings process, this can create uncertainty, especially among employees who don’t necessarily work in areas that are considered strategic priorities.

“We must always support our strategy, and therefore it is only natural that there will be areas that require particular attention and perhaps also extra investment. We have to deal with the fact that we have closed down degree programmes in some areas but that we do not have enough staff in other areas.”

On this basis, are some groups of employees more vulnerable than others?

“No, we are looking at our overall activities and our future needs. In principle, all groups of employees, including academic staff and technical/administrative staff, can be affected,” says Jacob Kjær Eskildsen.

What role will the relocation agreement play for the department – could it lead to further cutbacks?

“It is too early to say, because the agreement is being negotiated at the moment, and we don’t yet know the final outcome. What is relevant for the department in relation to the relocation agreement is that student places are moving to Herning, so some employees will have to change their place of employment. We don’t expect that this will involve further cutbacks,” says Jacob Kjær Eskildsen.

News about the cutbacks was met with shock from the department’s employees, explains associate professor Bjarne Rerup Schlichter, who is the union representative for academic staff (VIP) at the department. And the uncertainty surrounding the implications of the relocation agreement of course does not help, he explains.

“Employees fear there may be two rounds of cutbacks,” says Bjarne Rerup Schlichter.

“Employees are shocked. Because we had the impression that things were going well. As late as last summer, we were told that everything was fine with the amount of external funding coming into the department. So many of us are surprised – also that the management didn’t recognise the situation sooner,” says Bjarne Rerup Schlichter.

He goes on to say that it is a cause for concern among the staff in the department that savings have to be made so quickly in order to balance the budget as early as next year.

“As we are talking about permanent cutbacks, it is the permanent members of academic and technical/administrative staff who are particularly worried about their jobs,” says Bjarne Rerup Schlichter, who also acknowledges the current attempts being made to investigate ways to avoid redundancies.

“The dialogue is taking place in a proper way, and I also hope that the management will take advantage of the option to transfer employees within the organisation,” he says.

Caroline Adolphsen is associate professor at the Department of Law and joint union representative for academic staff at Aarhus BSS as well as acting union representative for administrative employees with an academic background (AC-TAP) at the Department of Management. She would have liked the issue to have been brought up earlier in the local liaison committee.

“It is frustrating that we were only informed about the seriousness of the situation in January, when one of the reasons for the cutbacks is declining student numbers, which is something that becomes apparent in August-September,” says Caroline Adolphsen.