A little too much bling-bling for the rector

First there was one. Then two. And now there are three rector’s chains of office. And although wearing three heavy gold chains at once would probably get Rector Brian Bech Nielsen some street cred in the hip hop scene, it’s two too many for a modest guy from western Jutland.

On an otherwise ordinary spring day, the rector’s secretary Birgit Svenningsen received a mail that made her eyes widen in surprise.

Danske Bank’s branch on Stjernepladsen in Aarhus, just north of the Nobel Park, was closing, and all the bank boxes had to be emptied. Including box number 5009, which belonged to Aarhus University.

“Do you have a key to the box?” the mail read. Svenningsen did not have a key. In fact , she hadn’t even known that the box existed – and she had no idea what was inside.

So she knocked on Rector Bech Nielsen’s door and got him involved in the case.

“He was so curious that he was ready to go on over to Stjernepladsen to open the bank box,” she says.

However, ultimately the bank box was opened by the university’s finance department, letter of authority in hand.

“And in the dish towel, there lay a rectoral chain of office made of gold. How and when it ended up there, nobody knows, apparently,” Svenningsen says.

The chain is from 1958, a gift from dentists in Aarhus to the then Aarhus School of Dentistry, which merged with the then Faculty of Medicine at Aarhus University in 1992. It features a medallion with a relief of Saint Apollonia, the patron saint of dentists and toothaches, as well as a relief of the Aarhus town arms.

Lost in the mists of time

“It looks like it’s been a long time since it was last used. Because the chain is composed of emblems engraved with the names of the successive rectors. The last name on the chain is Sven Poulsen, who became rector in 1987, and there’s no end date,” Svenningsen explains.

Sven Poulsen is now emeritus professor at the Department of Dentistry and Oral Health, and was rector of the Aarhus School of Dentistry from 1987 to 1991.

He remembers that he wore the chain of office several times a year as rector: When welcoming new students, at graduation ceremonies, at the annual celebration and at dissertation defenses.

“The last time I wore it must have been at the graduation in 1991, or maybe when we welcomed the new students the same year,” he says.

“It was stored in the School of Dentistry’s safe in a plush-lined box with a lid when I wasn’t wearing it.”

How it ended up in a tea towel in a bank box in Danske Bank’s Stjernepladsen branch, he has no idea. Poulsen stepped down from the position of rector a few months before the merger with the Faculty of Medicine. In the interim, pro-rector Thorkild Karring served as acting rector of the School of Dentistry.

“So he’s possibly the last person to have worn the chain, but he’s unfortunately dead now. And unfortunately, my former secretary Lis Brandt is too. She was the one who helped me get the chain on and off in connection with the ceremonial occasions,” Poulsen remembers.

The former rector is pleased that the chain of office has suddenly popped up.

“It’s a treasure. The chain of office was a gift from several dentists in Jutland who were very actively involved in getting a school of dentistry established in Aarhus, because there was very poor access to dental care in Jutland,” he explains.

An embarrassment of riches 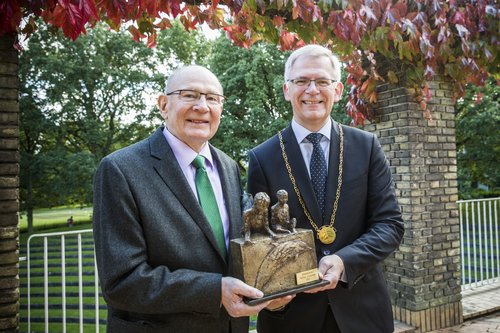 When the Aarhus School of Business merged with Aarhus University in 2007, the university inherited yet another chain of office, which is now stored next to the AU rector chain of office in a safe in the basement under the Rector’s Office. 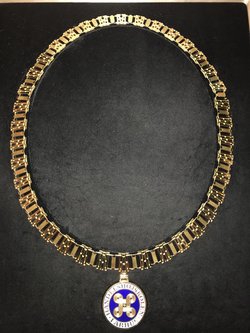 The chain of office from Aarhus School of Business. Photo: Marie Groth Andersen.

“As far as I know, it hasn’t been used since,” Birgit says.

Unlike your average American hip-hop star, one heavy gold chain is enough for AU’s rector. Well, almost enough. Because there’s also cheaper copy of the original rector’s chain of office – a travel model the rector can bring along if he needs to represent the university in his full rectoral splendour abroad.

Chain of office, anyone?

Birgit Svenningsen explains that the plan is now to store all three rectoral chains of office (plus the cheap travel model) together in the Rector's Office safe.

“We don’t want to end up in the same situation again, with no one knowing where the chains of office are,” she smiles.

“If there are deans or department heads who want to borrow the chains of office from the School of Business or the School of Dentistry for special occasions, the rector can loan them out,” she adds.

Forgotten chain of office back in use again

In fact, the chain of office from the Aarhus School of Dentistry was recently on loan to the head of the Department of Dentistry and Oral Health, Siri Beier Jensen, who wore it in connection with the graduation ceremony for dentists, dental hygienists, clinical dental technicians and dental surgery assistants in the Main Hall in June. 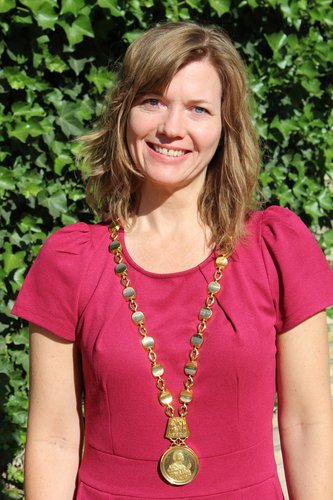 “Me wearing the chain of office was our dean at Health Lars Bo Nielsen’s idea. He called me up and told me with excitement about how the old rectoral chain of office from the School of Dentistry had been rediscovered, and suggested that I wear the chain at the graduation ceremony, which is the first joint graduation for all of the department’s degree programmes,” Jensen says.

“It was a great honour to wear the chain of office on this occasion, when we celebrated the graduates of our degree programmes under one roof for the first time and demonstrated that we are one unified department,” Jensen says.

She adds that a number of employees at the department would like to see the chain of office come home.

“We have the original case for the rectoral chain of office in our massive old M.H. Jæger safe. But that said, I actually think it sends the right signal for the rector to have it, so he can delegate the privilege of wearing the chain of office. It emphasises that we are part of the university,” she concludes.

A punch in the stomach from Saint Apollonia

Jensen anticipates that she’ll only be borrowing the chain in connection with graduation ceremonies.

“Or if the Queen comes to visit.”

And now she has first-hand knowledge of what’s involved in the rather strenuous honour of wearing the rectoral chain of honour. For better or for worse.

“It’s clear that it’s not designed for dresses. It was made to be attached to a suit jacket. There are pins you can attach to the shoulder pads and the lapel of the jacket to keep the chain from slipping and the medallion from hanging there and bumping into you. But it doesn’t really work on a dress, so the medallion punched me in the stomach several times during the day, and then you have to have strong muscles in your head and neck, because it’s heavy to wear for hours at a time.”