On leave from AU: Thanks for your email. I’m out of office. I’ll be in Asia for the next four months...

Dorthe Hagen Nielsen took a leave of absence from her job as research group coordinator at AU, strapped on a backpack and travelled around Southeast Asia with her husband and three daughters – ages 3,6 and 8 –for four months.

Dorthe Haagen Nielsen wrote a series of blog posts before and during the trip. Partly as a kind of digital travel diary, and partly to inspire others who might be dreaming of the same kind of adventure.

In her blog, you can read about the family’s preparations for the trip, how they travelled and their budget. The blog is in Danish.

Over the Christmas holiday last year, Dorte Haagen Nielsen was troubled by a nagging sense of guilt about the decision she and her husband had made many months before. They had both taken four months’ leave from their jobs, bought five plane tickets to Cambodia, subleased their house and lent their car to some friends.

“We were feeling guilty about dragging the girls away from their secure daily routines. This wasn’t their dream; it was mine and Christian’s. The most difficult thing about this trip was definitely making the decision to do it,” remembers Dorthe Haagen Nielsen, who is a research group coordinator at the Department of Computer Science.

But on Monday 1 January, the family boarded a plane to Phnom Penh in Cambodia, where they had booked three nights at a hotel just to get their bearings before they travelled onward, first in Cambodia and then to Vietnam, Thailand and Malaysia

Dorthe has always had an “absurd wanderlust”, as she puts it, and she took her first backpacking trip to Southeast Asia at the age of 20. She has returned several times since then, including together with her husband Christian, who shares her passion for Asia. 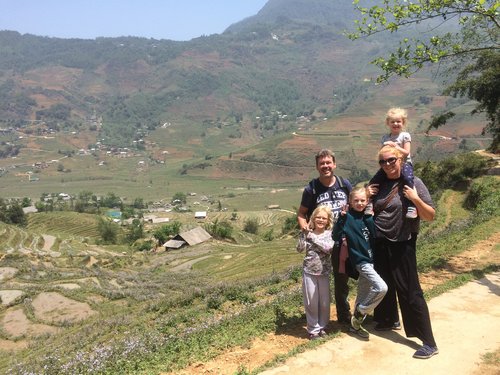 “So we were absolutely sure that our big trip together as a family would go to Asia,” Dorthe says.

The family had already travelled together quite a lot, but not for months like on this trip.

“Travelling has always been one of the premises of our relationship, including with our children. So the children are seasoned travellers. When I was centre administrator at a Sino-Danish Center under the Danish National Research Foundation, the kids and Christian went to China with me for two weeks on two separate occasions,” Dorthe explains. 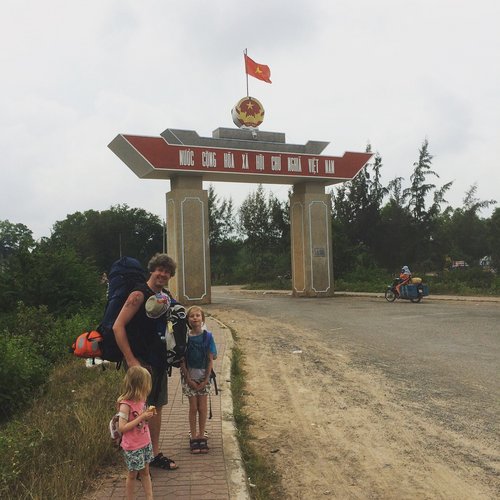 On foot in the no-man’s-land between Cambodia and Vietnam Photo: Private.

“The children are good and curious travel companions. And our girls have had an easy time of moving on from one place to another on our trips. When it was time to move on, they just put on their backpacks and followed along.”

“We’ve encountered great hospitality which we haven’t encountered elsewhere when we’ve travelled with our kids. In Europe, you can feel that you’re a bit of an inconvenience when you go into a restaurant with three children. That’s not at all how it is in Asia. On the contrary.”

However, the family’s trip got off to a rather tough start. Just one week into the holiday, all five of them came down with attacks of vomiting, one after another. Dorthe was the last family member to be hit, and after helping three sick children puking in the WC in their hotel room, she found it a bit difficult to see what was so fantastic about spending four months away from the comforts of home.

But when the family was back on their feet again, they travelled onward to the former French colonial city of Kep and checked into a clean new hotel on a quiet beach to recharge their batteries for the remainder of the trip.

“Even though it cost $50 per night, which was half of our daily budget, it was worth it. After a few days, our good spirits returned.”

Dorthe is an experienced backpacker, and she’s used to living on next to nothing when she travels. But while her husband Christian also enjoys backpacking, he prefers a little more comfort. And with three small girls under the age of eight accompanying them, they chose to upgrade their standard a bit to what they call a ‘flashpacker holiday’. Although they were still backpacking, it was a little flashier than what  conventional backpackers with thin wallets would permit themselves. 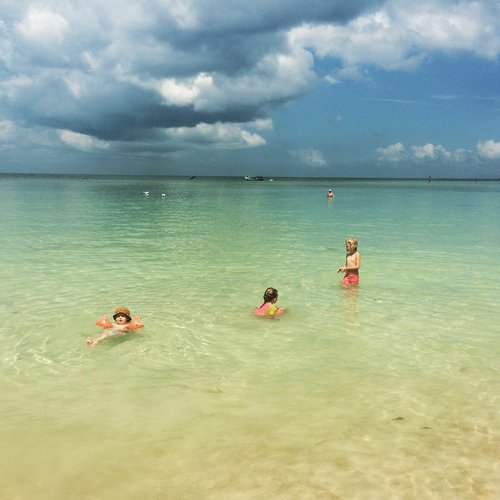 On the beach at Koh Phangan, Thailand Photo: Private.

“We prioritised safety, proper sanitary conditions and having our own room instead of sleeping in group rooms,” explains Dorthe.

“But we ate with the locals – because that’s where the good food is. So we kept an eye out for the restaurants where the locals were standing in line, and we’ve also eaten street food. As long as the food is heated through properly and prepared while you wait, it’s ok.”

Their budget was approximately 100 dollars per day, or about 650 kroner, and this had to cover accommodations, travel expenses and food for all five of them.

“That’s yet another reason we chose Asia. Because it’s easy to live cheaply here,” Dorthe says.

After Cambodia, the family travelled onward to Vietnam, which Dorthe describes as the highlight of the trip, after which they continued on to Thailand and Malaysia.

In Thailand the holiday took a more dramatic – and frightening – turn. An otherwise peaceful day at the beach ended abruptly with sirens and flashing lights when Dorthe’s eldest daughter dropped a large granite rock on her foot.

“I heard a scream, and my daughter went completely white, and her foot swelled up to twice its normal size. I thought she’d crushed her foot under that big rock. My husband drove off with her in a tuk tuk to the closest medical clinic, and they were sent on to a hospital in an ambulance for X-rays. Fortunately, her foot wasn’t broken, and it healed with kisses, hugs and aspirin,” Dorthe concludes.

With the exception of the bruised foot and a nail which was ripped off during a bike ride, the family didn’t have any major accidents during their travels. 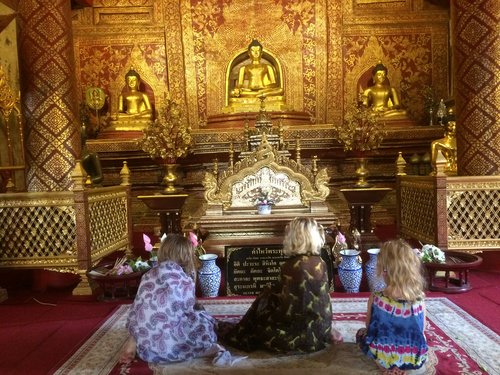 “We’ve really been spared. There was a little stomach trouble, and the youngest had a fever for a few days, but otherwise nothing, and when you think about how often children are sick during the winter months in Denmark, we really got off easy,” says Dorthe. 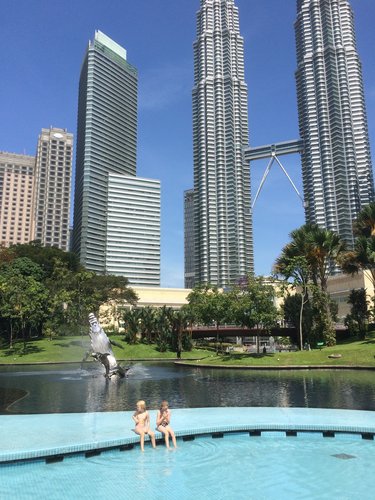 After four months under the Southeast Asian sun, the family returned to Denmark on 1 May. The goal of the trip was to get away from the daily hamster wheel and have lots of time together as a family. And they succeeded. The family felt a closeness during their trip which all of them have missed since returning home.

“Most days, we woke up together in the same hotel bed. To have plenty of time together with the people you care about most in the whole world and have them close to you all the time –that’s been a gift,” Dorthe says.

Dorthe’s 6-year-old middle daughter in particular has been affected by the return to the daily routines of life in Denmark, and that mom and dad have to go to work for hours every day.

“She misses us when she’s at school. It’s something she feels very deeply, that it was a good time together as a family. And it makes a big impression on us, seeing how the choices we make as parents affect our children,” Dorthe reflects.

The good life is about time

“For me, it’s not about my career. It’s about how we create a good life where we have time with the kids and the family and can be present in the here and now. That’s what gives us the greatest value. And it’s really been cool to have time to reflect, because there’s no time for that in our daily lives.”

Dorthe Haagen Nielsen wrote a series of blog posts before and during the trip. Partly as a kind of digital travel diary, and partly to inspire others who might be dreaming of the same kind of adventure.

In her blog, you can read about the family’s preparations for the trip, how they travelled and their budget. The blog is in Danish.