Every time one of AU’s prizes of honour goes to a woman, four go to a man. An associate professor at AU thinks this sends an unfortunate signal and calls for more diversity among the researchers that the university chooses to honour. The rector pleads guilty, admits it is not good enough, and promises to thoroughly review the practice.

When Rector Brian Bech Nielsen confers four new honorary doctorates at the university’s annual celebration on Friday, all four of them will go to men. Just like last year. In fact, you must go all the way back to 2012 to find even one woman among the researchers that AU has decided to honour with the highest academic honour a researcher can receive.

Associate professor: a lack of diversity

When Lone Koefoed Hansen, associate professor at the School of Communication and Culture at Arts, recently saw the list of new honorary doctors, she took her dissatisfaction with the lack of diversity among the names straight to Twitter and Facebook.

"I simply can’t imagine four women being honoured four years in a row, and that fact alone shows that something is wrong here. It makes sense that there weren’t previously women among those being honoured because there were fewer female researchers. But today we ought to have reached a point where we could see that change," she says.

In her opinion, some very unfortunate signals are being sent; both in relation to the outside world and internally at the university when AU chooses to only honour men for several years in a row:

"It’s difficult to say whether it (being named an honorary doctor, ed.) has any real value, but in any case it’s still a prestigious title that the university itself controls. I personally feel that it simply can’t be right. We’ve just got an action plan for more women in research, and whoops, two months later they announce four new honorary doctorates without any women among them. I think that’s a real shame," says the associate professor.

She emphasises that she does not dispute the qualifications of the four men being honoured, but she challenges what is, according to her, a structural problem arising from only appointing men over several years.

AU has conferred honorary doctorates since 1946, and the university's website states that the honorary award is given to researchers who “are deemed to have achieved such outstanding scientific results that it is considered natural to honour them with the highest academic degree”. A majority of the honorary doctors are or have been internationally recognised foreign researchers that the university wishes to collaborate with. AU has appointed 110 of them in total, and only five are women.

Rector: Nothing to be proud of

"What really interests me is how things will look like in the future. There’s nothing to be proud of in these figures. The university is guilty and has no defence to offer. But we’re working on it," says the rector.

The recommendations from the faculties and academic councils for this year's honorary doctors were already made in the spring. The senior management team decided to respect the recommendations. However, at the same time they decided that candidates from both genders must in future be recommended by each faculty to the senior management team, who then take the final decision on the honorary doctors for that year.

The rector points out that the new action plan for more women in research also applies to the conferring of honorary doctorates and prizes. He also emphasises that the figures send an unfortunate signal:

"Of course it's a poor signal to send, let’s say it like it is. I can only say that it isn’t good enough, but that we chose to follow the recommendations this year," admits Brian Bech Nielsen.

Prompted by Lone Koefoed Hansen’s tweets, Omnibus has reviewed the lists of recipients of the various honorary awards and prizes conferred by AU. Gender inequality does not only apply to honorary doctors. 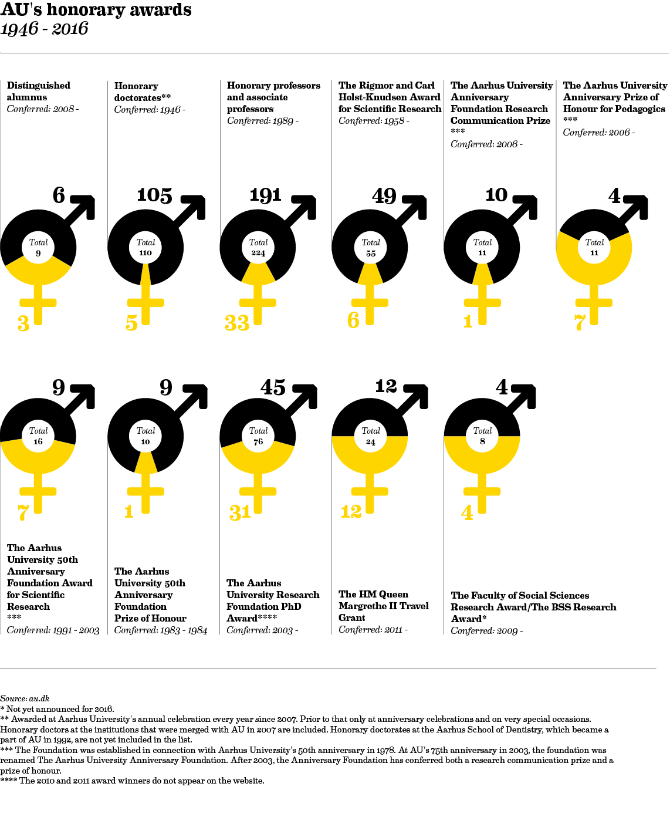 According to Hansen, the fact that the list of honorary award recipients contains far less female researchers than men also affects the way we act:

"It's not because people don’t want to change, it’s just that recognising one’s own bias is a very difficult thing to do. We don’t even realise that there is gender equality before someone is suddenly standing on the sidelines asking what the hell is going on."

The rector tells Omnibus that the procedure for the appointment of honorary doctors is not the only thing that will be reviewed:

"We need to look at all recommendations, also for academic and scientific prizes. The numbers speak for themselves. One of the reasons why there has been this inequality is that we’ve had many more male staff in tenured positions at the university. This remains the case and it’s not as if you must to be ruled out if you’re a man. But there must be equal opportunities regardless of whether you’re a male or female talent."

Hansen’s reply to this is:

"More women than men fall by the wayside on the way to the top of the research ladder. Fortunately, that’s something that AU is focusing on with the new action plan for women in research and other initiatives. But on the other hand, we don’t know whether everyone really has equal opportunities right now. With it being five years since an academic council recommended a woman as an honorary doctor, is this because the council members subconsciously favour male senior researchers? There is lots of practice and research which points to what we think of as neutral selection containing hidden gender and diversity bias."

In 2009, AU launched the gender equality initiative 'Bringing all talents into play', so it is correct to say that gender equality has been a theme at AU for a number of years. To the question of why so few women have nevertheless been named as honorary doctors since then, the rector replies:

"I can only say that it’s correct that we’ve been focusing on this, but not to a sufficient extent. This is important as it’s also about being honoured and recognised regardless of gender. So I fully accept this criticism and say that it’s simply not good enough."

Women are honoured for pedagogics, not for research

Lone Koefoed Hansen notices one thing in particular in Omnibus’ overview of honorary awards presented at AU. That the only prize received by woman more often than men is the Aarhus University Anniversary Foundation Prize of Honour for Pedagogics. This has gone to a woman seven out of ten times, while the foundation's research communication prize has only gone to a woman once out of ten times.

"It’s striking that when women are honoured in this organisation it’s for educational work and not for research. Of course we’re also a strong educational institution, so that’s also fine. But in the research community, being a better teacher than researcher is absolutely not as prestigious," says the associate professor. She herself received the prize of honour for pedagogics in 2012.

Prestige in research rather than pedagogics

"Thanks, it’s nice. I was happy to receive it and I’ve benefited from it. But it's really striking that men are honoured for one thing, and women for another," she says and adds:

"The younger researchers easily perceive these kind of patterns, so in this way the honorary awards we give today are also helping to mould the employees we’ll have in the future."

The rector agrees that nine out of ten awards going to men is a very lopsided distribution.

"It certainly shows that there’s a need for awareness here. That the score is 7-3 to the women as far as the prize of honour for pedagogics is concerned is in itself very lopsided. I can only say that we all need to raise our awareness when we recommend talents, so that we can start to remedy this gender inequality. This is true for all prizes and for honorary doctorates," says the rector.