Residence Hall 1 before and after

For over six months, workmen have been banging away on an interior renovation of Residence Hall 1, which was stripped down to the bare walls. Now the sparkling new communal kitchens and spotless rooms are ready to welcome student residents.

Residence Hall 1 looks like its familiar old self from the outside. Apart from the fact that the balconies have been cleaned and had their railings painted. If you look closely, you can also see that new windows and doors have been put in – which are virtually identical to the old ones. The major changes are all on the inside. 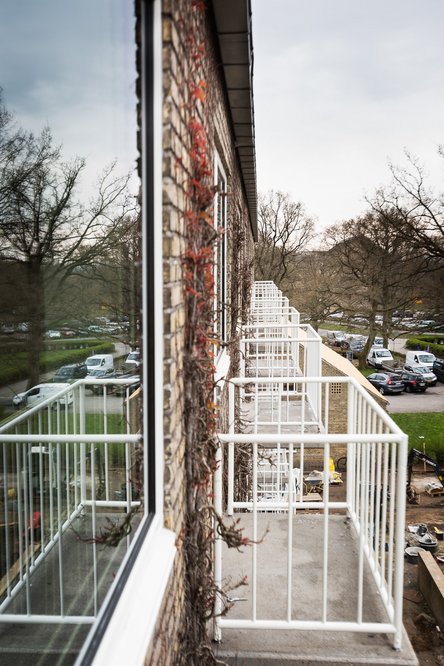 The staircase looks more or less as it did when the architect C.F. Møller first designed it. 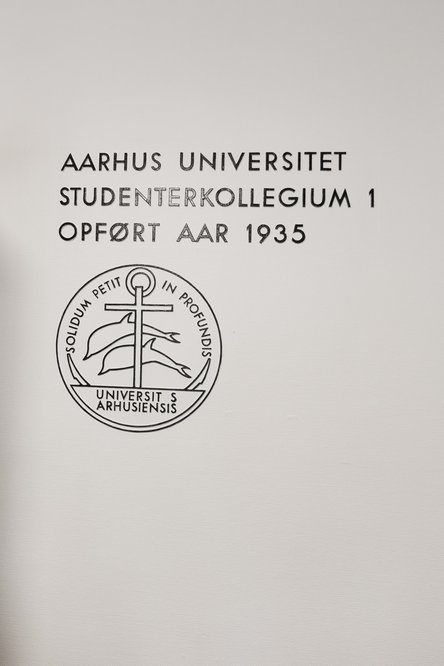 But there’s not much original left in the corridors. New linoleum flooring has been put in, the walls are freshly painted, the ceiling is clad with Troldtekt acoustic panels, and the width of the corridors has been reduced. This was done to make room for private bathrooms in all of the rooms: to avoid fittings like ventilation and downpipes taking up too much space in the 14m2rooms, the corridors have been narrowed to accommodate them. Now that the corridors are narrower, you’re not allowed to leave shoes or have plants in the corridor. 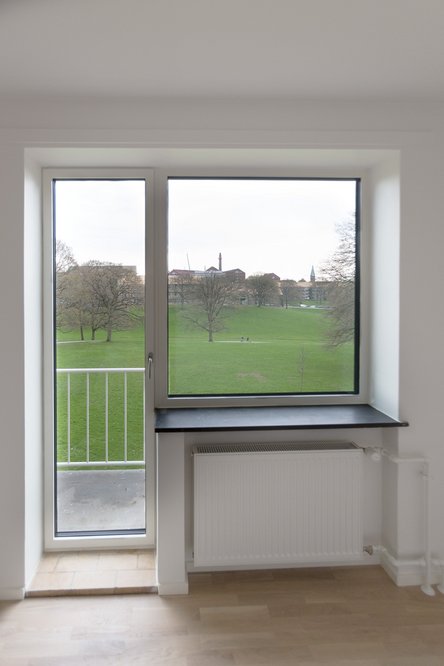 In line with the wishes of the residents, the doors to the rooms are made of oak, which is the only species of tree in the University Park. The floors are also oak, and all fixtures are new. With the exception of the old windowsills, which have been preserved wherever possible, including water stains from the flower pots and beer bottles of the past. 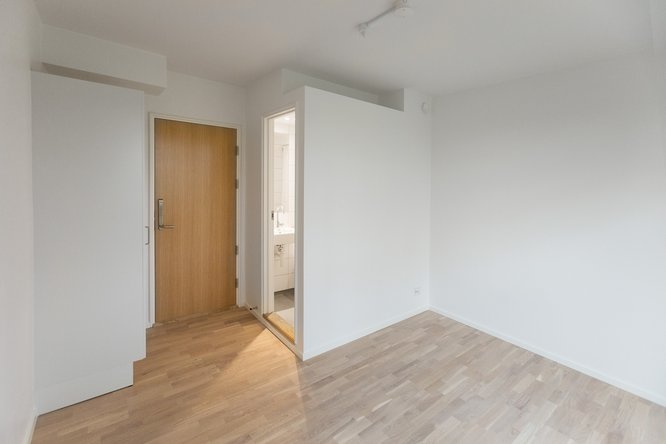 The biggest change is that the rooms now have private bathrooms. They’ve also been furnished with a simple wardrobe and a coat rack between the wardrobe and the door. 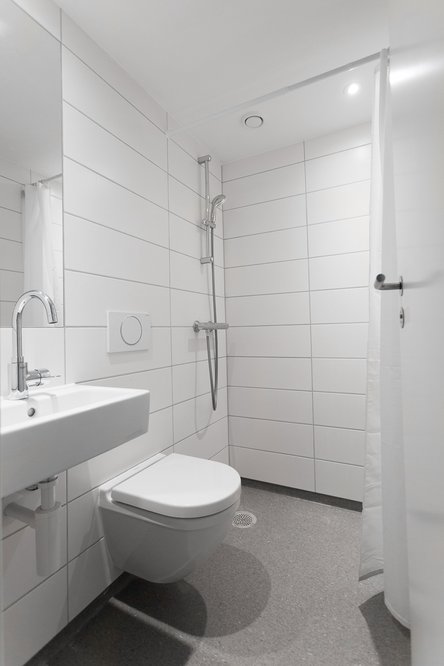 While there’s not a lot of space to dance in the bathroom, you can fill a water bottle or an electric kettle at the sink.

By way of comparison, here’s a photo of residence hall council chair Jakob Wadsager’s room. He lives in one of the other residence halls in the University Park, not in Residence Hall 1, and he doesn’t have a private bathroom. Residents were very critical about sacrificing precious square metres of space to put in bathrooms, and were also concerned that they would create problems with damp and noise.

READ MORE: Students: No thanks to own toilet and bathroom in the halls of residence 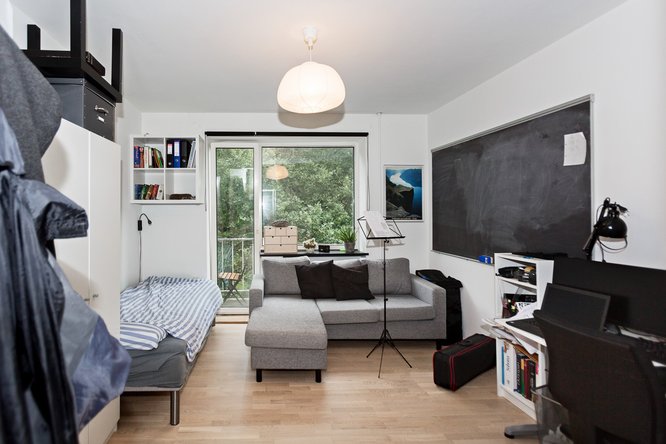 The old bicycle storage cellars on the ground floor have been replaced by two handicap-accessible rooms, which are twice as large as the other rooms in the residence hall to accommodate wheelchairs. The rooms are a little below ground level, but they have big windows. 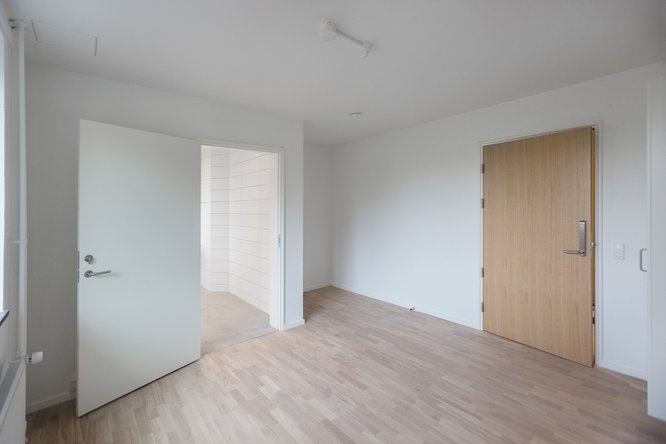 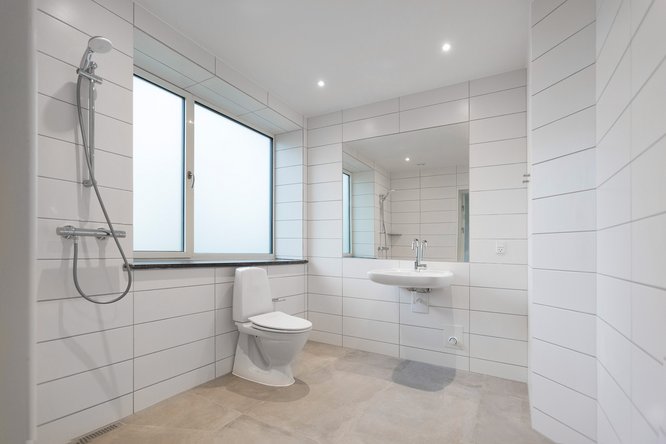 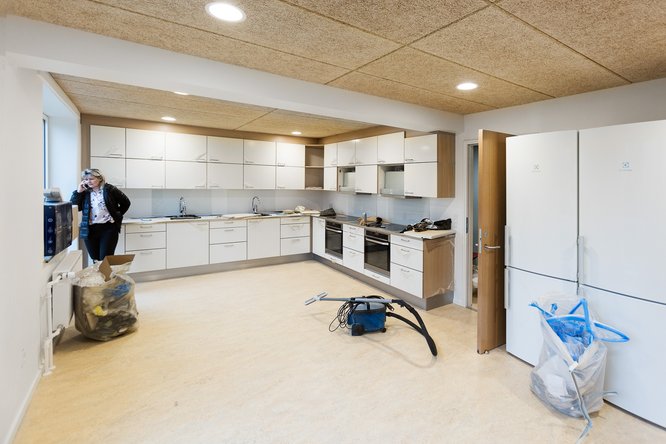 The workmen were still putting the finishing touches on the new communal kitchens when Omnibus stopped by. The 17 students who will live on the corridor will share four fridges and two cookers. New tables and chairs are also on the way. The tables can be stood on end to make room for a good kitchen party. There’s also room for a television. 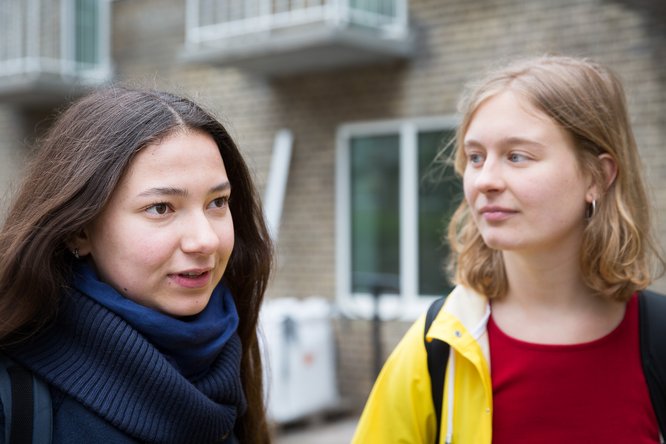 “I’ve only lived in the University Park residence halls for three months, but I’m planning on living here for the next six years while I study. And I’d like to have the comfort that comes with having your own bathroom. It’s also a nice feeling, being the first person to move into the new rooms.”

Nonetheless, she stresses that sharing a bathroom with the other residents worked just fine.

“The most important thing is that there’s still a communal kitchen,” she thinks.

Kirstine Marie Junge Pedersen has been living in the Wilhelm Kier Residence Hall in western Aarhus, where she also has her own bathroom. She’s looking forward to moving closer to the city and the university.

“And I know from experience that it’s easier to furnish an L-shaped room, which is what’s at Residence Hall 1 now, than a completely square room.”