Student and travel blogger: How to travel the world on SU

Tine Haslam Nielsen has been studying biology at AU for five and a half years. She’s also travelled for a total of 14 months and visited 17 countries in the same period. She stretches her tiny student income with painstakingly precise budgets, good planning and street food – all the way to the other side of the planet.

The list of places Tine Haslam Nielsen has visited during the five and a half years she’s also been studying biology full time is long.

“You know you travel a lot when you can’t remember all the places,” she laughs, adding that she’s also lived in Australia for six months and in Vietnam for three.

Both of these trips were exchanges which were part of her degree programme, which she’s nearly done with. Because she’s not only working on a Master’s degree in biology; she’s  a master at stretching her travel budget, even on an SU stipend.

“I prioritise being able to travel, so I save other places. It’s not like I live on bread and water, but I don’t spend that much money on going out and buying beers, for example,” she explains.

Twenty kroner her and there

It typically takes Tine nine to twelve months to save up for a longer trip, and to scrape the money together, she makes a budget for each month. Every month, she sets aside money for gifts and books she needs to buy over the course of the year so that unforeseen expenses don’t topple her budget. And every little thing counts.

READ MORE: Cure your wanderlust without breaking the bank

“A mobile phone subscription that’s 20 kroner cheaper doesn’t sound like much, but if you can save 20 kroner here and there, it adds up.”

She admits that her low rent – which only eats up 2,500 kroner of her SU every month – is a big help. This makes a difference on the red-hot property market in Aarhus, where many students she knows have to cough up 4,000 kroner a month.

She has also had a cleaning job for the past three and half years to supplement her SU by 1,500 kroner each month. 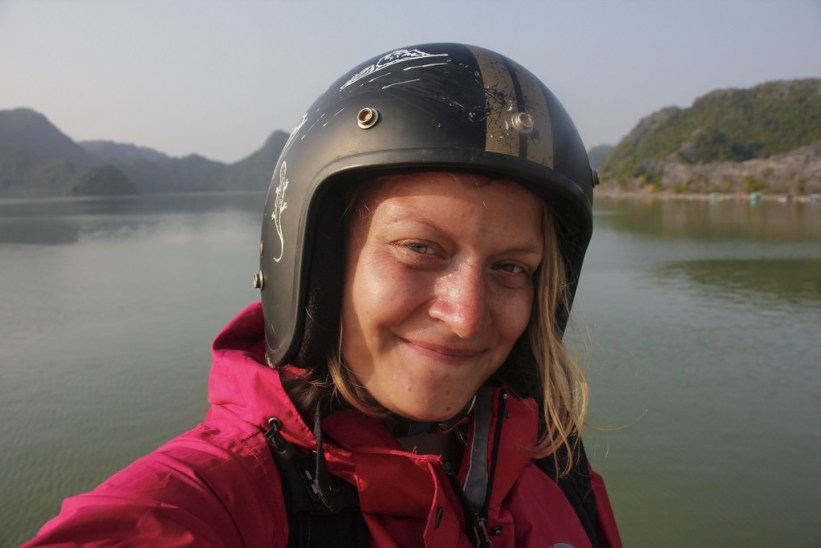 Scooter trip on Cat Ba Island in Vietnam. Travelling solo doesn’t mean you have to be lonely and alone all the time. On this trip, Tine Haslam Nielsen met two Brits who recognized her from a slow boat trip from Thailand to Laos, and she spent the rest of the day with them. Photo: A World of Backpacking.

Get in an extra vacation for the same price

One thing is saving up. It’s another thing entirely to spend your money wisely, and planning is key here too.

“Sometimes Kilroy has student plane tickets. You just have to have an international student ID card, which costs about 150 kroner, and I think I’ve saved two or three thousand kroner on some of my tickets that way.”

Taking a detour to a different country on the way to your final destination is another way to get cheaper tickets.

“When I went to Australia, it was cheaper for me to buy a ticket to Taipei on my flight out and then fly on to Australia from there. I stopped off at Bali and Singapore on my way home. I saved money on tickets both times and got 4-5 extra days of vacation all three places.”

You don’t just need a budget when you’re saving up for the trip. When Tine is travelling, she makes sure she’s made a budget for her daily expenses in advance.

“Sometimes keeping the prices down becomes like a game, so I actually spend less than my budget,” she says.

“A good tip is to plan your excursions yourself. Drop the guide, and take the local bus instead, so you also get a better impression of what daily life is like for the locals.”

“It’s cheap, and the food is often better than what you get at mid-price restaurants. And it’s also cool to talk to the locals or other travellers.”

And Tine is almost always positively surprised by her encounters with the locals.

“I typically go abroad for the big nature and animal experiences, but the locals often end up making the biggest impression on me anyway.”

When she was living in Vietnam om exchange, she was invited to eat dinner at the home of a local student’s mother every day for the last two months of her stay (an offer she didn’t have the heart to accept), and when she got food poisoning on Borneo, the hostel chauffeur drove her to the hospital and stayed with her all night.

“I didn’t realize that he wasn’t getting paid to stay with me until he said that he needed to leave because he had to go to work that morning. It’s really incredible to experience how much other people will do for a total stranger.” 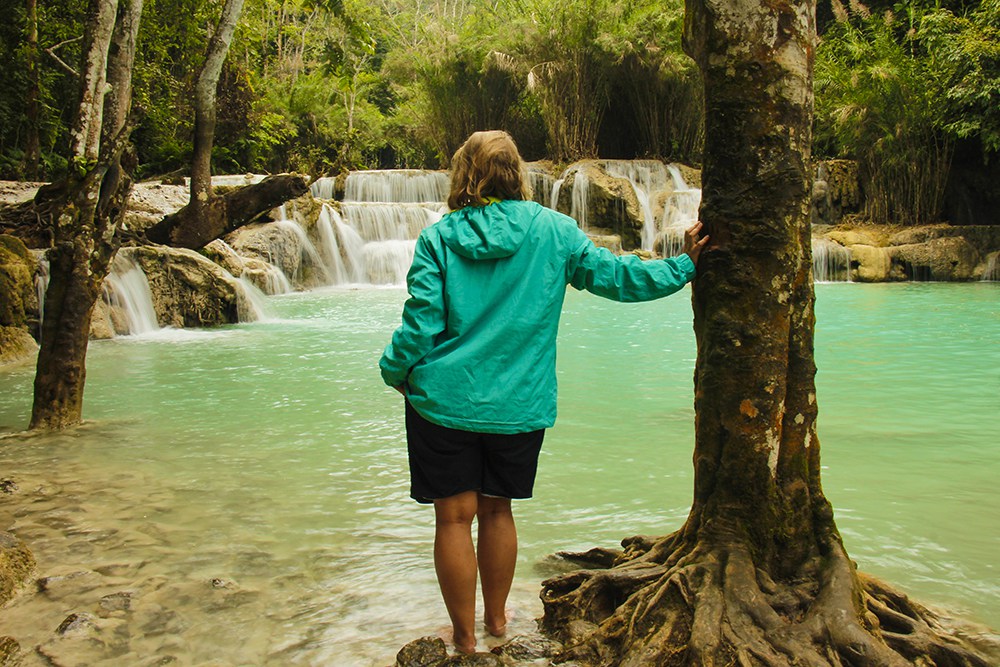 Tine Haslam Nielsen describes the Kuang Si falls in Laos as perhaps the most beautiful in Southeast Asia. She and some other backpackers rented a tuk tuk from their hostel. That saved them money and gave them access to a less crowded spot near the falls. Photo: A World of Backpacking.

A clean hostel is worth the extra money

You can also save money on accommodations, especially if you’re travelling alone and are willing to share a bedroom.

“I often stay at hostels, because if you’re travelling alone and you stay at a hotel, you often have to pay the same price as two people travelling together.”

Even though Tine is a student with a tight travel budget, she is willing to pay a little extra to sleep at a good hostel.

“A lot of people think that hostels are all alike, but if you pay a little extra, you can avoid the dirtiest ones.”

“There’s also a lot of life at hostels, and I like the social aspect. In Taipei there were five of us that got along so well that we ended up spending the five days I stayed at the hostel together.”

In December, Tine’s travel blog A World of Backpacking (in Danish) was voted Denmark’s next-best by the travel search agent Travelmarket (in Danish), and she herself thinks that her blog offers something you can’t get from many other blogs:

“I’ve chosen to focus on travelling alone because I could have used some advice and experiences before I went on a trip alone the first time.”

The questions many readers ask have to do with the fear of loneliness on the journey, or whether you need to be particularly careful when travelling alone. Even though Tine’s answer to the last question is a definite no, she does recommend that you always have the name of your hostel on you in writing when you’re travelling, so that you can easily grab a cab and be driven home if you get lost or feel unsafe.

“I also often ask at my hostels if there’s something you need to be aware of in the city I’m in if it’s a country with a bad reputation. There may be areas you should avoid, or maybe you should stay inside at night. And what’s more, I never get drunk when I’m travelling, so I can be sure that I can take care of myself,” she says. 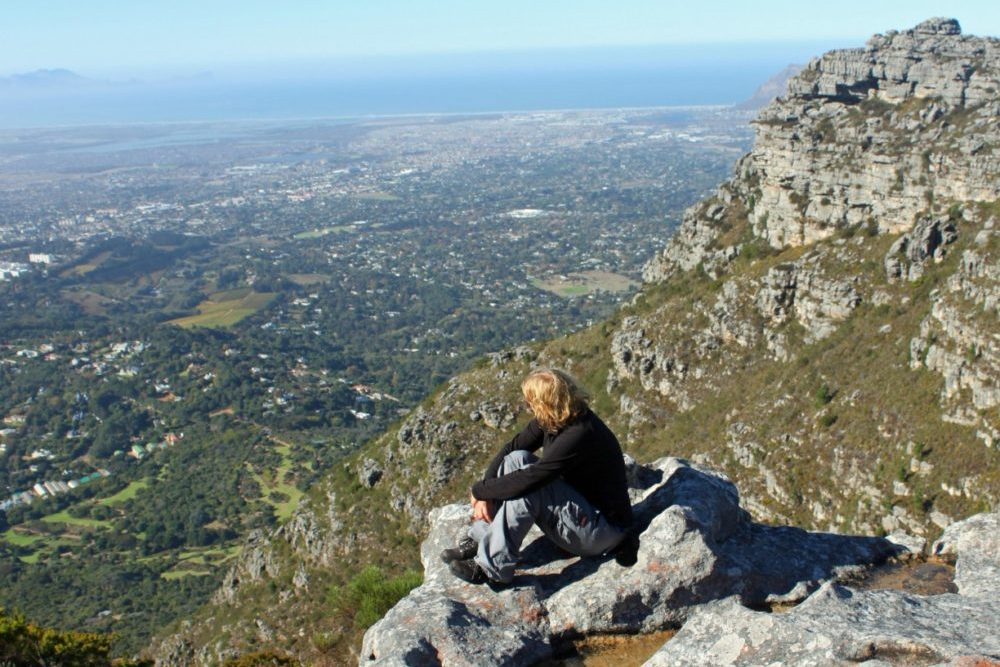 Table Mountain in Cape Town. The photo is from Tine Haslam Nielsen’s first solo trip. Photo: A World of Backpacking.

Dealing with loneliness isn’t quite so simple.

“I had to get used to spending so much time alone with myself, and to start with it was hard. But now I really value the peace and quiet, and it’s also an advantage not having to take what other people want to see into account, so I can make my plans based on what I want to do,” she says.

In relation to loneliness, people don’t really need good advice – more a confirmation that other people have felt the same way.

You’ll find both in Tine’s blog, which has been read by 5,700 people so far since January, and which celebrated its third anniversary on the 25th. Even though she’s proud of her second place on Travelmarket’s list, what really matters to Tine is the reader’s experience.

“Of course, recognition is always nice, but the most important thing to me is that readers can use my blog. I recently got a mail from a girl in her early 20s who wrote that my blog had inspired her to travel, and that it had changed her life. I never thought that a blog could do something like that, but hearing her story and what my blog had meant to her just made me so happy.”

Tine earns two or three hundred kroner a month off the blog for linking to the hostels she writes about, and in a few cases for sponsored posts.

After she defends her Master's thesis, Tine is certain that she’ll be packing her suitcase and taking off again.

“But for once I don’t know where I’m going. I’m leaning towards Central and South America, but I’ve applied for a research assistant job in the Maldives and I’ve applies for guide jobs in Australia and Vietnam. So we’ll have to see how things turn out.”