Two young astrophysicists started a company in a WW II barracks at AU, went viral and ended up on national television

Two astrophysics students working on their Master’s theses in a German WW II barracks at AU, some plastic to cover up the mould and a basement with storage room potential. This is more or less the recipe for the multimillion-kroner company Dialægt, which just won a competition to attract investors on national television and is now getting ready to go global.

They sell posters with witty sendups of different Danish dialects – but not because they’re graphic designers, linguists or urban hipsters. Far from it. Andreas Helbo Beck and Nikolaj Lykke Viborg, founders of the poster company Dialægt, er astrophysicists. And the reason they sell posters is because they needed something cheap to produce when they decided to start their own company while they were working on their Master’s thesis.

“People laughed at us, and people didn’t think we could live off it,” remembers Viborg.

But they’ve done very well nonetheless. In 2018, they had over 8.5 million kroner in sales. And in January, the two entrepreneurs were on the TV programme Løvens Hule (the lion’s den: show on which entrepreneurs pitch business cases in front of a panel of potential angel investors, red.). And succeeded in scoring two investors. The ‘lions’ Jesper Buch, founder of Just Eat and Miinto, and Jan Lehrmann, co-founder and CEO of Bilbasen.

Since Beck and Viborg’s television appearance, the phones have been ringing more than usual, because journalists want interviews, and customers want more posters. And so Viborg has to show us around the company without his partner.

He does so rather apologetically. On top of everything else, the company had to move the previous weekend because their former address in Katrinebjerg is going to be levelled by bulldozers any day now. Like their very first company address at AU, as a matter of fact.

In the not too distant past – 2015 – Beck and Viborg were working on their Master’s thesis in astrophysics at AU. But the thrill was gone:

“After five years of studying, all the romance had been peeled off the university, you might say. And Andreas and I stood out because the degree programme was no longer our first priority,” Viborg remembers.

They got called ‘the old married couple’, wrote reports together and surfed Google for information about entrepreneurship when the lectures got too abstruse, Viborg says.

And when it was time to write the Master’s thesis, the two of them joined forces as usual. The student office they were given was close to Langelandsgade, in AU’s old barracks. It had been built by the Germans during the occupation, who used it as a brothel if the rumors are true.

After the war, AU used the buildings for student offices, reading rooms and the molecular biology students’ Friday bar. But it’s since been literally wiped off the map.

“Let me just say that I understand why they tore it down,” says Viborg, with characteristic Jutlandish understatement.

The two budding entrepreneurs started developing ideas. First a bike lock with a built-in GPS and then an app with information about deals on drinks in town. But the prototype of the app alone would cost half a million kroner, and ‘the old married couple’ only had their SU as start capital.

So what costs next to nothing and takes almost nothing to make? Posters.

But posters of what? Well... They’d had a lot of laughs about the local dialect and expressions from their respective home regions, West Jutland and Aarhus, so maybe other people would too?

They tried it out. 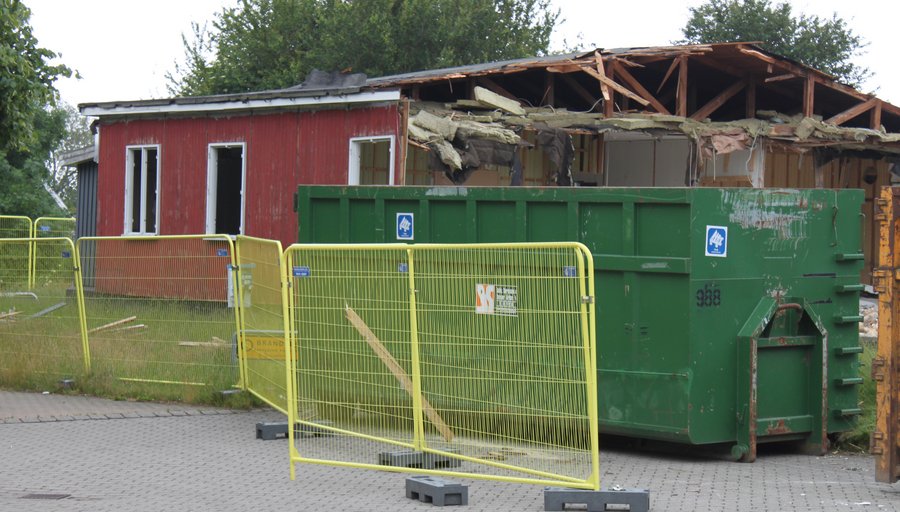 In 2015, Andreas Helbo Beck and Nikolaj Lykke Viborg’s company Dialægt was headquartered in the old barracks owned by AU. The barracks was built by the Germans during the Occupation, and was torn down in 2017, the year the photo was taken. Archival photo: AU University History

11 kilometers of plastic wrap down a spiral staircase

Beck and Viborg established the headquarter of their new poster company Dialægt in the barracks.

Not only did the location offer them office space, there was also storage space in the cellar. If you’re the optimistic type who doesn’t see mouldy walls as a obstacle.

“It looked totally abandoned, and it was super dirty. But we just hung some plastic on the wall where there was mould,” Viborg says.

The postal service also had some trouble finding it, but the delivery man could always just call and ask for directions. Because they ordered poster tubes, packaging and whatever else by the pallet.

“We soon found out that if we wanted to keep our costs and prices down, we had to place some seriously big orders. For example, Andreas ordered 11 kilometers of plastic wrap to save 300 kroner on freight. We still haven’t used it up,” Viborg laughs.

The deliveries came in through doors or windows and were carried down a narrow spiral staircase to the basement. The two entrepreneurs didn’t worry too much about the fact that this was AU property:

“Well, it wasn’t being used, and I guess we were working under the philosophy ‘It’s easier to ask for forgiveness than permission’.”

And even though their fellow students could see and hear a certain amount of business-related activity in the barracks, Beck and Viborg never heard a word about their alternative use of their student office.

It was a different story entirely with the posters, which got a lot of response online. 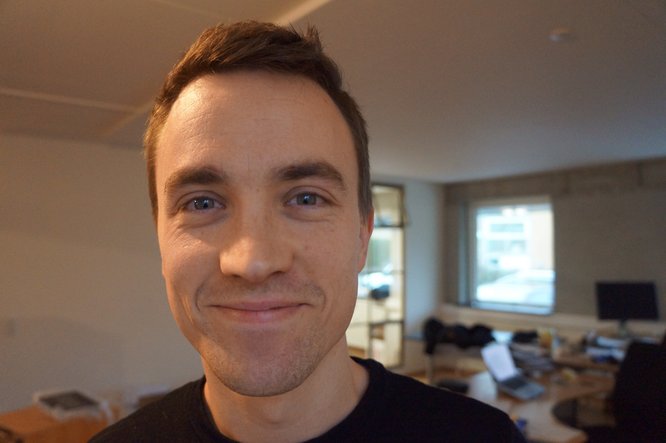 Nikolaj Lykke Viborg giving a tour of Dialægt’s new space in Åbyhøj. The first company address was in an old barracks at AU where the two entrepreneurs wrote their Master’s thesis. Photo: Lene Ravn

To begin with, the entrepreneurs produced two posters. One for Aarhus natives like Beck, who says ‘sårt’ and ‘skjårt’ instead of ‘sort’ ([ˈsoɐ̯d], black) and ‘skjorte’ ([ˈsgjoɐ̯də], shirt). And a different one for phlegmatically unintelligible West Jutland natives like Viborg, who react to tragedy by saying things  like ’Det ku’ da ha’ wæt møj wærre’ (‘It could have been a lot worse’, in standard Danish‘Det kunne da have været meget værre’, ed).

Six weeks after the posters went on sale, photos of them went viral online. It was in the middle of the Christmas shopping season, and before long they had earned 50,000 kroner.

The entrepreneurs had to act fast:

“Our earnings could mean that we might lose our SU. We didn’t want that to happen. So each of us withdrew 25,000 kroner from the company and used the 50,000 to start a private limited company (ApS, ed.).”

And their SU was safe. 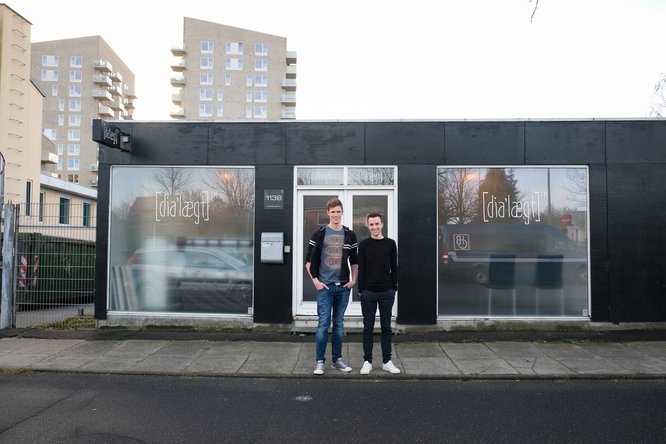 In 2015, the company Dialægt started with two printed posters: one with the dialect from Andreas Helbo Beck’s hometown Aarhus, and one with expressions from West Jutland, where Nikolaj Lykke Viborg comes from. Today, the selection is much larger, and there are poster for ‘the mom’, ‘the accountant’, the ‘preschool teacher’ and ‘the soccer player’. Press photo: Sebastian Kjær, TechSavvy Media

Contacted by a caster from national television

After the two entrepreneurs completed their Master's theses, they kept on growing their business, and in 2018, they were contacted by a caster from the entrepreneurship program ‘The Lion’s Den’ in 2018 at a trade show.

They had watched the show in their Master’s thesis-writing days in the barracks – always followed by a debate on whether the panel of angel investor-lions had fallen for the right investors.

And now the caster for the very same program was standing in front of them, encouraging them to be on the show.

“But we told her that we didn’t need the money,” Viborg says.

Business was great, and they had reached 8,500,000 kroner in sales that year. But after thinking it over for awhile, they changed their minds and applied.

“It could be a springboard to moving forward with the business abroad, learning something and good PR as well.”

So they were thrown to the lions in November 2018.

The experience didn’t turn out exactly as they’d expected.

“It’s weird to come into this studio you’ve seen on TV. The stage only filled a corner of the studio. The walls were made of cardboard with painted-on bricks, and the rest was styrofoam and plaster. The door was just cardboard too,” Nikolaj remembers:

The dialogue with the potential investors was straightforward for the two entrepreneurs, and Dialægt walked out with two investors on board – Jan Lehrmann and Jesper Buch, each of whom offered 600,000 kroner for a ten-percent share of the company.

“Then we had to walk out the cardboard door again, but we weren’t allowed to say anything. Because that was when they filmed the lions’ reaction. When they were done with that, we had to walk out of a different door they’d made, cheering and high-fiving. It was kind of staged – and you can probably see that on TV,” Viborg comments. 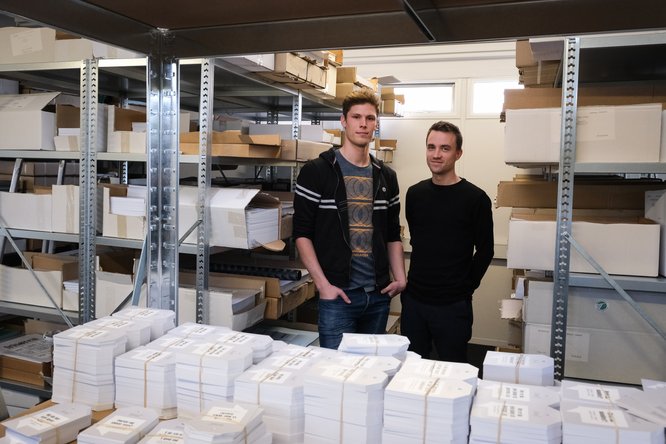 Dialægt has never been affiliated with the Aarhus Student Incubator. “We never heard anything about it. I actually still don’t know what it is,” Viborg says, shrugging his shoulders. Presse photo: Sebastian Kjær, TechSavvy Media

Written in the stars?

They haven’t for a moment regretted going on ‘The Lion’s Den’. The two new investors are already opening doors for Dialægt through their networks. But they aren’t quite sure what do to with the capital that came with their business angels.

“We’d just like to get some smart people in the business,” Viborg says, adding that the money will definitely get spent when Dialægt makes it debut on the Norwegian market among others.

Because the story doesn’t end here for the two entrepreneurs, and Viborg’s mantra is that a university degree can be used in a lot more ways than you might expect.

He says he uses astrophysics every day. And just because you’re an astrophysicist, it’s not written in the stars that you’ll end up working with research or research dissemination.

“At the university, you learn to assimilate difficult material quickly – that’s something you can use a lot of places. I’d like to strike a blow for taking a closer look at the tools you acquire during your studies.” 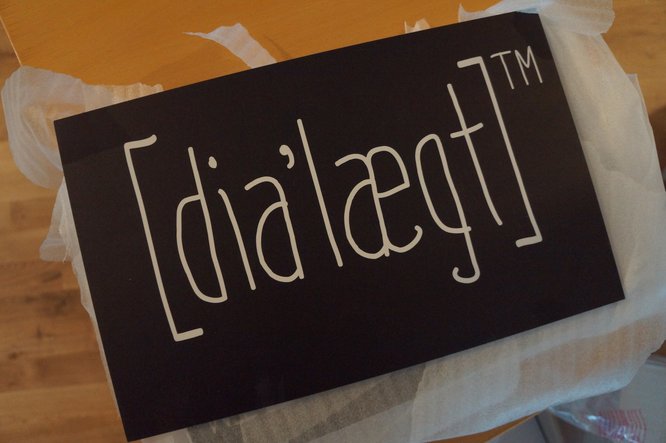