A walk on the wild side in the University Park

AU’s biologists have been pushing for more untamed nature into the University Park for a long time. And now a little strip of wildflowers is blooming away, to the delight of hoverflies and biology students alike. But AU needs to do even more, the biologists say.

Since 2017, Anders Sanchez Barfod, associate professor of ecoinformatics and biodiversity, has been fighting for permission to sow native plants outside the classroom where he teaches students plant identification at the Department of Bioscience.

READ MORE: Hey! What about that meadow in the University Park?

Now he’s standing in front of a modest little bed full of wildflowers he sowed with a group of student volunteers and employees from the Department of Bioscience. 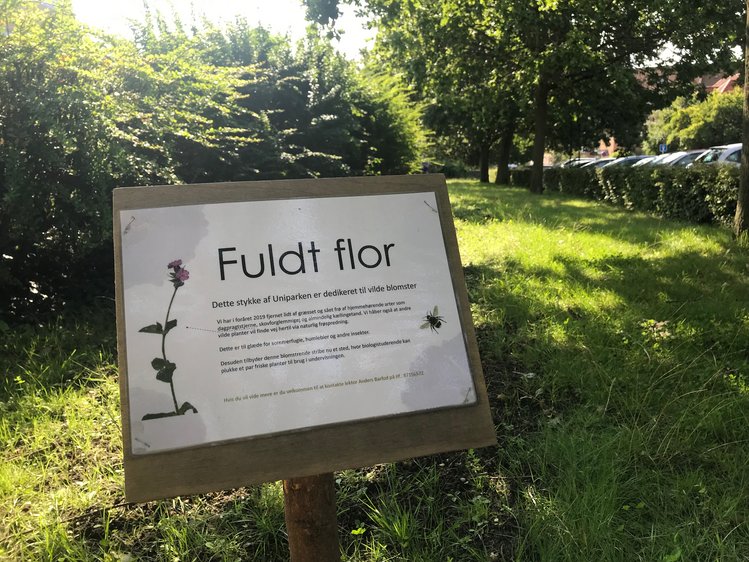 Wilderness areas require virtually no maintenance once they’re established. “It’s only necessary to mow these areas with a scythe once a year, so they don’t get taken over by nettles,” explains Associate Professor Anders Sanchez Barfod, who envisions a voluntary ‘mowing guild’ of students and employees handling that job. “It would create a sense of community and co-ownership – and then of course you just could pop open a beer afterwards.” Photo: Marie Groth Andersen

“We’ve been allocated a little piece of land near Ny Munkegade that – admittedly – isn’t that impressive. Because we didn’t get access to it until early summer, and we had to sow it during dry weather, which isn’t optimal. Next year we expect that it will look a lot more impressive,” says Barfod, who’s happy that a little piece of wild nature has finally been allowed to sprout on AU’s main Aarhus campus.

A (yellow) wall of opposition

“It’s been a long, tough haul,” he continues.

And he’s not referring to the digging and hoeing. The really tough part was convincing the management at AU’s Construction and Planning office that it was a good idea to plant native plants in the University Park. 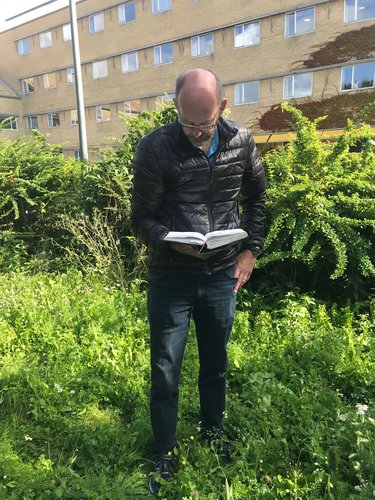 Wild spots in the University Park

Also check out the Facebook group: Natur i Uniparken Aarhus. Nature enthusiasts (particularly from the Dept. of Bioscience) post photos of the animals and plants you can have the good luck to meet in the University Park. The heron is a frequent guest here. Sparrowhawks, redstarts and cardinal beetles also swing by.

Their opposition is at at least partially founded in the so-called testament drawn up by the architect C.F. Møller, the designer of AU’s iconic yellow brick buildings. A testament that dictates for posterity how Møller wanted the park and its buildings to look and to be maintained.

Here’s an example of the kinds of strictures Møller included in the testament:

“In addition to the bushes that protect sidewalks, banks and squares, the only plants present where these considerations are not relevant should be oak trees. Ornamental shrubs, flowers, beds, bulbs in the lawns and such like are not to be permitted, and the reeds around the banks of the lakes should be kept down.”

But as Barfod sees it, the idea that deviating from C.F. Møller’s plan for the park is out of the question is out of step with reality.

“Of course we should be able to deviate from an architect’s thinking from the 30s. If not, then we risk getting completely out of step with the development of society, which is moving in a completely different direction.”

Over the past six months, the climate debate has put in wind in the sails of the AU biologist’s vision of a wilder unipark, and AU is now willing to cede a tiny corner of the manicured green lawn to the anarchy of nature. In addition to the bed near Ny Munkegade, the university is allowing a section of the bank of the stream behind the Lakeside Lecture Theatres to grow wild next year in the name of biodiversity. 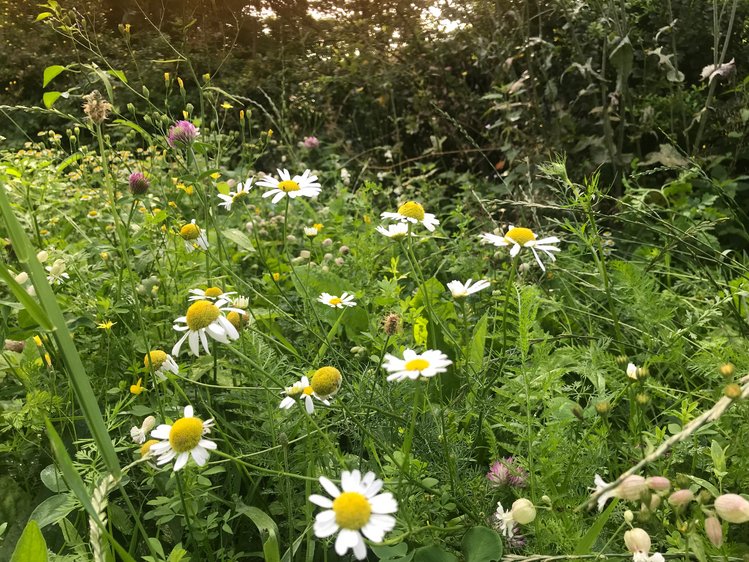 Even though the small bed by Ny Munkegade doesn’t look impressive from a distance, it’s already home to a variety of different plants, including red clover, wild carrot, wild chamomile, feverfew and wild basil. And it attracts insects and butterflies, including the lovely common blue, the admiral and the common brimstone. Photo: Marie Groth Andersen

READ MORE: Should ‘saving our own butts’ be the only goal of AU’s coming sustainability strategy?

Peter Bachmann Vestergaard, head of building services, explains the change in attitude in the following way:

“We have an obligation to keep up with the times and social tendencies rather than remaining at a standstill. If we have areas that we can bring into play in a controlled way and to an extent that we don’t lose the historical foundation, then let’s talk about it.”

Room for lawns and wilderness

Although as a biologist, Barfod can’t get enough untamed nature in principle, his vision is not to allow all the grass in the University Park to grow wild. Less drastic measures will do.

“There are lots of places in the park outside the large lawn where you could easily establish beds of wildflowers. And I don’t mean traditional flowerbeds as such, of course, but areas where wild plants are allowed to reign. They attract insects and other kinds of animal life, as well as birds and hedgehogs.” 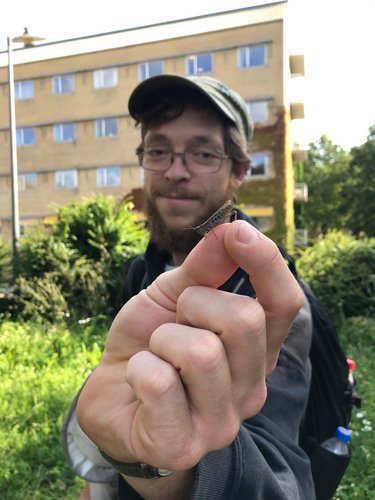 Bang! Biology student Sean Birk Bek Craig shows up in full fieldwork costume with a butterfly net under one arm. And he starts swatting away with the net, and catches a hoverfly, a dronefly and a grasshopper. Photo: Marie Groth Andersen

In step with the UN’s sustainable development goals

Barfod is glad that a space for dialog about increasing biodiversity in the park has opened up.

“As a university, we have a special obligation to lead the way in efforts to promote biodiversity. And this is also completely in step with the UN’s sustainable development goals."

And Barfod is also looking forward to using the wildflower area by Ny Munkegade when he teaches plant identification.

And the biology students themselves are psyched about having a plot of wilderness to study – and not least enjoy. 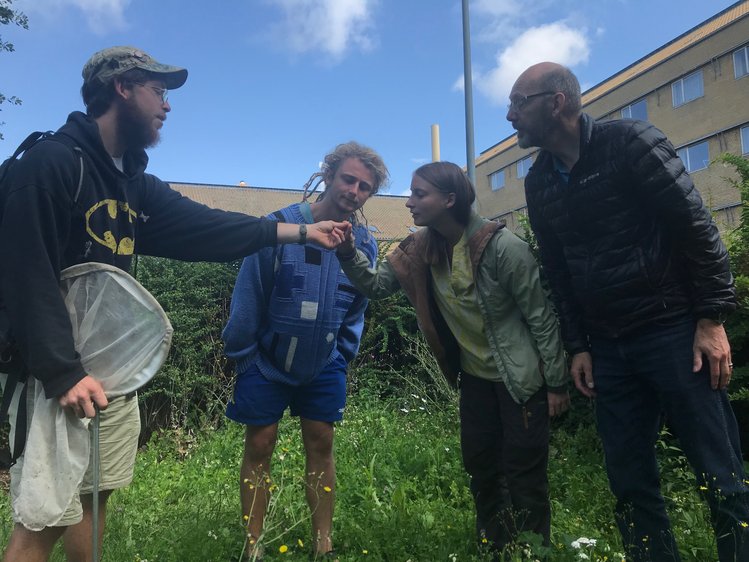 All forms of life are welcome at AU’s wild spot by Ny Munkegade: insects, birds, hedgehogs – and students and employees. And yes, go ahead and plop down on a blanket, even though you might smash the wildflowers. “That just changes the competitive relationships between the species a little. And that’s just fine,” the biology students assure me. Photo: Marie Groth Andersen

“It’s cool that you can just go outside in your breaks and look at nature – and not just a lawn and oak trees. You’re surprised every time. Because every time what you see is different,” says Sofie Amund Kjeldgaard, a first-semester biology MSc student.

Sean Birk Bek Craig, who’s in the fifth semester of his BSc in biology, agrees:

“Yeah – after all, no one ever gets tired of seeing a common blue [butterfly, ed.]. And nature is restorative, and gives us perspective on the world. Once you’ve started looking at life, you get the habit, and you have to have more.”

If you’d like to do something to increase the biodiversity of your own garden, Associate Professor Anders Sanchez Barfod recommends one of two methods:

1)    Dig up a section of your law and sow a meadow seed mix. The result will look great in the first year. The next year, som species might dominate at the expense of others.

2)    Let your lawn grow wild. The result won’t be quite as spectacular the first year, but in subsequent years, natural succession in bloom times will ensure that the bed is beautiful all summer long.

In both scenarios, the bed should be mown with a scythe once a year.

Wild spots in the University Park

Also check out the Facebook group: Natur i Uniparken Aarhus. Nature enthusiasts (particularly from the Dept. of Bioscience) post photos of the animals and plants you can have the good luck to meet in the University Park. The heron is a frequent guest here. Sparrowhawks, redstarts and cardinal beetles also swing by.