Show me your office – Dirk Leonhardt

Thirty years have passed since Dirk Leonhardt came to Denmark from Germany to work as a technician at the central laboratory at what was then the Department of Dentistry and Oral Health. Though he is now head of the laboratory, he has still not entirely let go of the craftsmanship involved in making dental crowns, bridges, prostheses and implants. And he also has the code to a safe that could get a safecracker like Egon Olsen (from the famous Danish Olsen Banden films, ed.) to come up with a plan.

"It's the best workplace you can imagine,” says Dirk Leonhardt promptly after telling that he has a thirty-year anniversary this year at the central laboratory in what was back when he started the Aarhus School of Dentistry and the School for Dental Assistants, Hygienists and Clinical Technicians, and is now part of the Department of Dentistry and Oral Health. When he was hired back then, his boss at the time said he would not be surprised to see Dirk one day became head of the laboratory – and that is what happened.

"It’s a great environment with both research and teaching. I’m given challenges that you wouldn't get in the private sector, and I have close contact with students, dentists and researchers," he explains.

As chief technician, he has a small office at the very back of the central laboratory, that but for the window and glass door, could be mistaken for a broom cupboard. 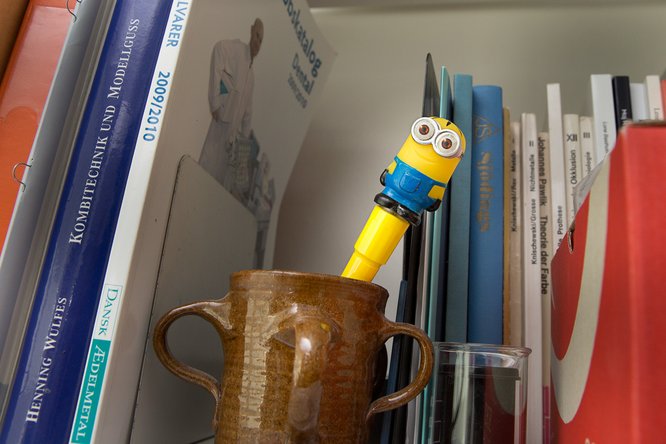 "My office work doesn’t involve more than a desk, chair, computer and some shelves for books and folders. It's administrative work. Here I can do the work plans, talk fairly undisturbed with manufacturers and prepare invoices for private dentists." 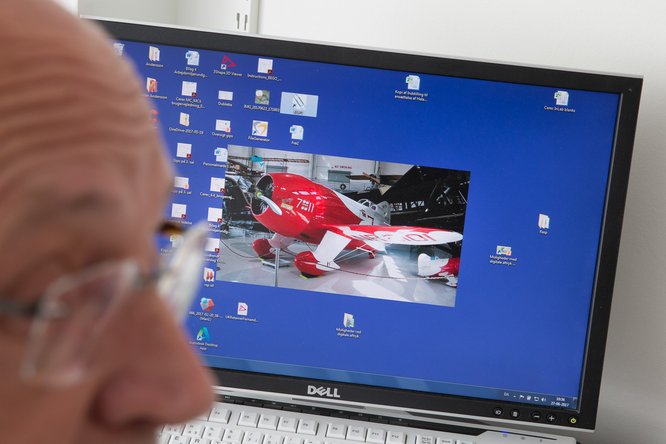 "This is my hobby," he says, pointing at the background image on his computer. It is of a smart red and white aircraft, model GeeBee R2.

“No! But I wish it was. I’m building a model of it. There’s only one aircraft of this type. It’s from the golden age of aviation and was built for pylon racing (as the name suggests, racing where aircraft are flown between pylons, ed.), and it was really good at it. They got the biggest motor they could find and built an aircraft around it."

Leonhardt gets ready to leave the office, as in his opinion, the most interesting place to be is out in the laboratory.

"But before we go, you must see the safe. I’m guarding all the gold."

He turns the combination lock and opens the heavy red door. 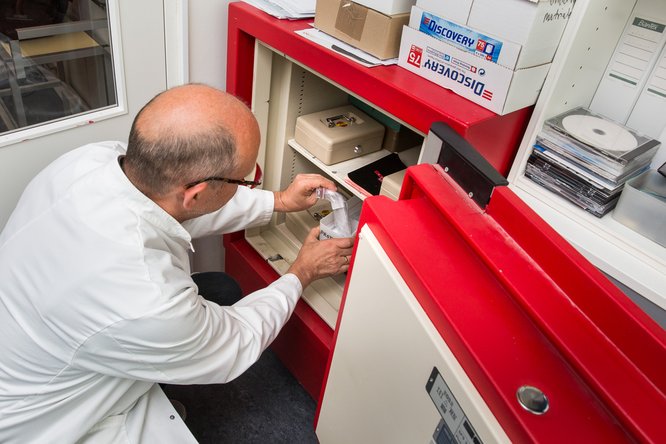 "The gold in here is worth several hundred thousand Danish kroner. It’s 18 carat solid gold, which we use for gold dental crowns when they really need to last."

Leonhardt opens his mouth and reveals a set of teeth with several gold fillings.

"They’ve lasted forty years. Gold is unquestionably the best material. The gold standard," according to the chief technician. He also adds that there is continuous control of the amount of gold in the safe compared to the consumption in the clinic and laboratory.

But gold is not to everyone's taste. Many people choose the ceramic dental crowns instead as they blend in better, he says. 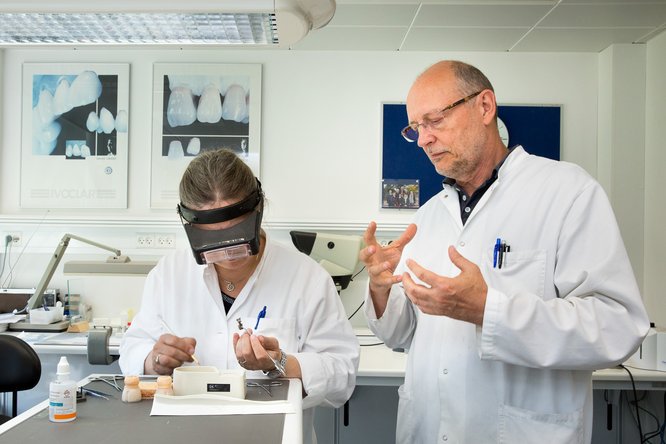 "That’s real craftsmanship!" he says with reference to the fact that much of the work of dental technicians has been digitalised in recent years.

This development that is also reflected in the machinery. The laboratory contains both new, advanced equipment and machines that have been around for many years. Leonhardt puts his hand on a big grey machine belonging to the latter category.

"This can melt polycarbonate. We normally work in acrylates, but some patients have allergic reactions to acrylic, so then we make prostheses in polycarbonate instead. It’s the only machine of its kind left in the world, and we only have this remaining stock of the material."

He fetches a plastic bucket containing pink plastic sprinkles that look like something you would put on top of an ice cream. 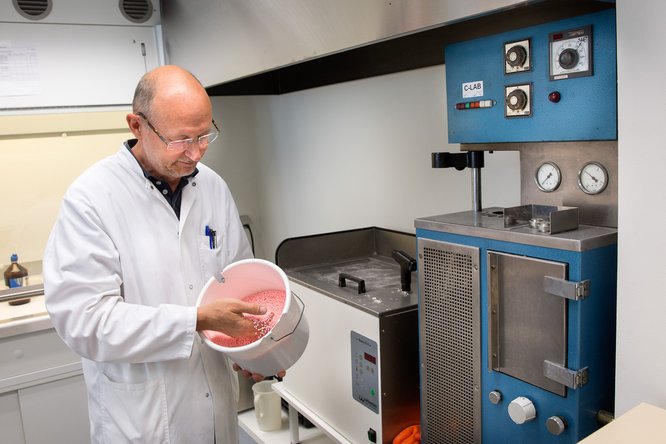 "There’s enough for around a hundred prostheses here, and then it’s gone. But the material is difficult to work with and you can't repair it, so it’s time is up. This portion should last until we have a new allergy-friendly – and probably digital – alternative within a few years," he says.

He turns on a computer to show an example of how digitisation with advanced software and 3D printers has changed the work of dental technicians. The patient has his or her teeth scanned at their own dentist, who then sends the scanned images to the central laboratory. Here, Leonhardt and his colleagues can spend 90 minutes carrying out work that would have previously taken several days and which would have also involved casts and modelling in wax. 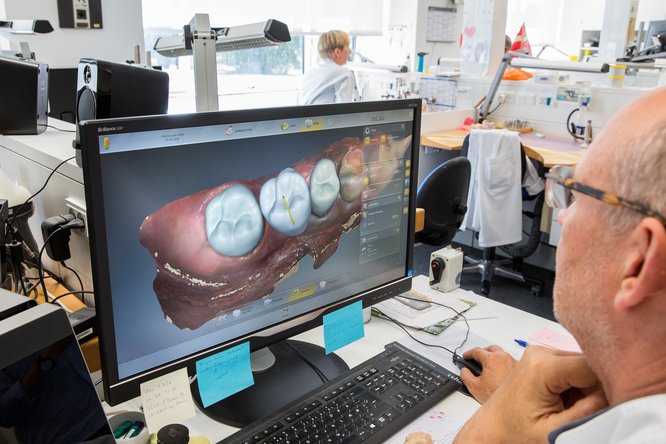 "We just need to do the final finish by hand."

He is fine with some of the craftsmanship that had previously been part of his craft being taken over by computers.

"Our quality control of the product is significantly better. We can achieve a level of precision and quality of material that you can’t create with your hands."

To illustrate his point, Leonhardt picks up a chess piece printed on a 3D printer. In addition to detailed brick markings on the outside, it has a twisted spiral staircase inside the piece itself. 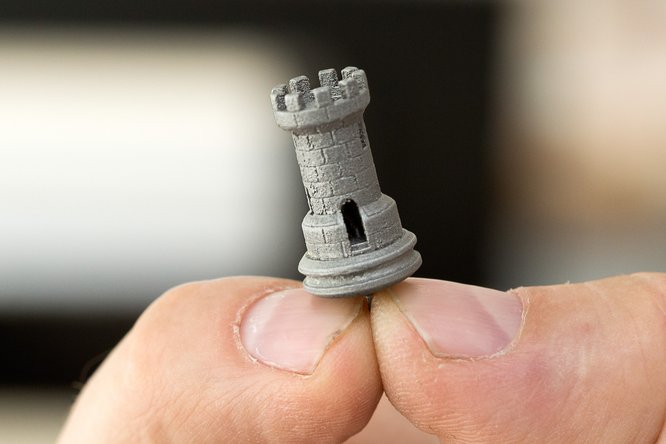 "You simply can’t cast that," says the chief technician, who is quite excited about the possibilities that digitisation offers. He also collaborates with software and hardware manufacturers on the development of the technology.

But despite his enthusiasm, he is not blind to the consequences of this development.

"It costs people," he says, not just referring to the laboratory at AU but to the industry in general.

However, there is no prospect of digitisation taking over completely in the immediate future, he says.

"If you take a full-scale prosthesis as an example, it still involves a lot of manual work because there are so many steps involved, and that can’t be done digitally yet." 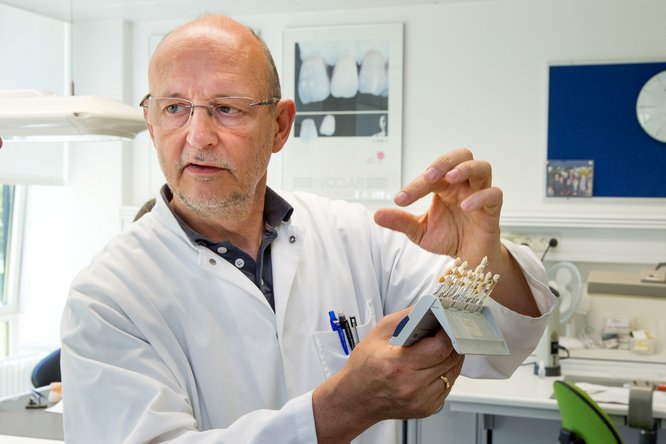