A career as a laboratory mouse or rat is short and ends abruptly in a yellow bucket labelled 'hazardous waste'. But before they get to that point, the mice and rats can be fortunate enough to be looked after by Lene Hornbæk Holm. As an animal technician at Aarhus University, she is responsible for thousands of mice and rats.

It is eight in the morning and Lene Hornbæk Holm has already been working for an hour and a half.

Why do you start work so early?

"It's nice to get her early and take care of all the practical stuff before the researchers start visiting the animal facilities," she explains.

The animal facilities she is referring to are a corridor on the fifth floor under the roof of the Department of Biomedicine on Ole Worms Allé. Behind the wooden doors are cabinets full of small plastic cages with a handful of mice in each. 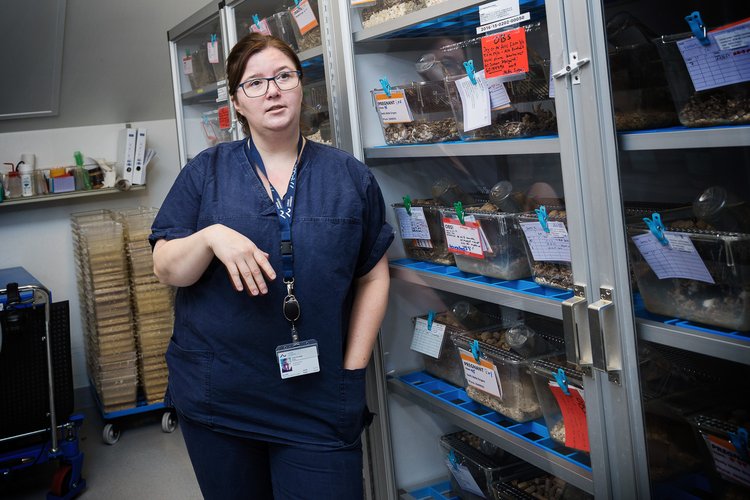 On her morning round, Holm checks to see if any animals have been born during the night. There are also around a hundred cages that need cleaning, which is done in what looks like an industrial washing machine. But first, the bedding must be knocked out into a waste bin. 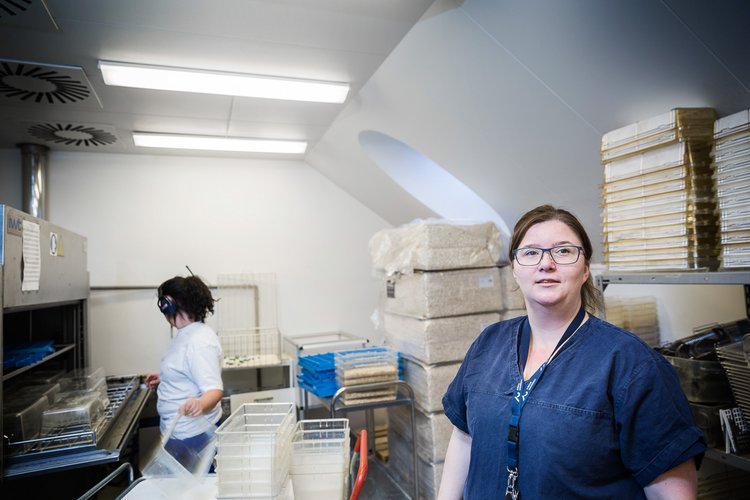 "It's not really hard in itself, but after you repeat the same movement hundreds of times in succession, you begin to feel it.”

Holm nods her head towards the waste bin.

"The waste has to be carried down from the fifth floor, and deliveries of bags of feed and animal bedding have to be taken in the other direction. Fortunately, there is a lift that just about has room for a pallet. But there isn’t one over in the animal facilities at Bartholins Allé. There we have to grab all the sacks and drag them in and up to the facilities."

However, there is the prospect of a much of the heavy lifting ending in September next year. This is when the Department of Biomedicine's new Skou Building will be finished and will offer modern laboratory animal facilities. Which will in turn improve the work environment for the animal technicians in several areas. And for the researchers too, according to Holm: 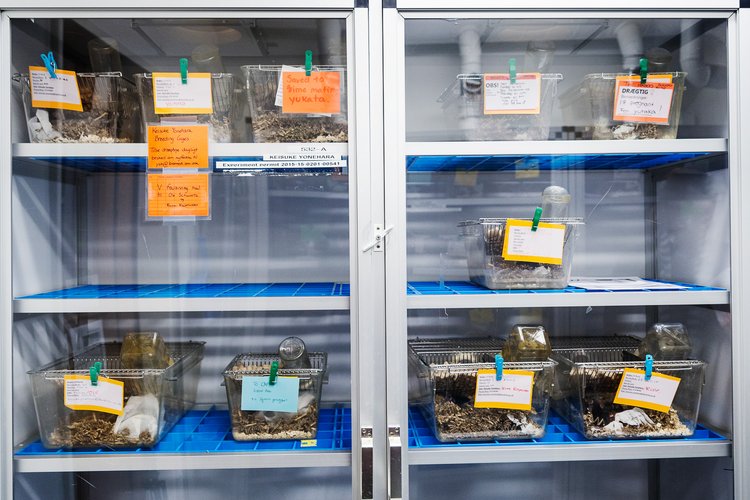 The new animal facilities will have exhaust ventilation in each individual cage as well as better access to the facilities.

Holm primarily looks after mice and rats that are used in various animal experiments by researchers at the Department of Biomedicine, where a career as a laboratory mouse is short.

"Some mice don’t even get to be born, for example if the researchers need to perform experiments on mice foetuses. Others live to be two or three years old before their career as laboratory mice comes to an end. But normally their lifespan is between six and fourteen weeks." 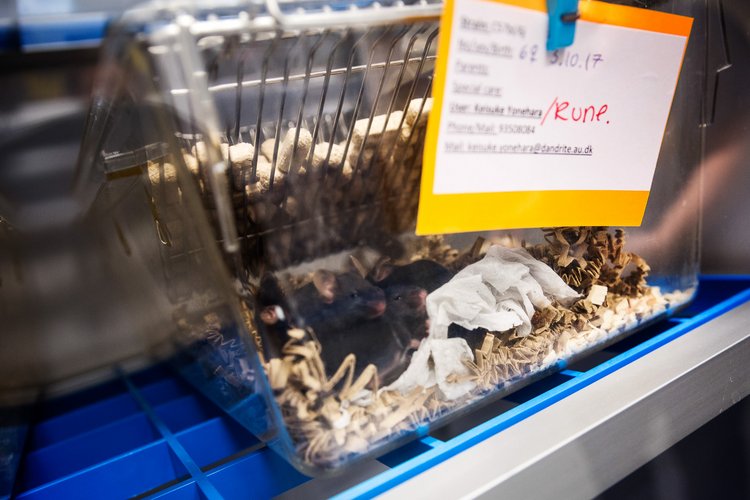 In other words, the job of a laboratory mouse is not one they survive. Often Holm and her colleagues are the ones to give the final injection.

"We do that every day. It’s not the most fun job in the world. We are animal technicians because we love animals and want to do what we can for the animals. When I have to put down small, cute baby mice or rats, I have to leave my feelings out of it. Otherwise I’ll feel sad."

But that is also as far as things go in terms of sentimentality.

"The animals have a purpose while they’re here. Working with animals that will be used for animal experiments doesn’t bother me. I help to make sure that they have as good a life as possible while they’re here. A lot of people think it’s kind of a strange job, but I don’t have any problems defending it." 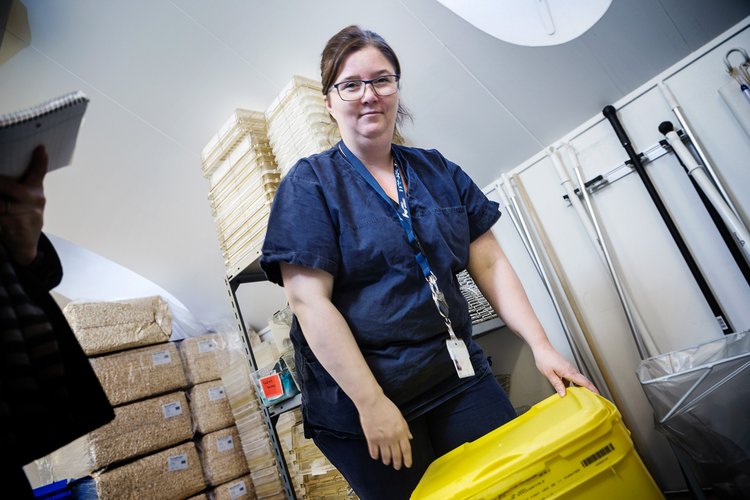 Lene Hornbæk Holm with the yellow bucket - the graveyard of the laboratory mice and rats. They are considered hazardous waste because they can have been genetically modified or infected during the experiments.

She began as a trainee animal technician at the Department of Clinical Medicine in 2001, before moving to a privately-owned breeding company and then finally being employed at the university in 2010.

Why did you want to be an animal technician?

"I got the idea during the four months I spent on a kibbutz in Israel when I was twenty. Here I looked after the cows. Going out and petting the animals, milking them and talking to them, I thought that was the best thing in the world, so the plan was actually to become an animal technician within the agricultural sector."

But you ended up at AU. Why is that?

"It was a bit by chance because I got a trainee place at the university. The work here is completely different to the agricultural sector. But it’s really good and I'm happy with my work and my colleagues. We’re all mad about animals. For some it’s cats, for me it’s my German Shepard Kyrmpe, who is also my biggest leisure interest." 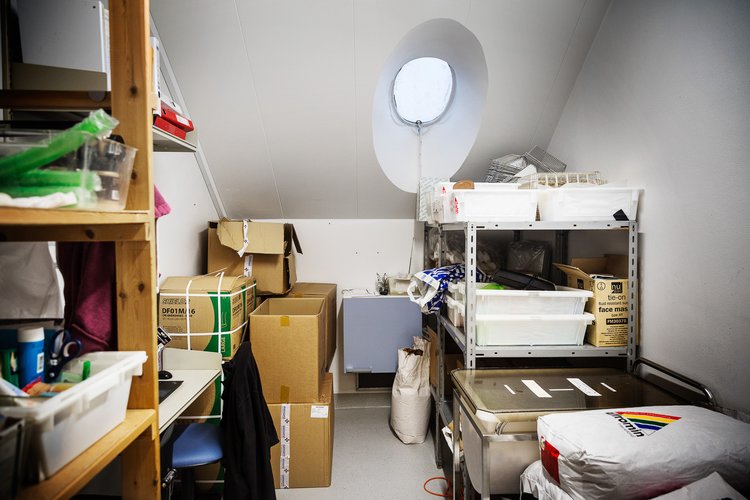 The animal technicians do not have an office as such, but they have a computer in the storeroom that they use during breaks.

"Then we sit here. One of us on the office chair and another on the sacks of feed," laughs Holm. 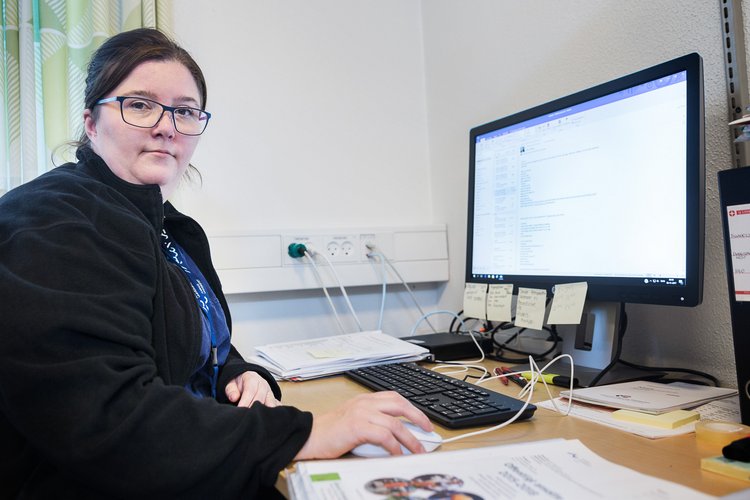 Holm is one of two union representatives for the animal technicians at AU. She therefore has a work station in an office on the ground floor that she shares with a handful of students and another employee.

"I've been a union representative for two years and it’s really, really exciting. Especially right now, where we’re busy merging departments here at Biomedicine. I’ve always had a sense of professional pride and been pleased with my profession, and that’s certainly not changed after I was elected as union representative."