Show me your office – Dorte Laustsen

Dorte Laustsen has a been a labware cleaning assistant at AU for over 20 years. She makes sure that the glass beakers and flasks used in the labs in the Bartholin Building at the Department of Biomedicine are squeaky clean – a process which can take up to three days.

Every morning at about 5:30 am, Dorte Laustsen makes the rounds of the labs in the Bartholin Building at the Department of Biomedicine in the University Park in Aarhus to pick up trolleys filled with metal buckets. 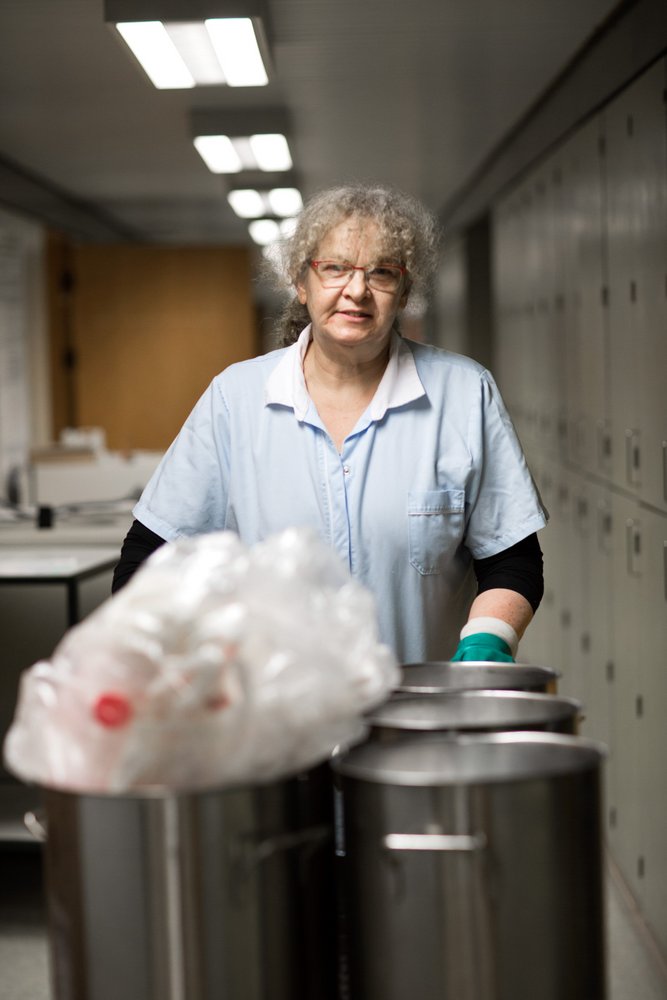 The buckets are full of waste and used glassware from the labs. Sometimes the buckets have already had a dip in the autoclave – a machine which sterilises lab waste and lab equipment at high pressure and a temperature of 121 degrees Celsius. In these cases, Dorte simply empties the waste directly into the dustbin and gets started on washing the glassware. Otherwise she has to autoclave the buckets herself to make sure their contents are no longer a health hazard. 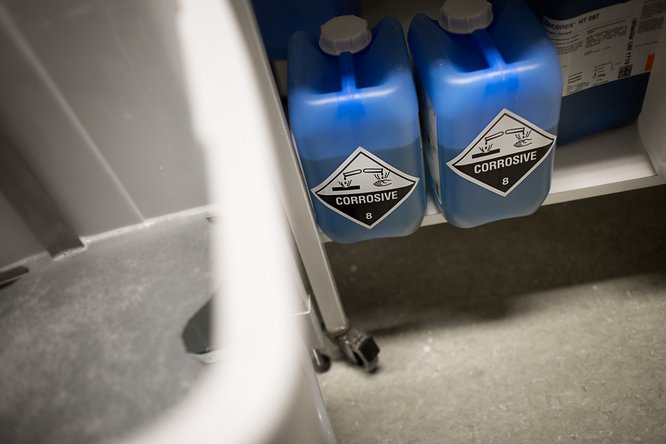 Dorte removes glassware from some large grey containers where the flasks and beakers have been soaking overnight in a cleaning solution that doesn’t look like something you’d want to put your bare hands into. In any case, ‘CORROSIVE’ is written on the packaging in big letters.

She opens the lid of one of the buckets on the trolley just slightly.

“Sometimes what we find in the buckets stinks something awful. You can’t have a weak stomach. But this isn’t too bad,” she says, emptying pink liquid out of some large flasks into the sink. 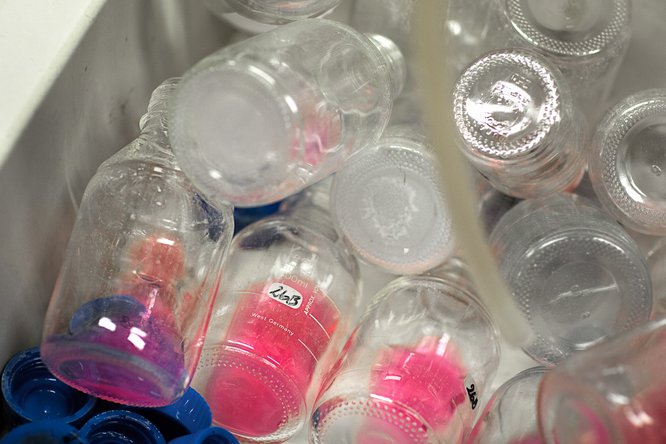 What’s the nastiest thing you’ve had to deal with?

“Well, that’s a little hard to say...Oh yes. We used to wash the glassware from the dentistry courses, which we don’t do any more. The buckets were filled with test tubes, and the gunk that was in them could smell really disgusting.”

What’s the busiest time of day for you?

“It comes in waves. But there’s definitely a lot to do in the morning, when we empty the trolleys. And then again when the autoclaves are done. It’s really up and down over a workday.” 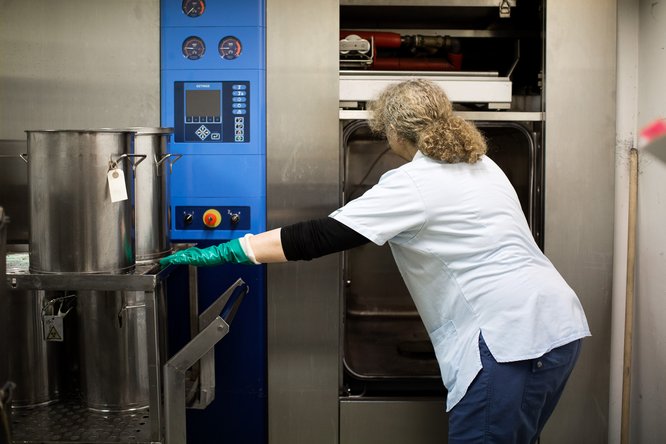 Dorthe has been working as a labware cleaning assistant at Aarhus University since 1997.

“You don’t need any particular educational background except a fourteen-day course, which qualifies you call yourself ‘sterile assistant’.

‘Sterile assistant’ – that has kind of a funny ring to it.

Dorte is not exactly impressed by the reporter’s attempts at humorous wordplay so early in the morning.

“Maybe you should have some coffee?”

Yes, that’s probably a good idea. What’s the best thing about your job?

“Once in a while, scientists or lab technicians come down here with some equipment that’s a little out of the ordinary, and then I have to figure out the best way to sterilise it. I like that – it’s kind of challenging.

And I also like that the work is varied, and that we basically run the whole thing ourselves.” 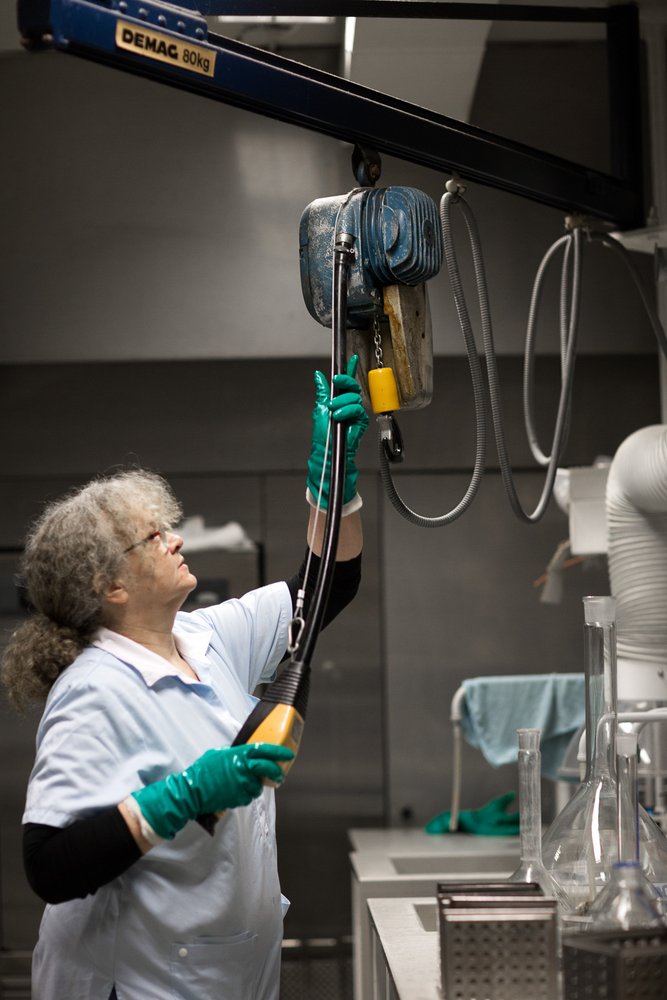 Do you have a lot of contact with the scientists?

No, not a lot. Once in a while a scientist might come down if they have something in particular they want packed up, but it’s mostly lab technicians.”

You’ve been here for 20 years. Is there anything that’s changed over the years?

“We work with the same machines. But you can tell that a lot of people have switched to disposable products. Over time, less glassware has been coming in, and I don’t have as many co-workers. There were four of us labware cleaning assistants when I started – though not full-time. Now there are two of us, full-time. And we certainly have our hands full.” 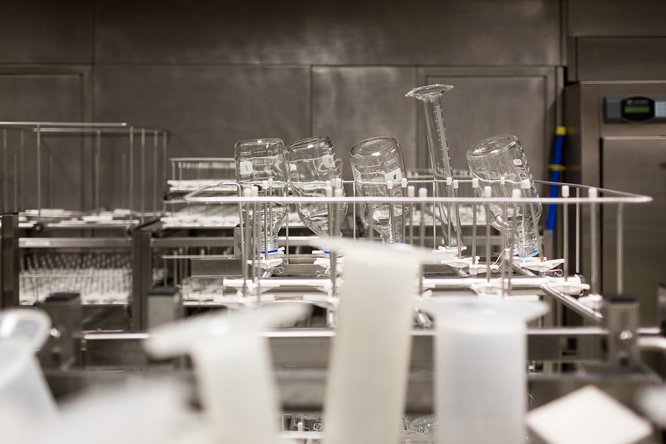 There is another change just around the corner: the labware glass cleaning facility will be moving to the new biomedicine building (the Skou Building, ed.)

“I think it’s exciting. I like when new things happen, and we have to do things in a new way.”

Dorthe gets ready to sterilise a new batch of glassware in the autoclave. To make sure that the equipment is perfectly sterile, she and her co-worker Mogens Glam Jensen process it several times. Finally, they illuminate each piece of glassware with a special lamp which can reveal the tiniest speck of dirt. Next, some of the glassware also has to be sterilised again for three hours at 120 degrees Celsius in a special oven, using dry heat 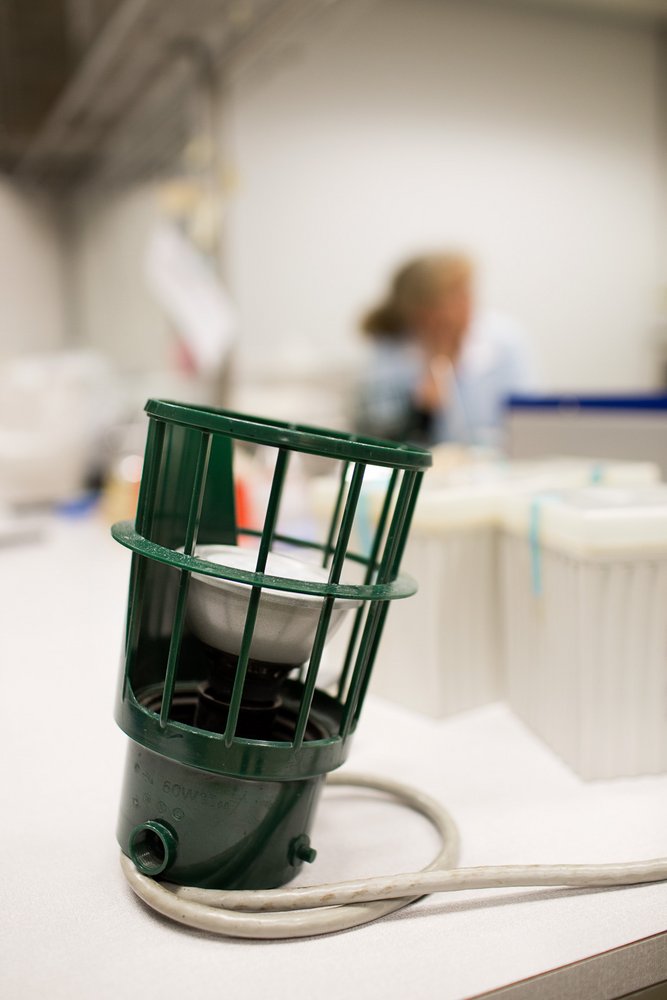 “It can certainly take two or three days from when we pick up the dirty glassware from the lab and soak it and until it’s cleaned, packaged and delivered back to the lab.”

“I’m going to clean some flasks and finish packing some boxes of equipment. In an hour, at 8:30, we take a break and eat breakfast.” 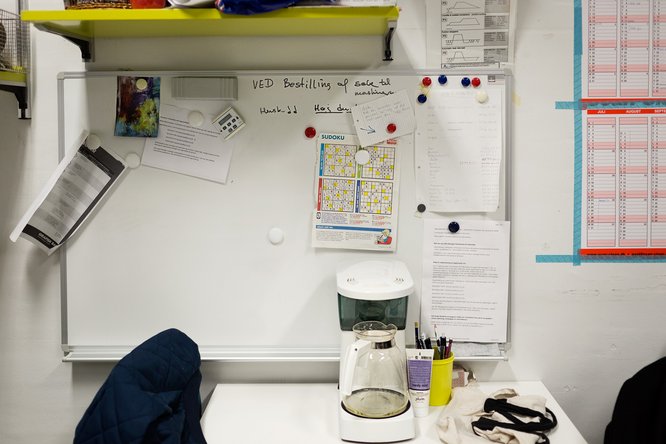 Your shift ends at 2 pm. What do you do in your free time?

“I have three grown kids and a three-year-old grandchild who I enjoy spending time with. And we also have a fitness centre at the housing association where I live, and I go there once in a while. I’ve also signed up for water gymnastics. I always thought I’d take up hiking, but now I’ve got flat feet – it’s because of age and...”

“And gravity,” Mogens put in drily, sending Dorte a teasing glance over the packing table. 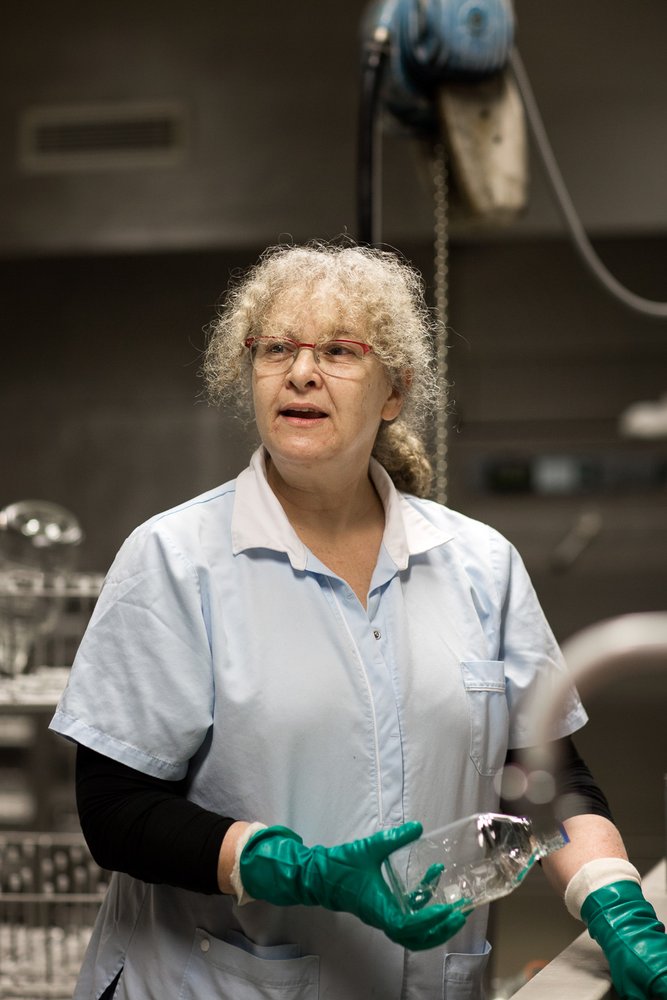