Show me your office – Johnny Laursen

In his office he has a whiteboard where he draws timelines, a filing cabinet where he keeps all his papers, and a large mirror in front of which he can quickly put on his tie. The Dean of the Faculty of Arts is in control of most of the things in his office. But only most of them.

Johnny Laursen shows us into his office at Nordre Ringgade 1 in Aarhus. An office he has had since he took up his position as dean of The Faculty of Arts eighteen months ago.

Bare? How should an office look in your opinion?

"All walls where there aren’t doors or windows should be filled with books from floor to ceiling."

But if you think it’s bare, why haven’t you furnished it differently now you’ve been here for eighteen months? 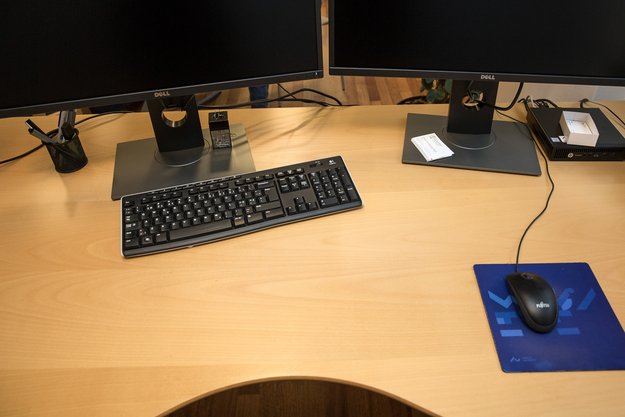 "Someone comes with some plants," he continues, just to be on the safe side.

"Yes, someone from some company, which I appreciate as the room is a bit more cosy and alive."

So you notice the plants?

What do you notice first when you step into other people's offices?

"Which books they have on the shelves. I always hope that whoever I’m visiting will be distracted while I’m there so I can check out their bookcase." 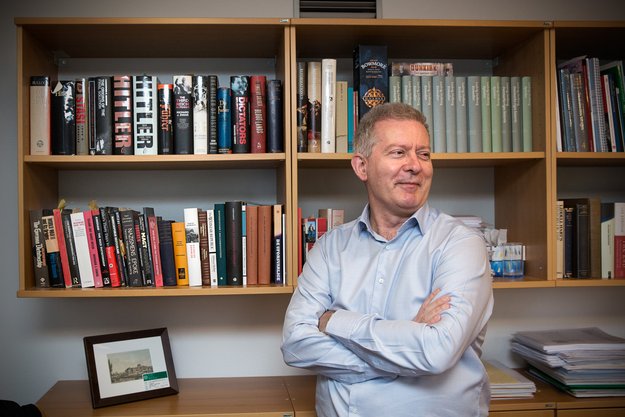 Even though Johnny Laursen's own book collection is stowed away in a basement at the university, there are still some books in his office. For example a couple of heavyweight biographies of Adolf Hitler. The dean has been encouraged to place them more discreetly, but he has thus far chosen to let them remain in his bookcase.

"The books form an excellent framework for the meetings," he explains.

Here it is perhaps best to mention that Laursen does not have Hitler close at hand to find inspiration for his leadership style. Rather, it is because he wrote about the fall of the Weimar republic and subsequent power takeover in Germany by the national socialists in his PhD dissertation. 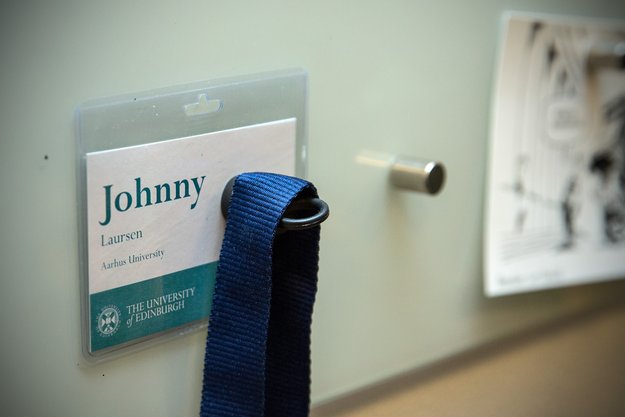 In fact, the dean is not really into all the formal stuff and he is in his own words definitely not someone who judges others based on their title.

"No, it's the personal relations that are crucial for me in all relations," says Laursen and draws attention to the dog tags, as he calls them, that hang from a glass board and come from a conference at the University of Edinburgh.

The dean has kept them because everyone at the conference was presented without their titles and primarily by their Christian name. That was also the case for the university’s rector Sir Timothy O'Shea.

But even though the tradesman’s son from Overlade in North Jutland likes to keep it casual, he also has great respect for official protocol.

"I'm one of the few humanists who have done my military conscription in the Royal Danish Life Guards." 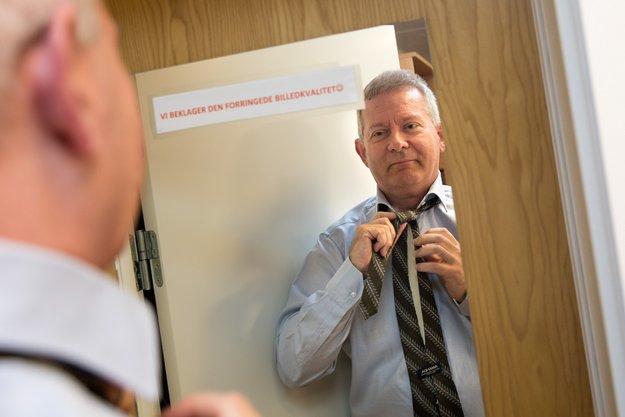 He can also tie a tie, although he only wears one when the occasion requires it. The dean notes that his tie is 26-years-old and rather falling apart. But he cannot bear to get rid of the olive-green tie because it reminds him of a two-year stay at the European University Institute in Florence.

This is not a traditional university, as it only admits PhD students who work in economics, law or history. Laursen was writing a project about European politics and took his wife and two daughters with him to Italy.

"I remember it as a lovely time for us as a family, because we could follow the typical Italian rhythm. And because our daughters went to an Italian school, we were part of a large community. We still have friends from back then that we meet up with today. I also have colleagues from that time who are today spread around the world," he explains.

His life today consists of other things than enjoying a glass of chilled Tuscan white wine under the shade of an olive tree. 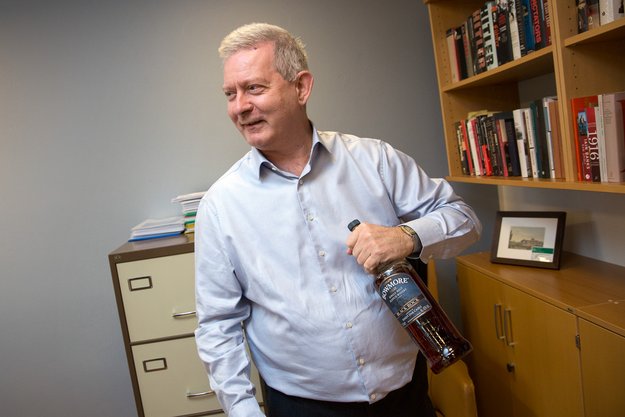 A dean at a humanistic faculty can sometimes be in need of a whisky and Laursen has very conveniently been given a bottle by colleagues at the University of Edinburgh. It lives in the bookcase when it is not standing on his desk. 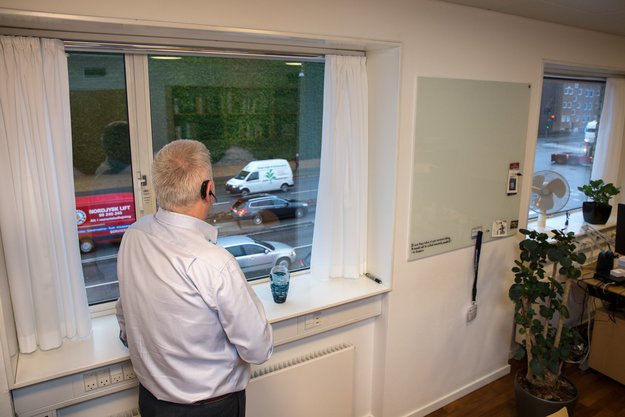 The view of the pulsating life on Nordre Ringgade is what the dean like most about his office, so he always stands there when talking on the phone.

"I like to watch people coming and going, and I particularly like to keep an eye on colleagues that are my own age and who are getting a little thin on top."

So you mostly look at balding, middle-aged men?

"I’d probably phrase it differently," says the dean with a wry smile as he continues to look out of the window.

"But it can be difficult to miss them..."

The dean has to drag himself away from the view when the photographer asks him to sit in the chair that the journalist had taken next to the dean's conference table.

"I’ll just dry that up...", says the journalist as she stands up. Before looking on in surprise as the dean – who does not exactly belong in the flyweight boxing category – nevertheless zips across the office, grabs a Kleenex from the bookcase, seems to turn in mid-air and zips back to dry up a coffee stain on the table left when the journalist poured milk into her coffee at the beginning of the interview.

"I can't stand spilled milk," exclaims Laursen after seating himself in the chair.

"People often spill coffee during meetings in the dean's office. Actually, so often that I almost suspect they do it on purpose. I completely lose concentration!"

Laursen does not say anymore. He just sits there with a little crooked smile on his face and his arms crossed. He knows there is a little spot. And that it is his.

What do you do in those situations during meetings at the dean's office? 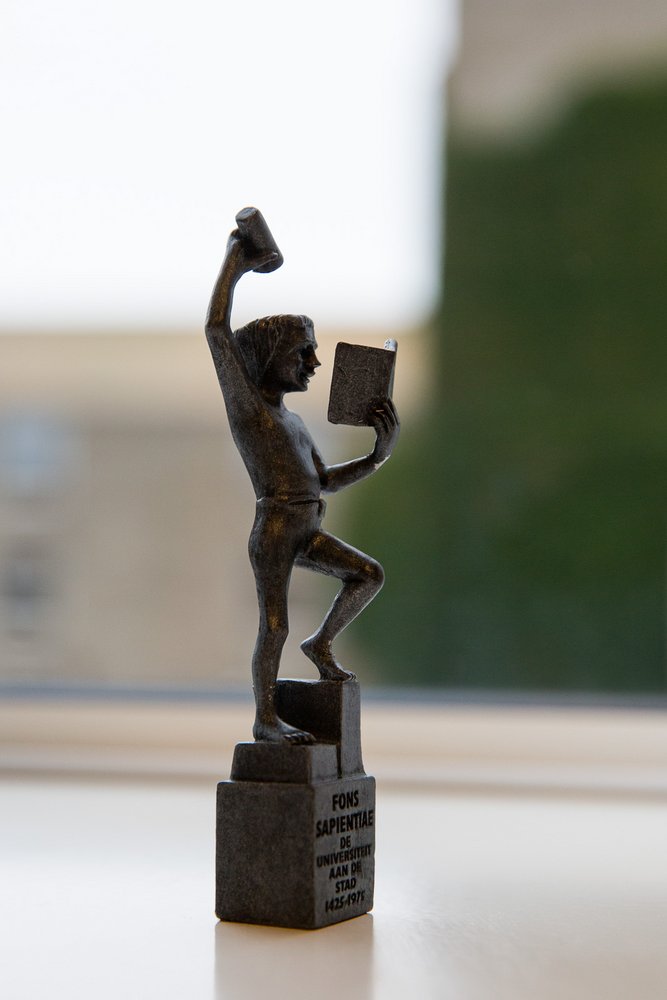 The figure standing in the dean's window depicts a statue in a fountain on the square in front of the university in Leuven, which was a gift from the rector's office to the city when the university celebrated 550 years of existence. It is called Fons Sapientiae, which means the source of wisdom. It is uncertain how Laursen would react if anyone spilt from it...