Show me your office – Preben Clausen

Preben Clausen watches birds and does research into the optimal management of wetlands.

There where the road gently bends lies beautiful Kalø Manor House. The manor house is located just outside the town of Rønde in southern Djursland and is home to researchers from wildlife Ecology which is part of the Department of Bioscience. One of them is senior researcher Preben Clausen. He carries out research into birds and the management of nature reserves. Such as, for example, management of meadows with endangered birds that live there. One of the things he might examine is why a species is threatened. 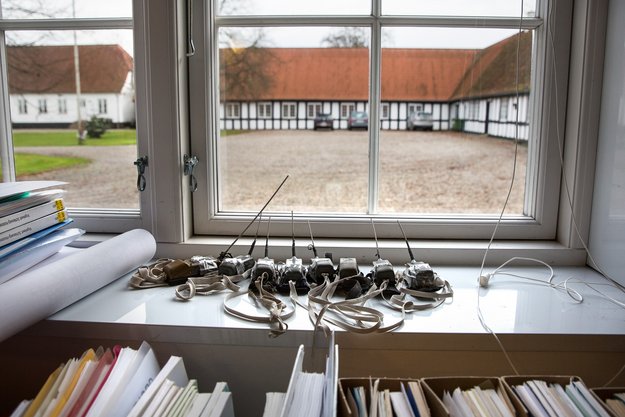 Preben Clausen has been interested in birds ever since he was introduced to bird watching by his father as an adolescent. As a young man, he spent much of his time in ornithological associations, and today birds are the focal point of his professional employment. But even though Clausen’s work is largely a labour of love, as a senior researcher he is subject to some frameworks that are determined by the authorities. 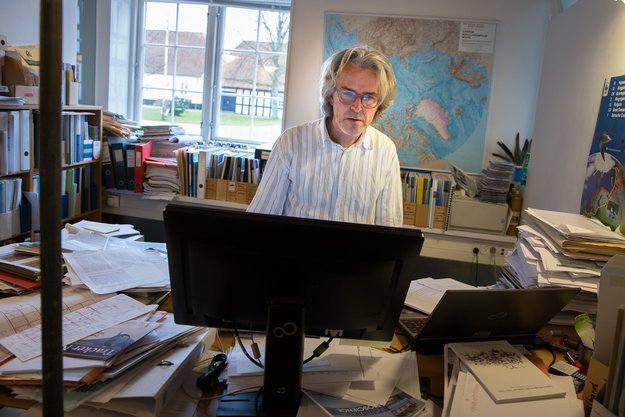 "Much of what we are working on is dictated by the Ministry of Environment and Food. Most often it starts with the ministry having an issue and asking us a question in connection with this. And because many of us are old hands, we’ve still got all the old literature that the young people don’t believe exists because it’s not available digitally. But it’s all still there on our bookshelves, so in some situations we can just hand-pick what’s needed from the shelf and give the ministry an answer," explains Clausen. 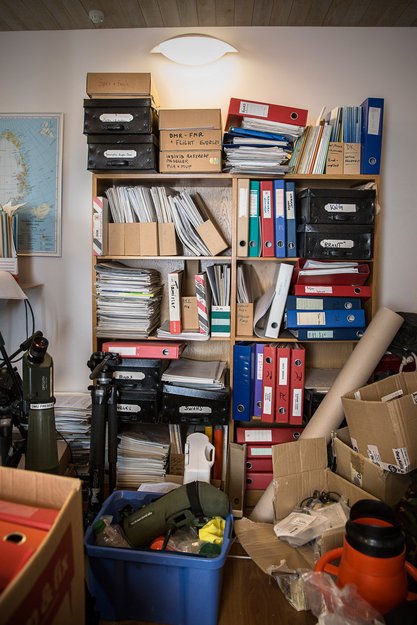 "In other situations, we can reply that if we look at the international literature, we believe that the answer could be such and such. Then there’s a third situation where we have to say that we can’t provide a proper answer because we don’t actually know." 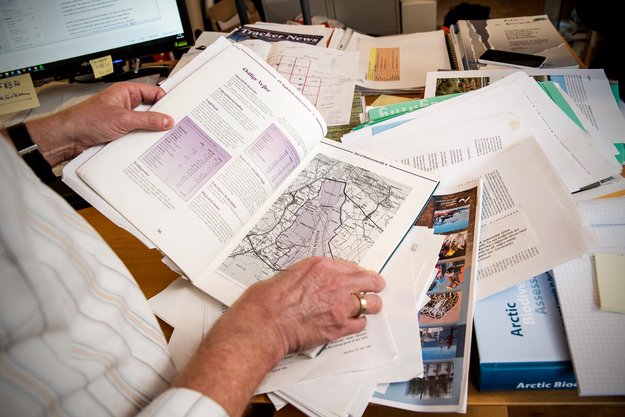 The latter situation can lead to the researchers receiving a task they need to resolve for the ministry.

"We’re often given an assignment over a shorter or longer period where we have to get an understanding of the issue." 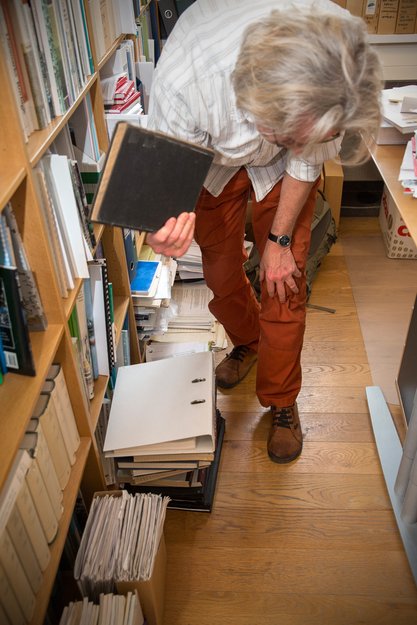 Preben Clausen and his colleagues also carry out fixed tasks for the authorities. One example Clausen mentions is a status of the birds and species of animals that hunters can hunt in Denmark. The researchers make this status based on the monitoring of game in Denmark, which they have been responsible for since 1949. This status of game, which is prepared every 6 years, is part of the basis for decision for any possible revision of the Danish Game Law. 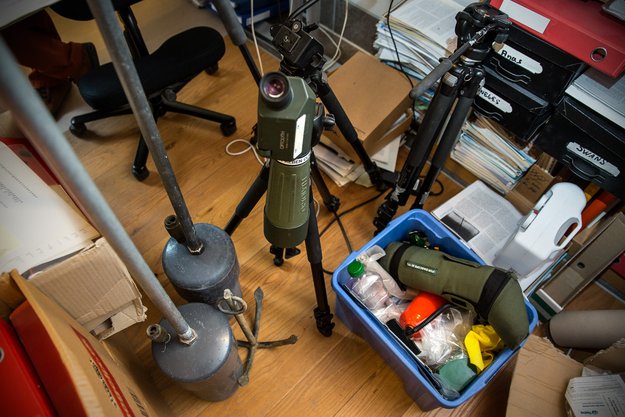 Counting birds in the Tønder Marsh used to be an annual recurring event. But will now only occur every other year," says Clausen.

Do you yourself wonder around the Tønder Marsh in your waders?

"Yes, we’re typically two or three men who travel down and count birds in some fixed campaign periods each year. But we’re also tasked with determining the distribution of the birds in the area. Meadow birds are, for example, very dependent on meadows being wet, so we map out where it is wet and where it is dry." 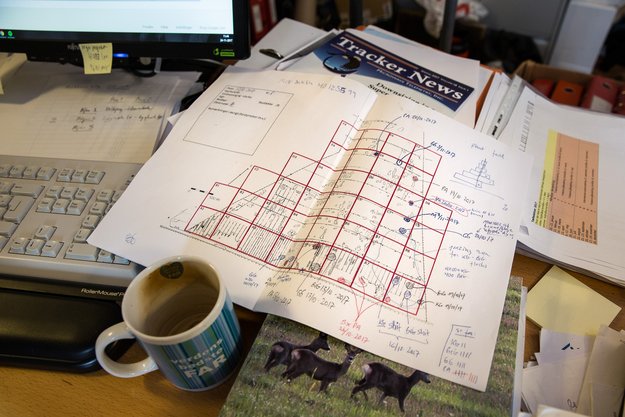 Preben Clausen points to a field map lying on his desk.

"It’s a field map that shows where we’ve collected droppings from some birds that we’re going to examine in relation to the birds' choice of food. But we use similar maps when we need to map the birds' distribution in an area. We then digitise the maps with the detailed information about where we found it to be wet and dry, respectively."

The researcher subsequently analyse the results in relation to how he/she had expected to find the birds. The results can e.g. lead to different management of the area if this is appropriate. 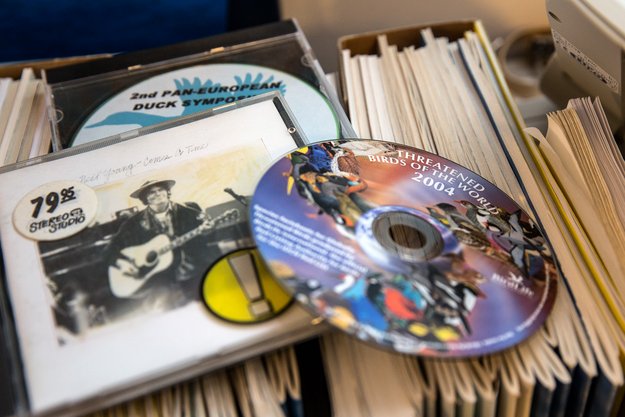 However, it is not always the case that the action taken as part of the political reality at Christiansborg (the Danish parliament, ed.) is appropriate in relation to the reality the researchers at Kalø meet.

"A political system has no patience. So, it doesn’t understand that we researchers say that there can be many variations from year to year – such as precipitation or the weather before the breeding season last year – that we need to look into this over a four-year period, after which you can get your answer."

There are also other areas where Clausen notices that his daily work is subject to certain conditions which are determined politically. 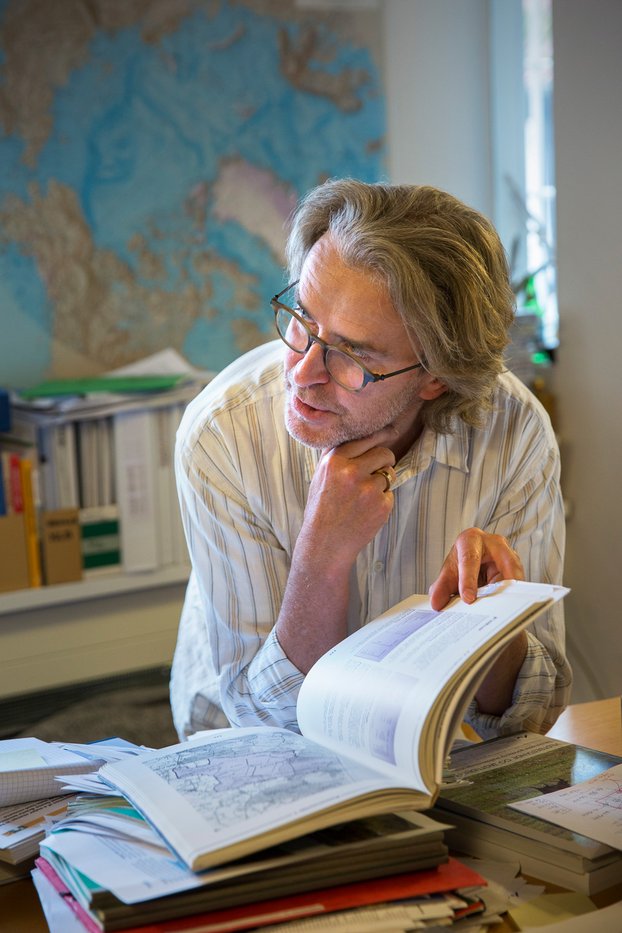 "The ways things work over in Christiansborg is that the opposition teases the government, so the opposition puts teasing questions to the system. And every time one of these questions turns up in the parliament's Environment and Food Committee – and this happens again and again – it ends up on my desk,” says Clausen and points to the email system on the computer.

"Then I have to reply to questions about what we think or what they should reply. We have a maximum of two weeks to come up with replies to these kinds of questions. Sometimes we can explain that we don’t have a reply but we’re currently investigating it. But very often we’ll end up saying we have some partial results that indicate..."

How do you act as a researcher in such circumstances?

"I’ve got many years of experience of providing professional advice so I can easily find out where the professional limits lie. In some situations I can say that we don’t have professional data to be able to answer."

Do you sometimes come under pressure when you say that you simply don’t have the professional data?

"Yes, in some situations we’re asked whether we can’t come with an estimate or something. In some situations we do this, while in others we don’t we don't. It's a question of assessing how far out we are in terms of a balancing act; not running the risk of saying something that’s completely wrong. So, if you don't feel you’ve got an idea of where things are going, then you have to refrain from saying what would be most correct." 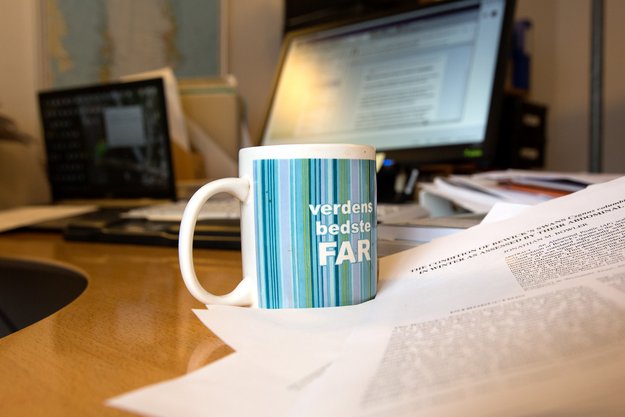