Anna Louise Dolan Plaskett is leader of the Faculty of Arts graduate school administration team and a member of AU’s board. She’s also hardcore fan of the TV series Robin of Sherwood. Who has actually danced with the leading man, Jason Connery. Whose father’s name is Sean – that Sean.

What do you have on your desk right now?

Not that much, and that’s actually pretty standard. Simplicity and structure suit me, and a lot of what I work on is digital. 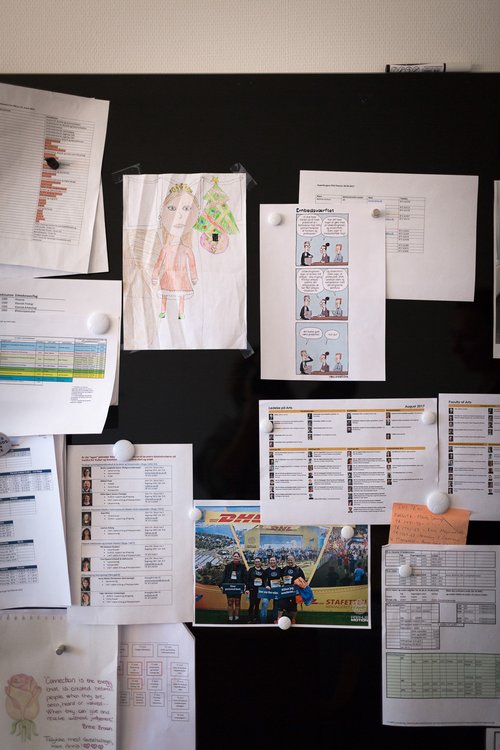 Anne Louise points at her bulletin board, where, along with a lot of lists and a single child’s drawing, she’s hung up a print of a cartoon from the online newspaper Altinget’s popular comic strip Embedsværftet, which satirises Danish civil servants and Danish bureaucracy, or ‘embedsværket’. The cartoon is a satirical critique of Danish immigration legislation, which has resulted in several international researchers being fined for illegal sideline employment when performing normal academic functions, such as co-examination or external assessment. A situation which is actually not at all amusing, Anna Louise points out.

“Those rules cause us so many headaches. It’s a requirement that a certain proportion of the external assessors of PhD dissertations we use have to be international. And we have to ask all the assessors about their nationality to make sure we don’t run into problems with the rules on sideline employment. This causes a lot of extra work, and I also think it’s embarrassing and undignified.” 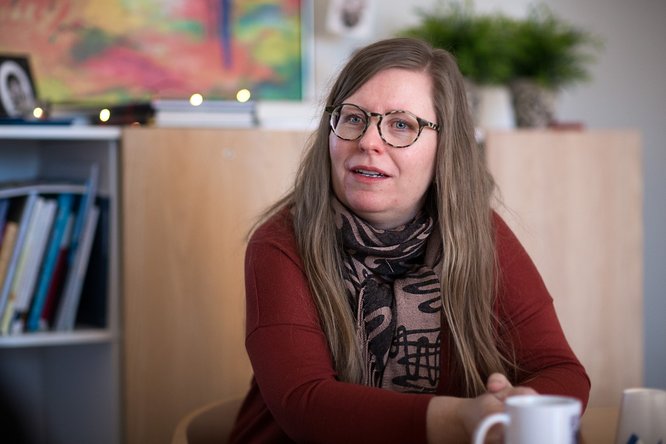 At the moment, Anna Louise and her colleagues are busy enrolling new PhD students and organising receptions for them in Emdrup and Copenhagen.

“We’ve been working on their cases for months by mail, so it’s fantastic to finally meet them in person at these receptions.”

What objects in your office reveal the most about you?

“That would have to be my mouse mat and my mug with pictures from the 80s TV series Robin of Sherwood. The series is based on the legend of Robin Hood and takes place in medieval times. When I saw it, a new world opened up for me, and I’ve been a hardcore fan ever since. I go to conferences in Wales where there are 200-300 of us fans who meet with the TV producers and actors. And we have a total nerdfest going on on Facebook. My daughter is also a huge fan –she’s in her last year of secondary school right now – and it’s cool to have that in common.” 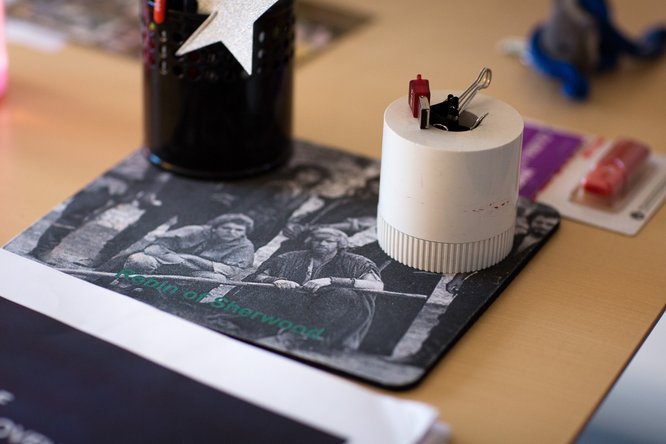 In fact, Anna Louise mentions in passing that both she and her daughter have met and danced with the leading man of the series, Jason Connery. And yes, that would be Sean Connery’s son.

What grabs you about the series?

“It’s the spirit, the sense of community and warmth in the series. It’s the fight against the system. The fight for the oppressed. And the fight for justice.”

If your office caught on fire, what would you save?

“My pictures of my kids. They’re the most important thing in my life.” 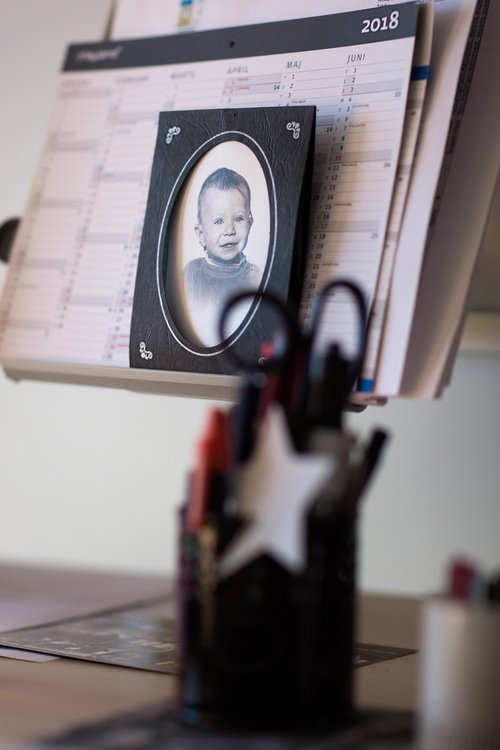 Anne Louise’s two daughters are 19 and 14 years old. Which is not immediately evident from the photos.

“Yes, I know, the photos aren’t quite up to date. A number of my co-workers have pointed that out as well.”

Anne Louise turns toward her bookcase.

“These are also pretty important to me,” she says, placing two booklets on her desk – the Danish Act on Access to Public Administration Files and the Danish Constitution. There are handwritten notes on the front pages of both folders. 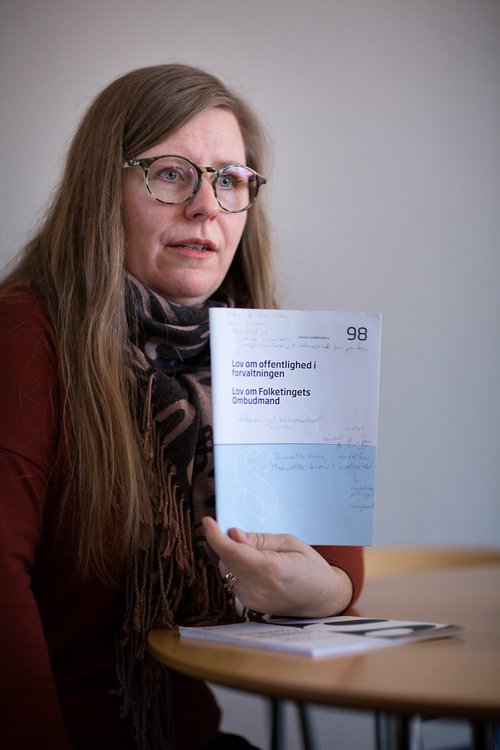 Why is it important to you to keep these two legal texts at hand?

“I like to take them out and refresh my knowledge on a regular basis. I think it’s important to do that when you work with administration. I have a strong sense of justice, and I believe it’s important that we exercise our administrative functions as correctly as possible, and on the basis of the principle of equal treatment. But it’s difficult, because there are a lot of points of view and opinions in every case.”

What’s difficult about it?

“When we get a request for something, it’s not certain that the party contacting us is aware that there are laws and rules that apply to the issue. But what we’re here for is to comply with those laws and rules, and that puts limits on what we can do. There’s nothing personal about it. I’m very conscious of this, and I always reflect on it. You have to, as an administrator.”

What about the Constitution – why is it important to you?

“Well, the Constitution is the foundation. It’s not a law I use every day, but I like understanding the structure in of the rules and knowing where we are in the hierarchy of laws.”

You’re also a staff representative on AU’s board –any signs of that in your office?

“No, not really. I mean yes, there is a memo on my desk right now, but otherwise most of the material connected with the board is digital.” 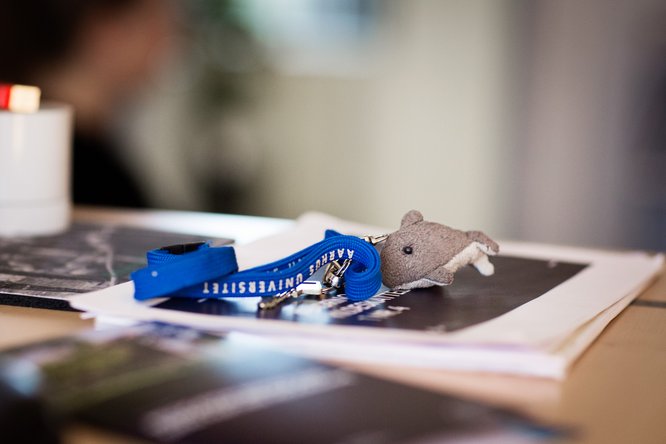 The dolphin key chain has followed Anna Louise since she started working at AU in 2002. “I won it in a Christmas ‘pakkeleg’ (package game) when I was an intern at Aarhus University Press. After that I, I got at job at the history department, where I worked until 2011, when I was transferred to the central administration in connection with a major reorganisation of the university. That was an extremely frustrating time, because so many changes had to take place at once. And it took several years for me to settle into the new organisation. But I think I ended up in a good place with good professional challenges.” Photo: Melissa Bach Yildirim

How much of your time do you spend on board duties?

“I spend a fair amount of time on it; there are six or seven meetings a year, including a seminar, and they require preparation. And I follow up on a lot of what’s going on in the board by speaking with my constituency, and here I’m thinking of union rep clubs, for example, and just generally visiting different departments and units. Serving on the board as a staff rep is an unusual experience. As an employee, you’re deep into the practical side of things, but on the board, we’re all the way up in the helicopter at the strategic level. It takes time to get used to that.” 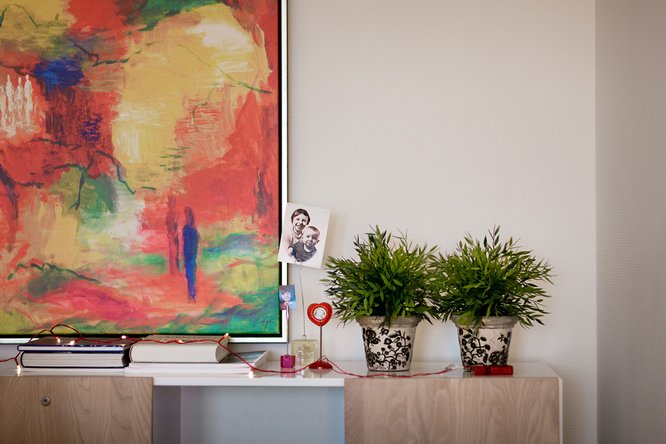 “I didn’t choose the art on the walls myself, but I needed to hang up something or other to do something about the acoustics.” Photo: Melissa Bach Yildirim

What about the confidential information you have access to through your service on the board. Is it hard to keep it to yourself?

“No, because I’m used to that from serving as a joint union representative.”

“I don’t believe it’s appropriate to be wearing both hats at the same time. It would be hard to represent the interests of my colleagues while also participating in making decisions at the strategic level.” 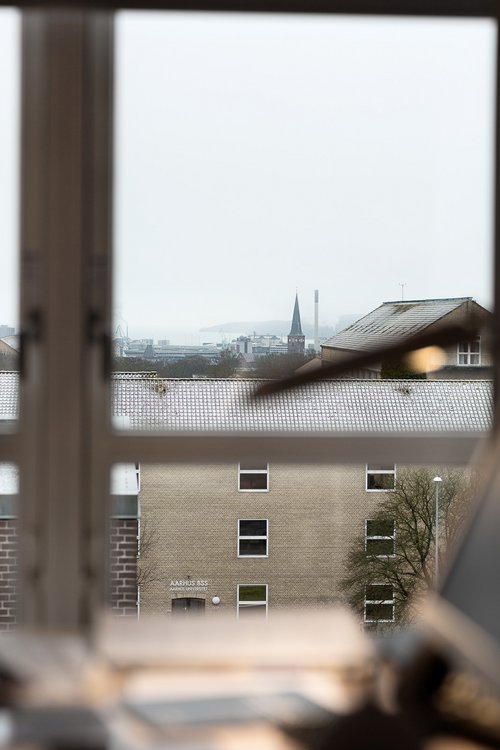 “The view is by far the best feature of my office.” Photo: Melissa Bach Yildirim

After I leave, what are you going to start working on?

“I’m going to organise a whole bunch of meetings. We had elections to the PhD committee this autumn, and we have new members now. So I’m going to schedule the meetings for all of 2018, and that’s a puzzle with a lot of pieces. I also need to start planning my colleague Bettina Acthon’s 25th work anniversary, and I’m really looking forward to that.”