Dorte Hagen Jensen is a teaching associate professor of musicology at the Department of Dramaturgy and Musicology, and her desk is covered in classic analyses of Bach and Beethoven. But when she starts bashing away at her drum kit, the rhythms are pure rock and roll.

Far from all of her students know that Dorte played in the band ’Sonjas Søstre’, (Sonja’s sisters) back in the 70s, an extremely active member of the left-wing/women’s movement scene in Aarhus.

In 2009, the band was resurrected after a 30-year break. Seven years later, the put out their first record, the eponymous Sonjas Søstre, and they’ll be playing at several venues in Denmark this spring, including Jazzcup in Copenhagen and the Women’s Museum in Aarhus. 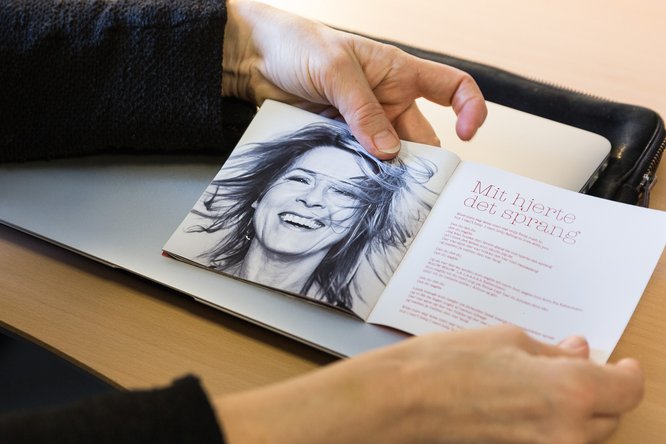 “I don’t think I want to subject the students to having to try to relate to our music. And in any case, nothing would be easier for them than to judge what we do as out-of-date,” she explains.

This is not to say that Dorte and the rest of the band don’t stand by their music.

“We do, absolutely. We are a group of four older women who get up there and play what we can play. I mean, we’re not virtuosos – we play four beats per bar. But then there are lots of men who do the same thing,” she says. 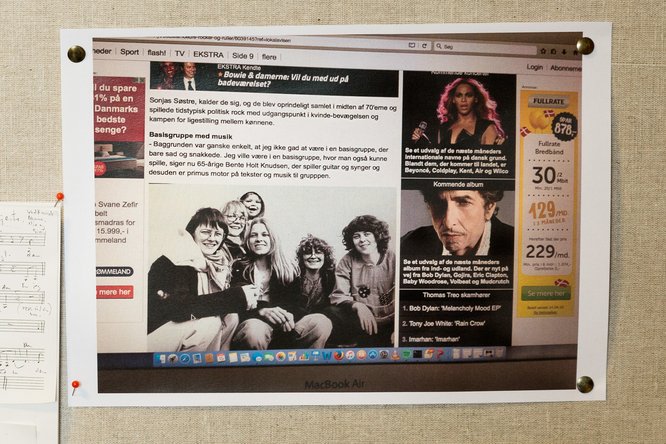 Back in the day, Sonjas Søstre played protest songs in connection with strikes, demonstrations and other political events. Today their texts focus more on life experiences – primarily women’s. And for Dorte, Sonjas Søstre also provides a musical break from the classical music which fills her working day – and her office.

“Here are some classic analyses of scores by Bach and Beethoven I’m going to go over in my class tomorrow. There are also som auditive analyses, which are about expressing the music in words.” 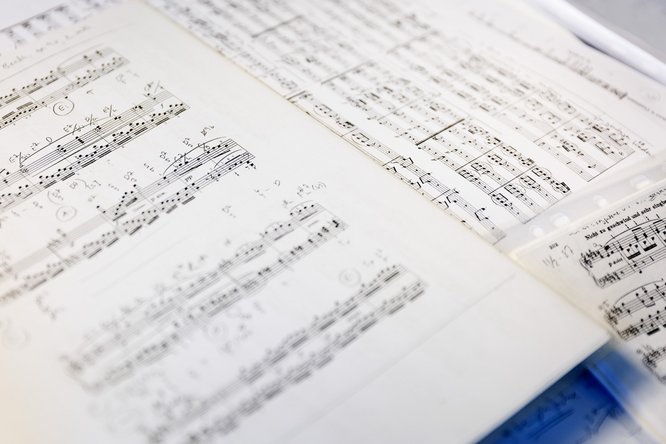 Dorte teaches classical musicology at the musicology department together with Associate Professor Jens Johansen. And even though she plays rock in Sonjas Søstre, classical music has always been part of her life. 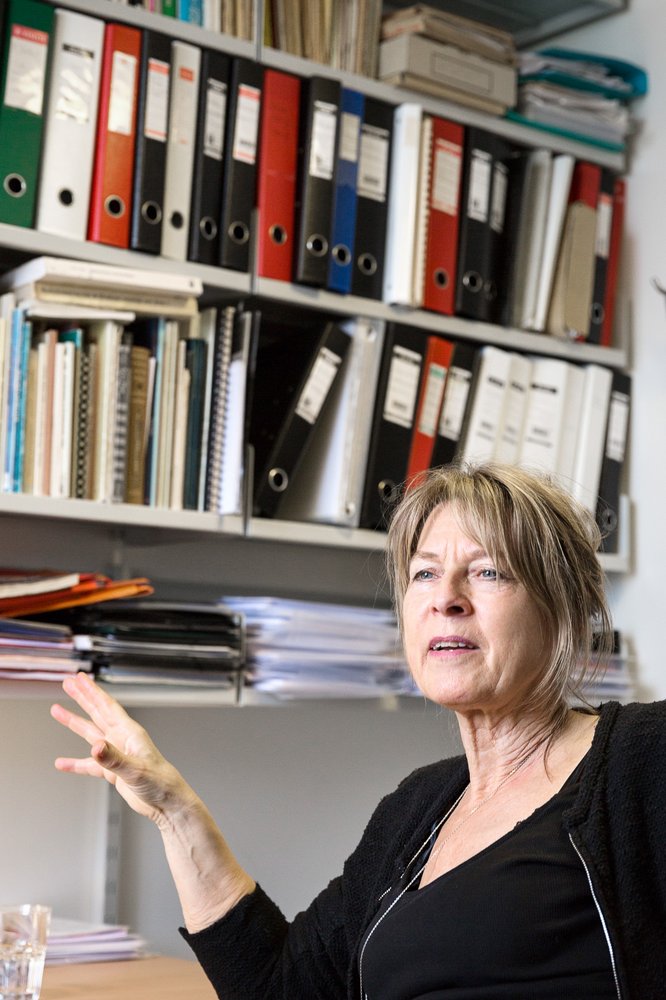 Dorte also plays classical piano with a pianist. “She sight-reads it, but I have to practice a lot before we play.” She also plays drums in the associate professor band at the department. “We play at the faculty summer party and at freshers’ week – and the students really are a great audience. I also think they find it amusing to see us in that role.”

“My parents listened to a lot of classical music, and while my sister sat in her room and recorded The Beatles on her tape recorder, I sat in my room and recorded Mozart. I have a large repertoire in the genre because I’ve been listening to it for so many years. And then it turned out so that I also ended up working with classical music professionally.” 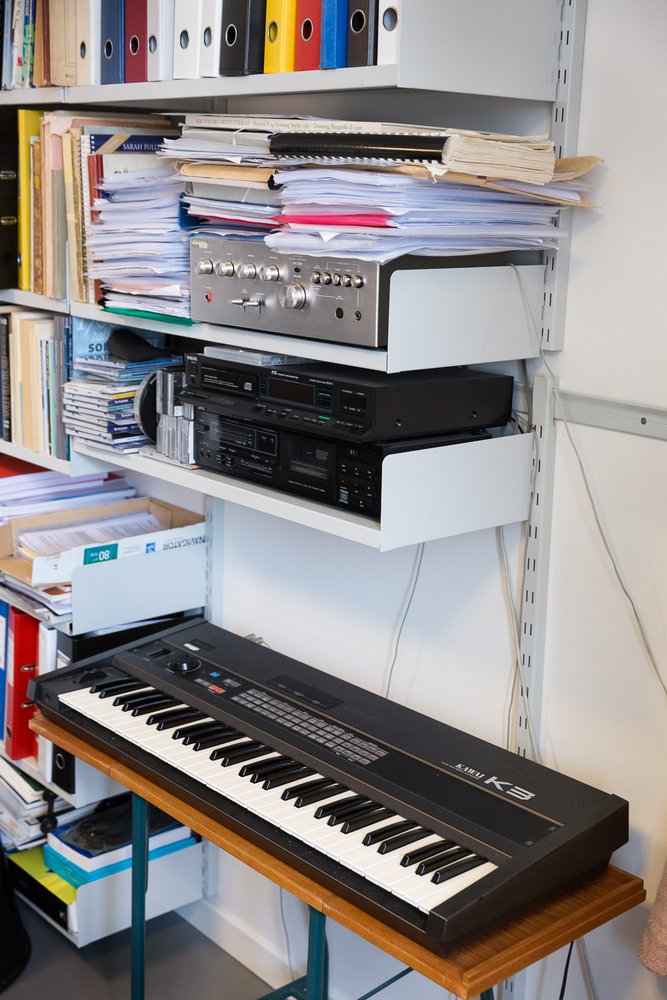 There’s a keyboard behind you – does the sound of music often come out of this office?

“No, actually not. I don’t really use it for playing music. I use it when I’m checking the students’ assignments and analyses – just so I can hear a particular passage in the piece.”

In fact Dorte always listens to the music when analysing a piece.

“And I always use sound when I teach.”

Dorte surrounds herself with sound at home as well. She either listens to ‘smart people radio’ (P1) or ‘classical radio’ (P2). And if there’s a gorgeous classical concert on the radio, Dorte often listens to the very last note – even if it lasts several hours.

What would you save if your office burned down? 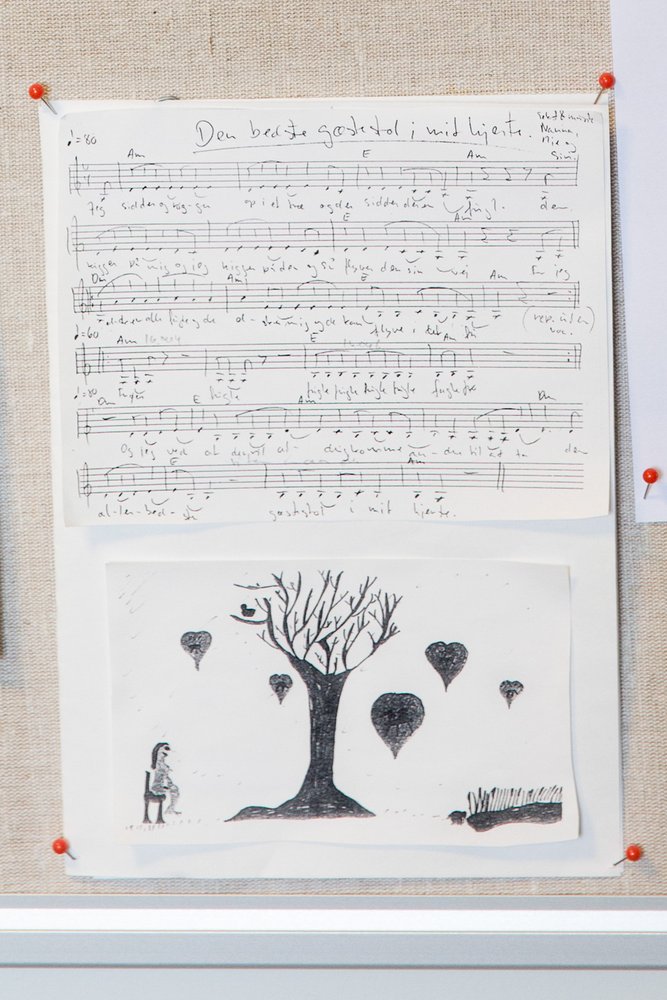 “I would save that little song on my bulletin board right there – my daughter composed it when she was little. And the four or five binders with my Bach notes and analyses. They’re thoughts I’ve noted down over the years.”

What does a typical working day look like for you?

“Usually, it starts in the morning at home unless I’m teaching. I’ve discovered that I concentrate best between 8am and 10am in the morning. So I don’t want to waste my time in traffic then. It’s a bit hard to predict where I’ll sit and work. But wherever I sit down to work, that’s where I stay. For the next many hours. At home or at the office.”

After I leave, what are you going to start working on?

“I’m going to prepare a class on a piano sonata by Ludwig van Beethoven and look at how he put a sonata together.” 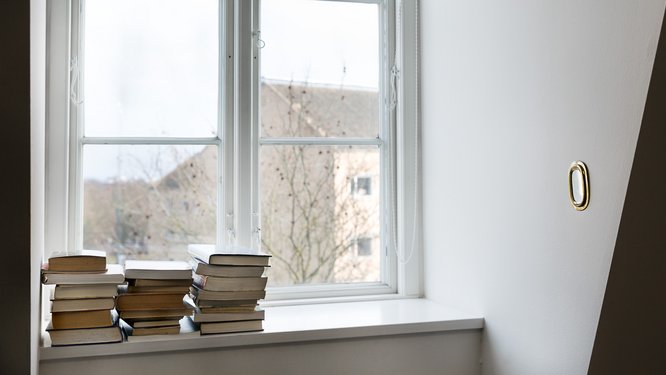 The view from Dorte Hagen Jensen’s office. She can keep an eye on the weather over the Bay of Aarhus from here. Which is not uninteresting, if you sail in your free time – like Dorte – and really want to get out on the bay every Thursday during the sailing season. Dorte is a Folkboat skipper. Dorte was given the small mirror on the wall by a former ‘all-rounder’ secretary at the department. 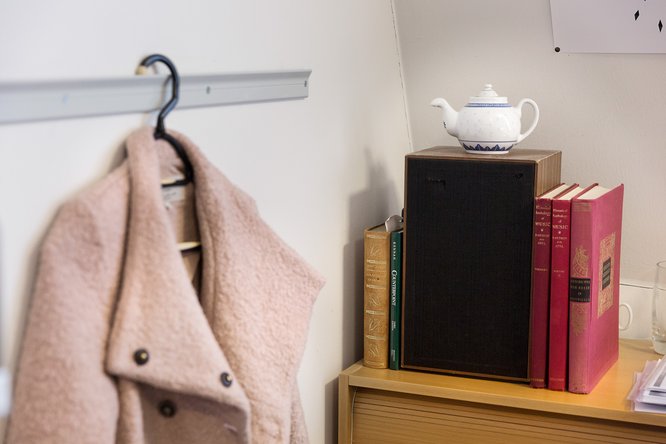