Show me your office – Irina Kazankova and Hans Henrik Hansen

They met in Saint Petersburg, where she was building nuclear submarine components, nuclear power plants and space rockets and he was working on his dissertation. Two children later, they moved to Denmark together, where they both found work at what is now called the Department of Business Development and Technology in Herning. Irina Kazankova and Hans Henrik Hansen are still sharing their lives here – and an office – twenty years later.

In the morning, they get in the car together and drive the ten kilometers from the suburb of Lind to AU’s campus in Herning. And in the afternoon, they drive home together. And in the interim, they sit a few meters from each other in an office they share with three other researchers.

In short, Associate professors Irina Kazankova and Hans Henrik Hansen see a lot more of each other than many other married couples would be comfortable with.

“We’re almost fused together into one person – including from our colleagues’ perspective,” says Hans Henrik. 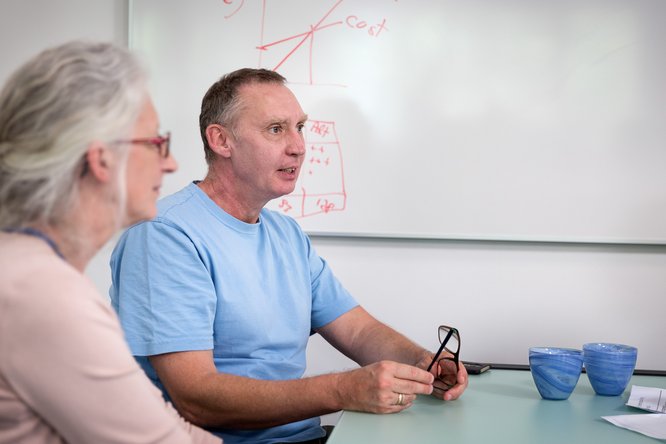 Both he and Irina teach on the Business Development Engineer programme, which is the largest degree programme at the Department of Business Development and Technology located on AU’s campus in Herning. Irina teaches mechanical engineering and computer simulation and product development, among other subjects, at BSc level, while Hans Henrik teaches both BSc and MSc students technical and mercantile subjects. Both have Master’s degrees in engineering, and Hans Henrik also has an MSc in economics and business administration.

Normally, the office is as busy as a train station, because students are always dropping by with questions about this and that, explains Irina. But it’s quiet at the moment, because it’s exam time, and the students are are busy finishing up their semester projects. 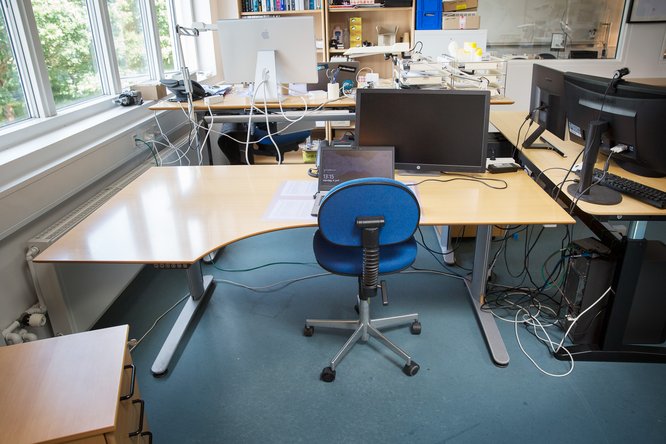 It appears that Hans Henrik has taken advantage of all the peace and quiet to tidy up his desk. It’s completely bare except for a laptop, a monitor and a mouse.

“Several of the students have asked whether he’s getting ready to retire,” laughs Irina, whose own workspace is a little more personal – there are fresh violets in a small vase, a map of the world on the wall and little elf figurines on the bookshelf. 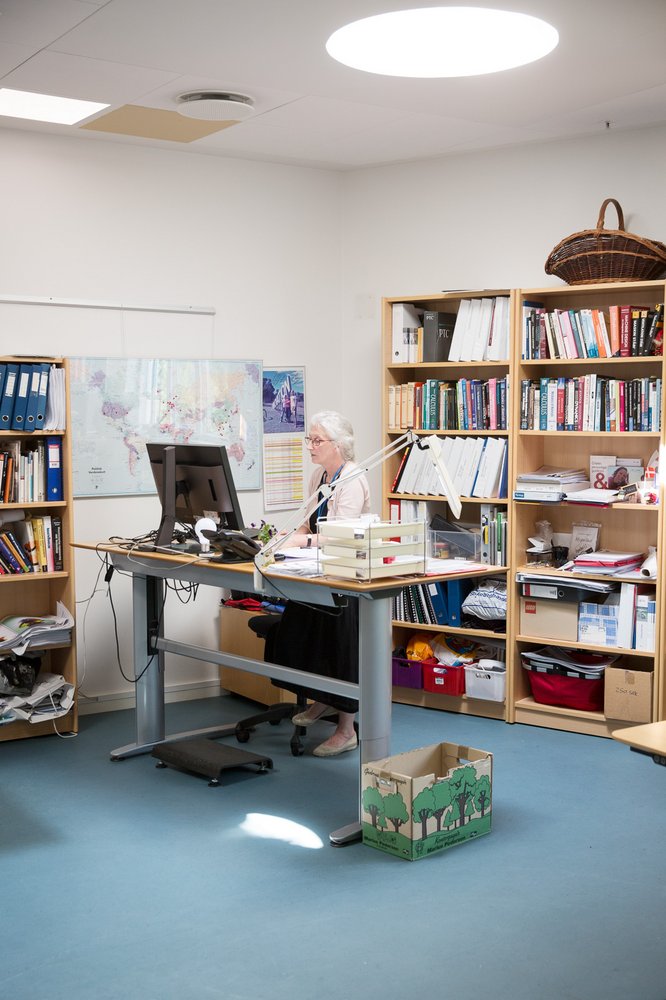 Well, there’s obviously not a lot to talk about on Hans Henrik’s desk, so what’s on your desk right now, Irina?

“I’m also programme coordinator, and I just got back from a meeting where we talked about the upcoming introduction week for new students, and how we’re going to welcome them. I’m also working on the class schedule for next semester. And so there’s a sense of the calm before the storm. Student will be turning in their reports soon ,which are the projects they’ve done in collaboration with companies. I’m supervising four groups of students, and it’s always challenging to read their projects. There can be topics I don’t have a lot of knowledge about, for example sustainable production, where I have to try and understand the problem from the company’s perspective in order to advise them. I think that’s exciting.” 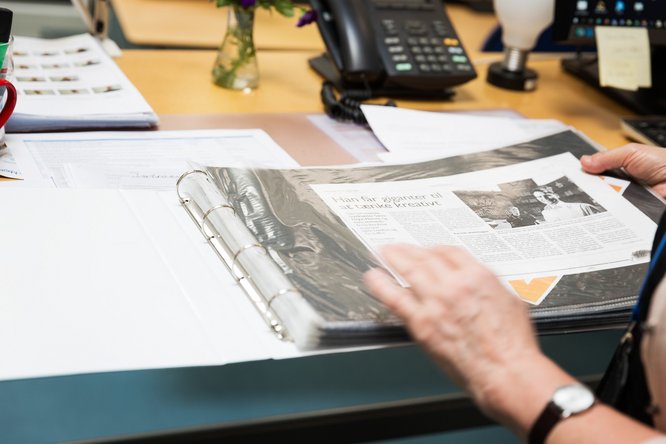 She pulls a scrapbook out of the bookcase.

“At open house events, we’re always asked what you can do with the degree programme. And so I’ve been collecting media coverage of projects the students have done for years. For example, there were some students who built a wave machine for the Coast Centre in Thyborøn. Now most media coverage is digital, of course, but I used to collect cuttings from the newspapers.”

What would you take with you if your office caught on fire?

“My computer,” Irina says, because she’s counting on Hans Henrik being able to get out of a burning building under his own steam.

When asked the same question, however, Hans Henrik replies that he would save his wife from the flames.

“And my colleague Ulrich,” he adds. Perhaps because Ulrich is standing within hearing range. Then Hans Henrik returns to Irina.

“I can’t live without her,” he states in a tone that doesn’t sound like an attempt to be romantic. More like a statement of fact. 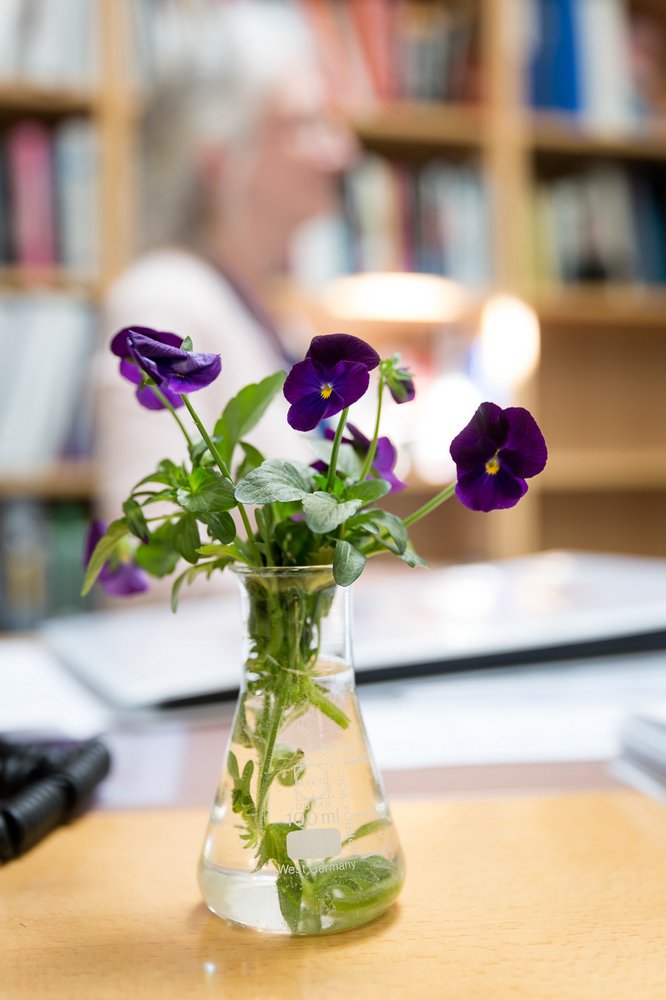 Which of the things in your office says the most about you as a person, Irina?

“There’s actually not much that does. The map of the world doesn’t show the countries I’ve visited – it’s the countries our students have visiting during their internships. And I don’t have any pictures of my children or grandchildren here at the office...”

She bends over and pulls a box out of the bookcase. It’s full of mechanisms.

“Maybe this. I teach mechanical engineering, and my courses are very technical. But it’s important to me to teach the subject in a hands-on way. My own education was very technical and theoretical, but they have to be able to use what they learn here in practice. I also collaborate with the engineering workshop here at the department, where we set up experiments and do computer simulations, and we also work with local businesses.”

With her grey curls and pale pink cardigan, Irina doesn’t look like a prototypical engineering wizard. But appearances are deceptive. When she was working on her PhD dissertation in the early 90s and was involved with different research projects in Saint Petersburg, you couldn’t just go out and buy the programs you needed for your calculations. You often had to write them yourself. So she did. 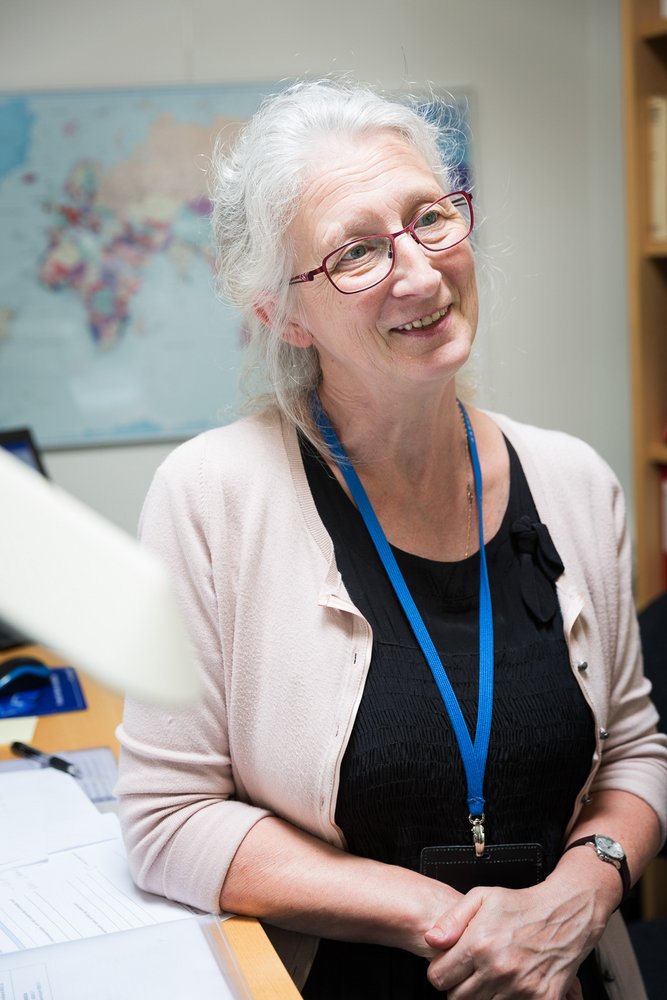 “At that time, the Soviet Union had just been dissolved, and there were a lot of things that didn’t work. Including in the university sector. In my division, there had been forty employees, but there were almost none left, because the teachers weren’t getting paid their salaries and had to find other ways of making money. I couldn’t finish my PhD dissertation either, among other things because the assessment committee was disbanded. It was a messy time in a lot of ways, for me personally as well.”

In the middle of the mess, a Hans Henrik Hansen from Denmark showed up.

“My PhD supervisor said that I should go abroad in connection with my doctoral work, and that most people went to the States. But that was too far away for me. The idea of Saint Petersburg was easier for me to handle,” remembers Hans Henrik.

But the young PhD student found Russia anything but easy to handle.

“Fortunately, Irina took it upon herself to help me,” he says, glancing at his wife.

She explains that she considered it as something of a moral duty. In the beginning.

“He needed help finding an apartment, getting his visa extended and getting settled in at the university. I spoke English, so it made sense for me to help him.”

They discovered that they had shared academic interests and began working on some projects  together. She was already involved in several research projects. For example, she was helping to develop a new method of constructing watertight bulkheads in nuclear submarines and computerized cooling systems for nuclear power plants. She was also involved in developing panels for Russian space shuttles which could cook down their heat shields.

“Irina was the very best at developing programs to calculate the mechanical deflection of things, which was something I needed in my dissertation, which was about how ultrasound could be used to trace ships or piers on the ocean surface – back then we didn’t have sonar equipment, you know. And then something that often happens when two people work closely together happened: we fell in love,” says Hans Henrik.

The couple moved in together and got married – both at City Hall and in the Russian Orthodox Church, of which Irina is a member. They had two boys before moving to Denmark in 1999, where both were hired at the then Institute of Business and Technology in Herning, which merged with AU in 2006. And here twenty years later, they’re still working side by side.

But Hans Henrik, what do you have on your desk – it really doesn’t look like much of anything at all?

“That’s because it’s all in there on my real desk,” he says, and nods in the direction of the five colleagues’ shared meeting room, which is separated from the open office by a glass wall. A meeting room which Hans Henrik has annexed and filled with five test set-ups. 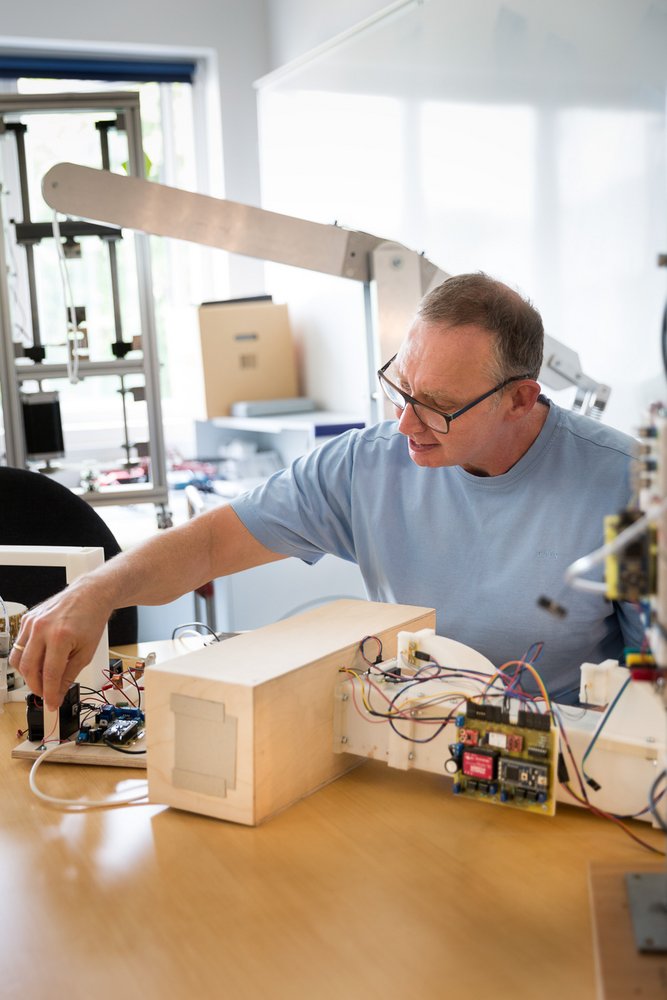 “The first set up is an experiment I’m working on with Peter Lindgren, a professor of business development and technology. We want to see if we can make a monitor that measures the internal climate of the classrooms and makes sure that the students are comfortable when they’re at lectures.” 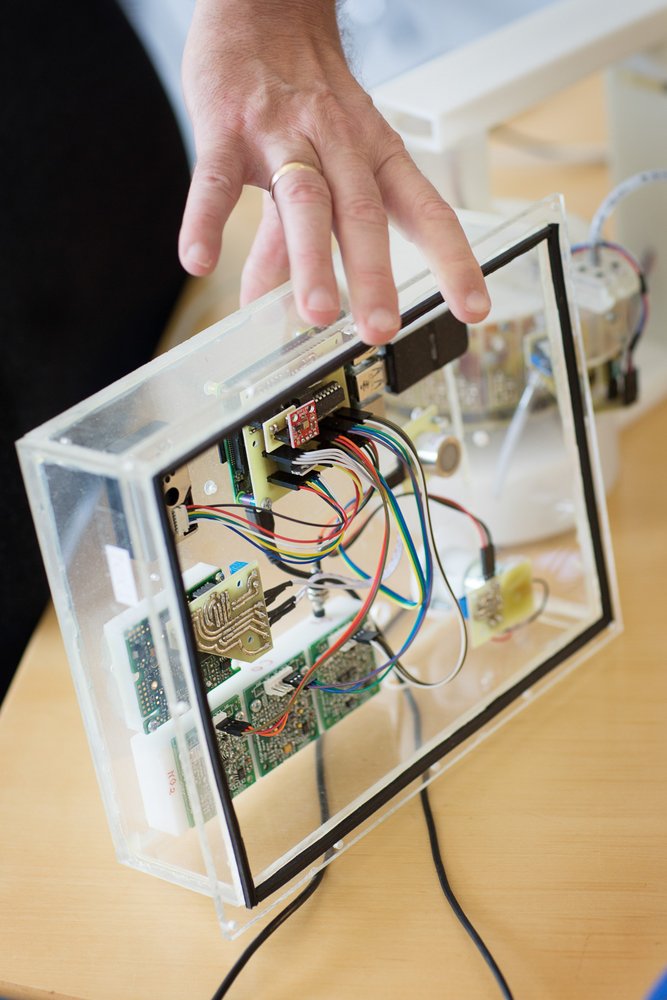 “We’re measuring six different gasses, and you can see online what the climate is like in the classroom, and either interrupt the class or open the windows if any of the levels get too high. We’ve been able to compare the classrooms here in Herning with classrooms in Japan. While we were at 800 ppm (‘parts per million’, a measurement of the concentration of a substance in a specific volume of air, ed.) here in Herning, the Japanese were at 3,000-4,000 ppm. The maximum contaminant level is 1200 ppm,” explains Hans Henrik.

He moves quickly on to an infrared spectrometer.

“The spectrometer is used to illuminate a liquid, for example blood, and that lets you measure the amount of sugar in blood, for example. We hope to develop an online blood analysis test so that you can check how high someone’s blood glucose is simply by illuminating their finger. This would mean that diabetes patients could have a sensor that would tell them when their blood glucose levels are rising so they can take their insulin in time. That would be an important nut to crack, and there are millions of others who are trying to,” he smiles over his strong glasses. 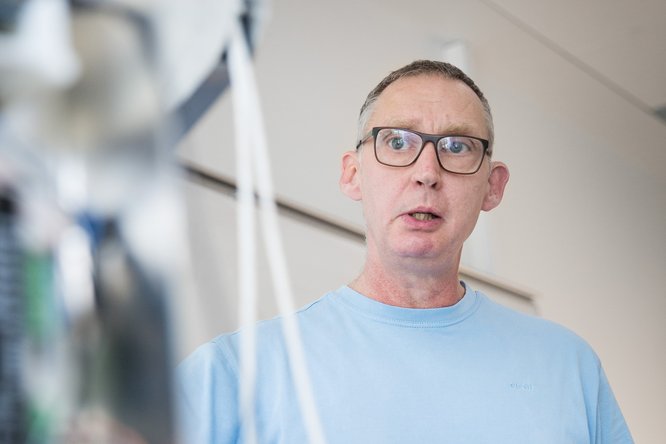 A third experiment is about storing electricity in batteries. A fourth, about designing a mobile hydraulic lift for use in eldercare. And the fifth is about automating assembly lines.

Are these projects purely con amore, or do you use them in your teaching?

Hans Henrik gets involved in the projects himself to makes sure that they’re academically relevant for the students. And some of them do lead to a publication where he’s concerned. But most of all, he does it because he can’t not do it.

“Hans Henrik has so many ideas, he’s really an entrepreneur. But he’s not the best finisher.”

So Irina’s often the one who gathers up the loose ends and ties them up.

“It’s a little like back when I helped him get settled in Russia. I’m still helping him.”