Show me your office – Tobias Wang

A scientist taped to a steel shelf, a corduroy shirt draped over a chair and a Madonna in muted colours with a crude wooden spike sticking out of her chest where baby Jesus is supposed to be attached. Professor Tobias Wang looks for him in a woven basket on the table, but in vain. Our saviour has gone missing. Which doesn’t appear to weigh on the professor’s mind.

Welcome to the office of a scientist who’s such a dyed-in-the-wool atheist that he went to the Cirkuskroen pub instead of church when his wife insisted on having both their daughters baptised.

In fact, he’d already gone to the pub when the vicar came to talk to the parents before the christening.

“As my wife tells it, the vicar looked around our sitting room and asked why we had so much religious art, as things stood (with the absent father, ed.)”.

“But you can certainly be interested in religious art without being religious, and I’m anything but religious. But I’m nuts about Catholic church art in particular.” 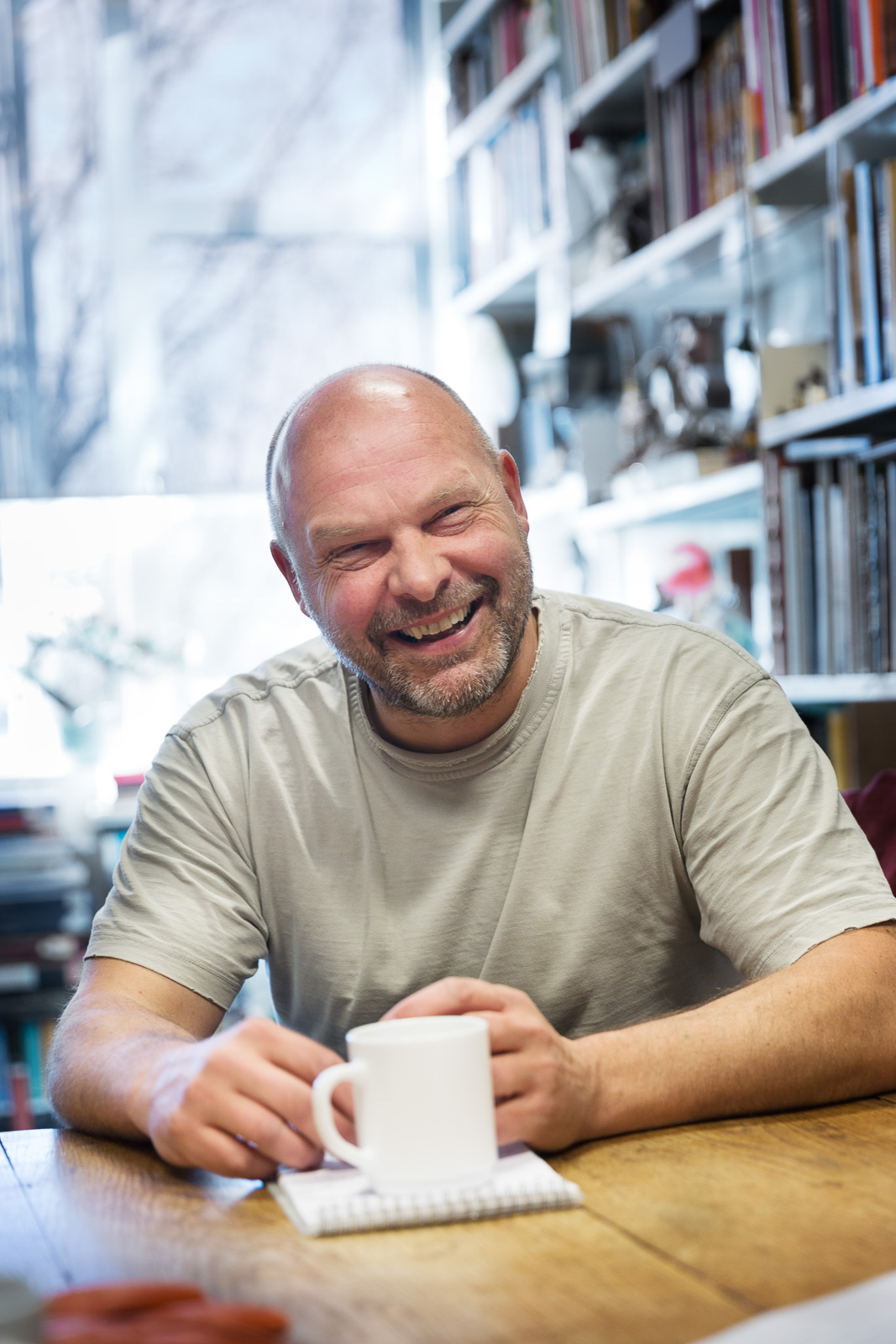 His office reflects this: there’s an oil painting of the Virgin Mary over his desk. Bought on a trip to Guatemala. While a Madonna on a table was purchased in a village in Vietnam. And in fact there’s church art brought back from travels all over the world scattered all over the office. 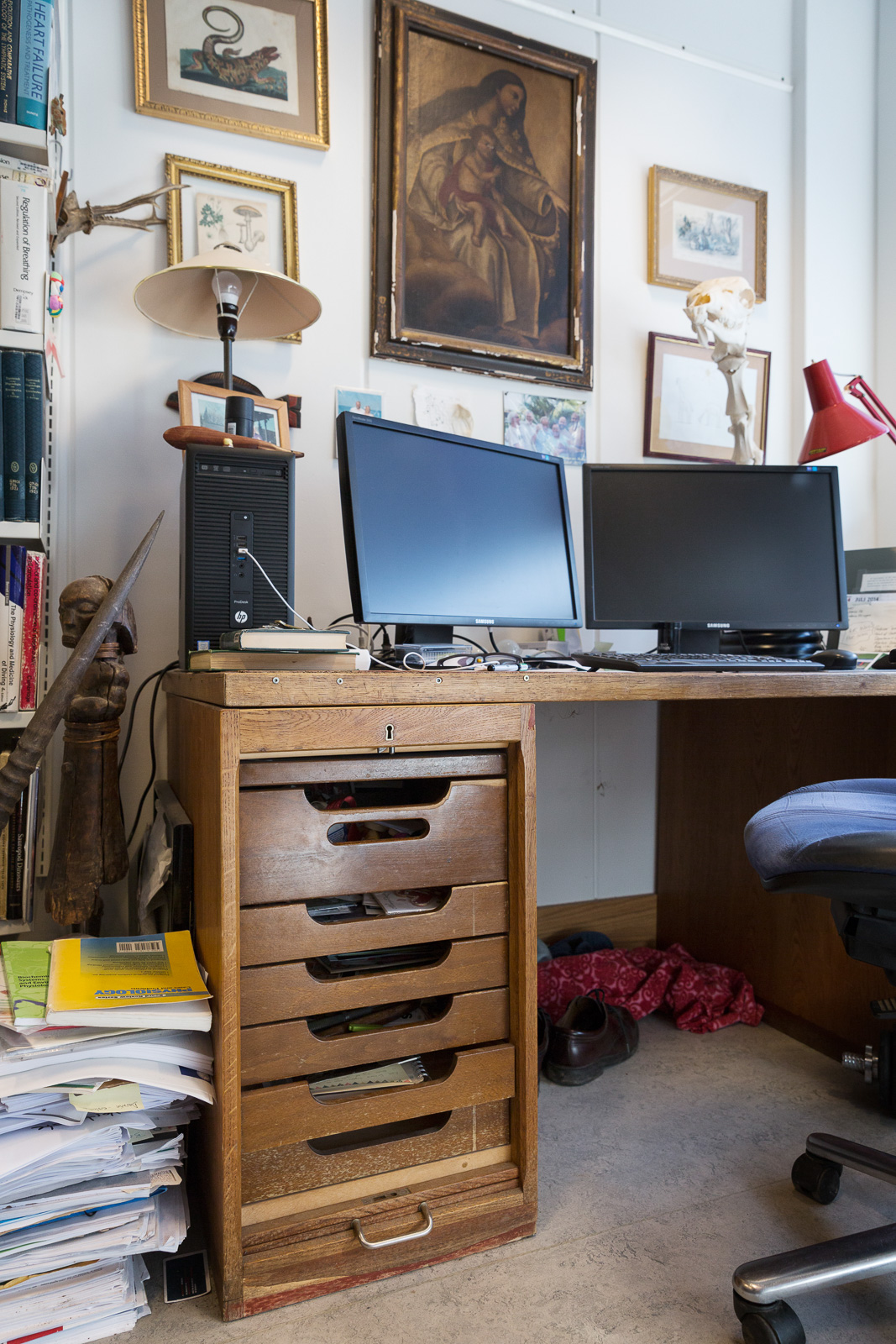 Wang inherited his desk from his paternal grandfather who was a GP in Horsens. And the table graced by the Madonna was his mother’s.

“She bought it way back then for her first paycheck.”

What do you have on your desk right now?

“A biography of the renal physiologist Homer Smith. He’s worked on the kidneys of air-breathing fishes, and is something of a hero.” 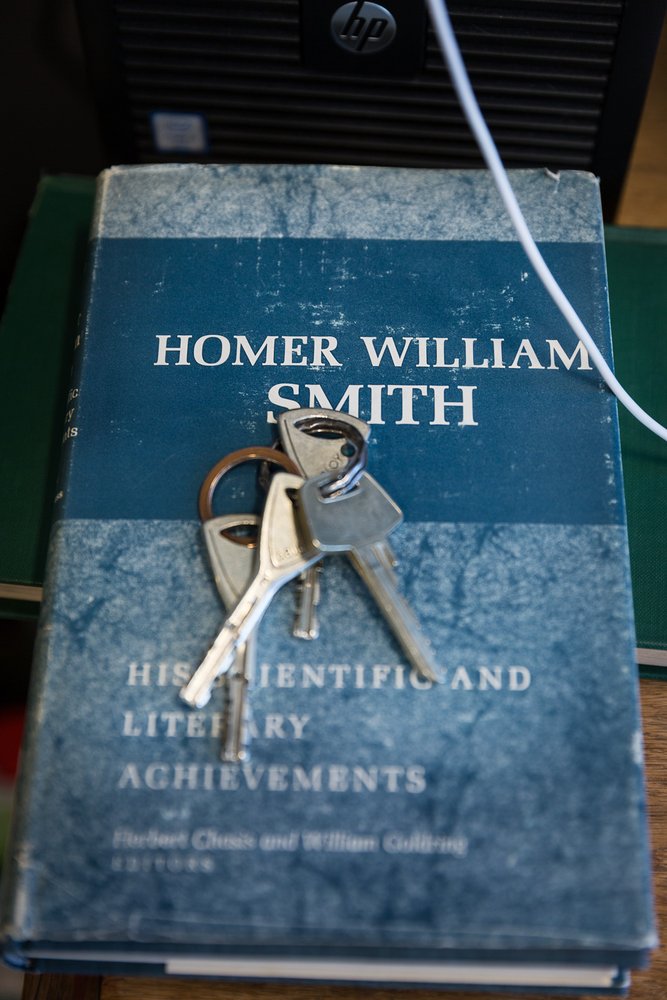 “And there’s a stack of notices about doctor’s appointments, because my youngest daughter has muscular dystrophy. We spend about one day a week at the hospital because of that.” 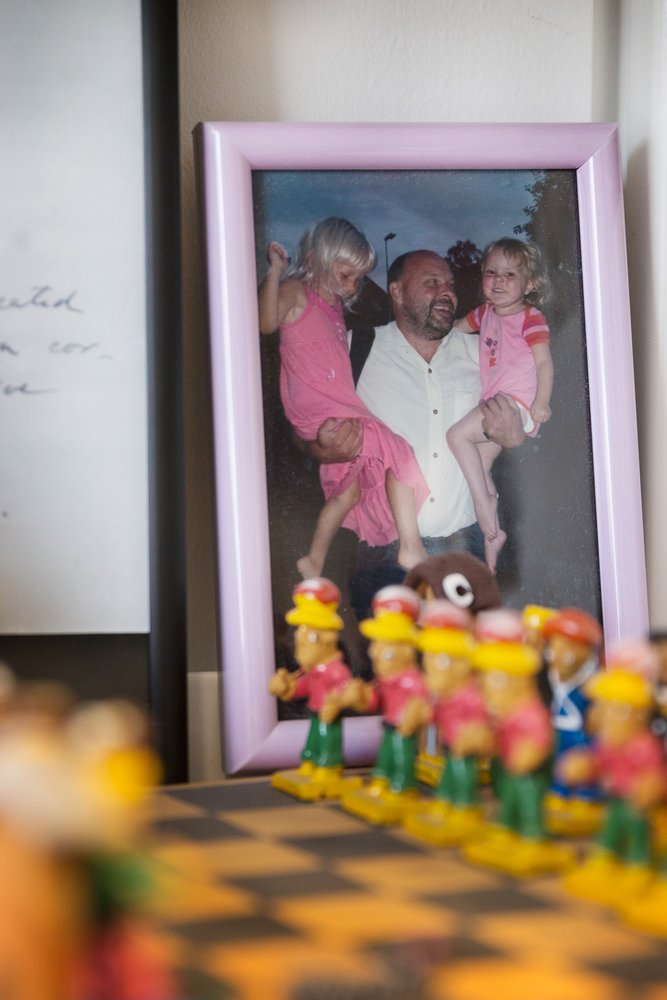 What got you into zoophysiology – are you one of those boys who started collecting animals as soon as you could walk?

“Yes, I’ve always been really interested in animals, and even though I grew up in a boring suburban neighbourhood in Hasle, I managed to find animals I took home with me. My mother wasn’t exactly impressed by my interest.” 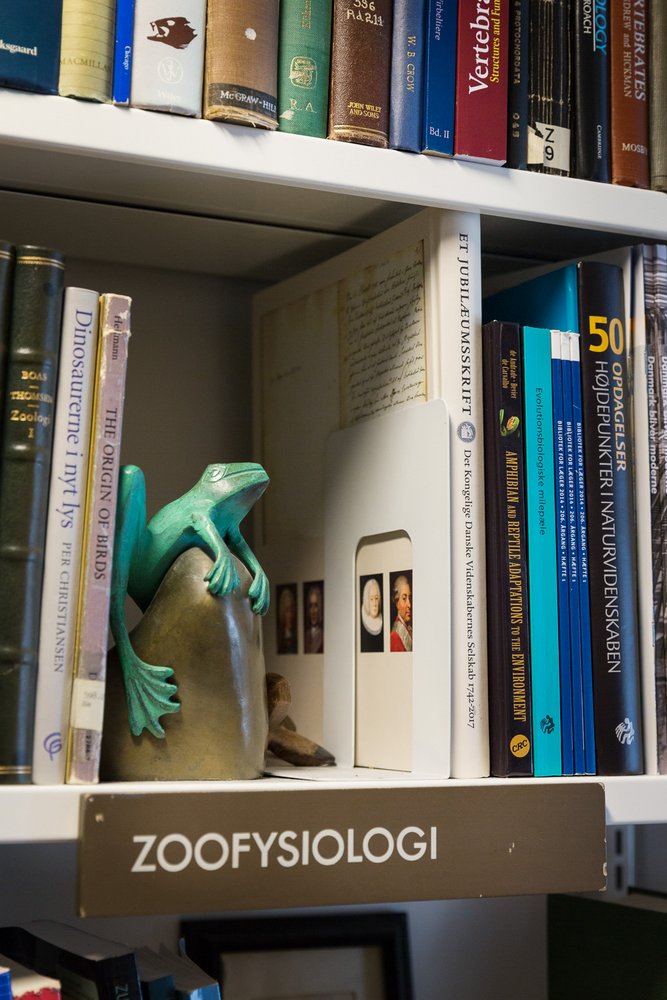 And it didn’t exactly help matters when Wang, at this point a teenager, came home with a live fox in tow one day.

“I had an afterschool job at a pet shop where they didn’t pay me wages, but paid me in animals instead. The fox was one of those animals, and my plan was to raise it to be my dog.”

To make a long story short, the plan was not a success – the fox was banished after two days.

What items in your office say most about you as a scientist?

“That would have to be the hearts. My best studies are of the reptilian heart. How it works and how it’s regulated.” 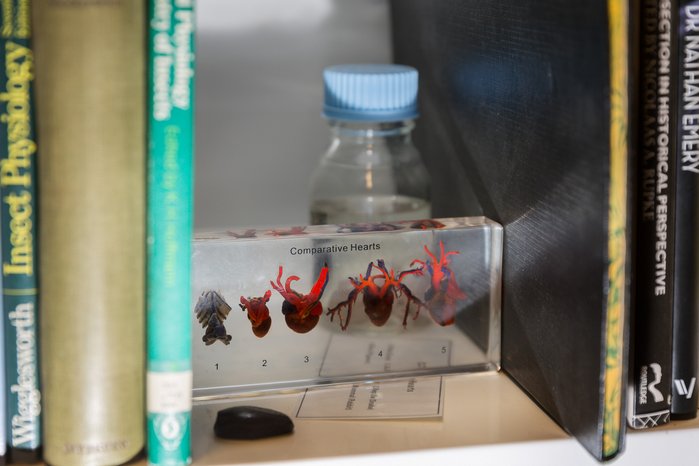 Wang is referring to his work on how the circulation of the blood has developed through evolution: by investigating the hearts of reptiles, he hopes to contribute to new breakthroughs in clinical research and treatment. 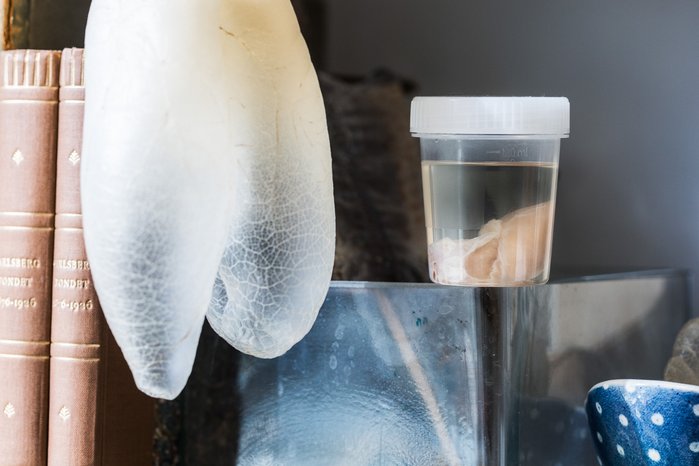 At the same time, comparisons of different groups of reptiles may contribute to groundbreaking research on how the human body reacts to different diseases. For example, how is it possible for certain reptiles to survive without oxygen for months, while humans die after just minutes? How can other animals stand to dry out completely for years and still survive? 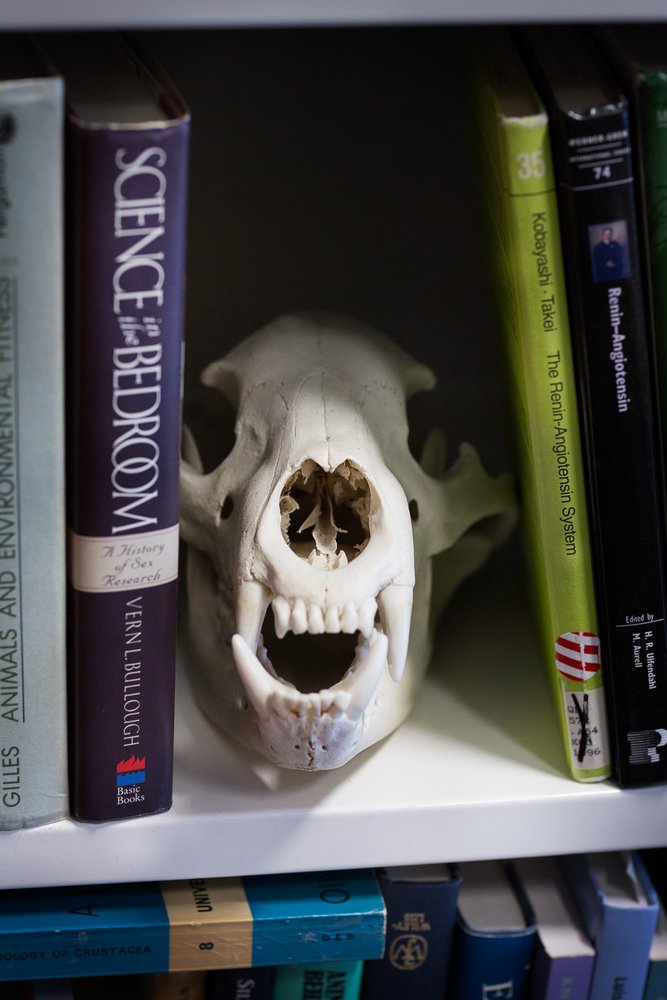 The answers to these questions may help us understand the extraordinary adaptability of some animals, which may provide the foundation for the development of new therapies to benefit humans. 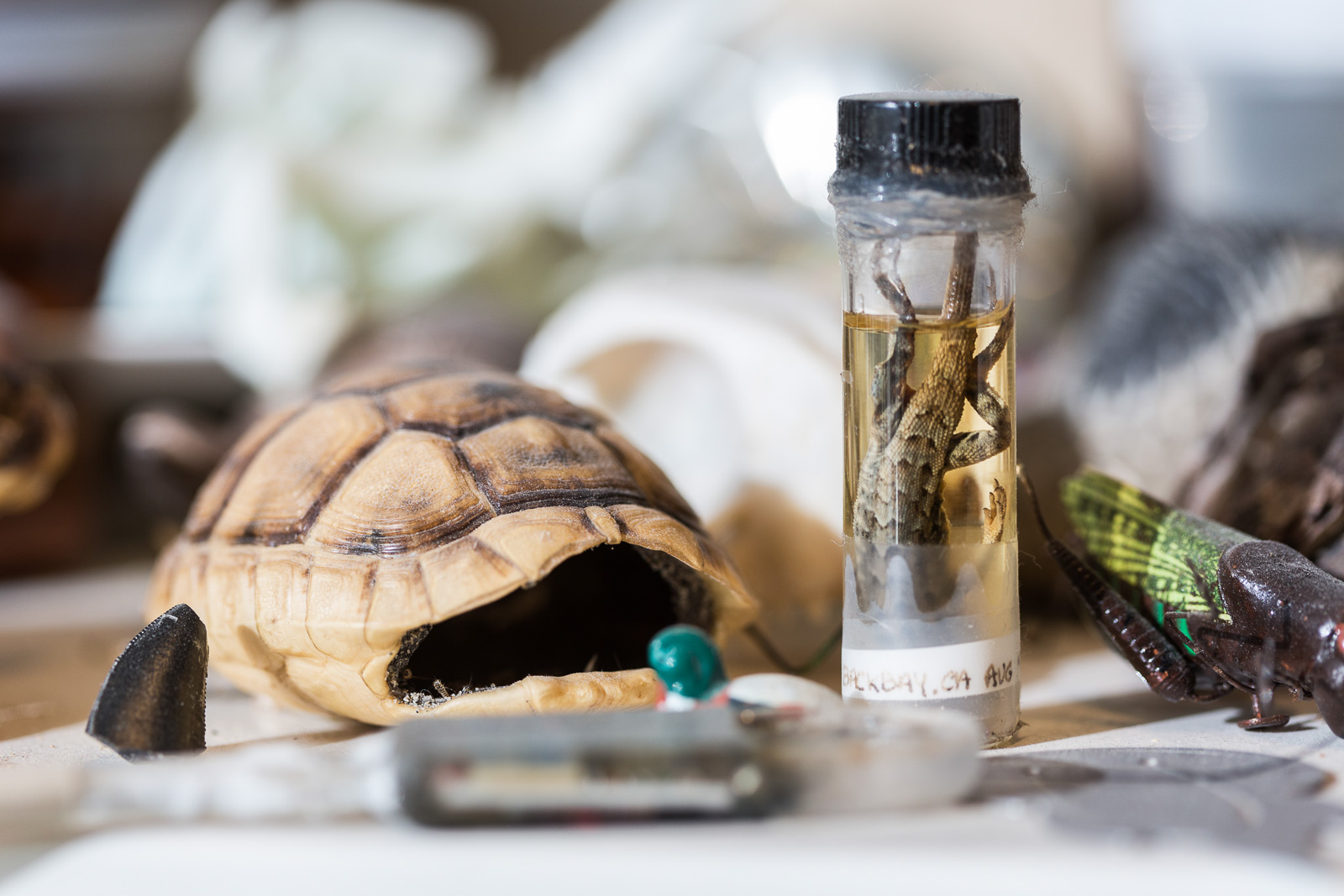 For example, what enables bears to snore through hibernation for several months without having to worry about waking up with brittle bones and weak muscles – or for that matter not waking up at all because of a blood clot? People who are forced to be physically inactive for much shorter periods of time have a high risk of developing all of these ailments. 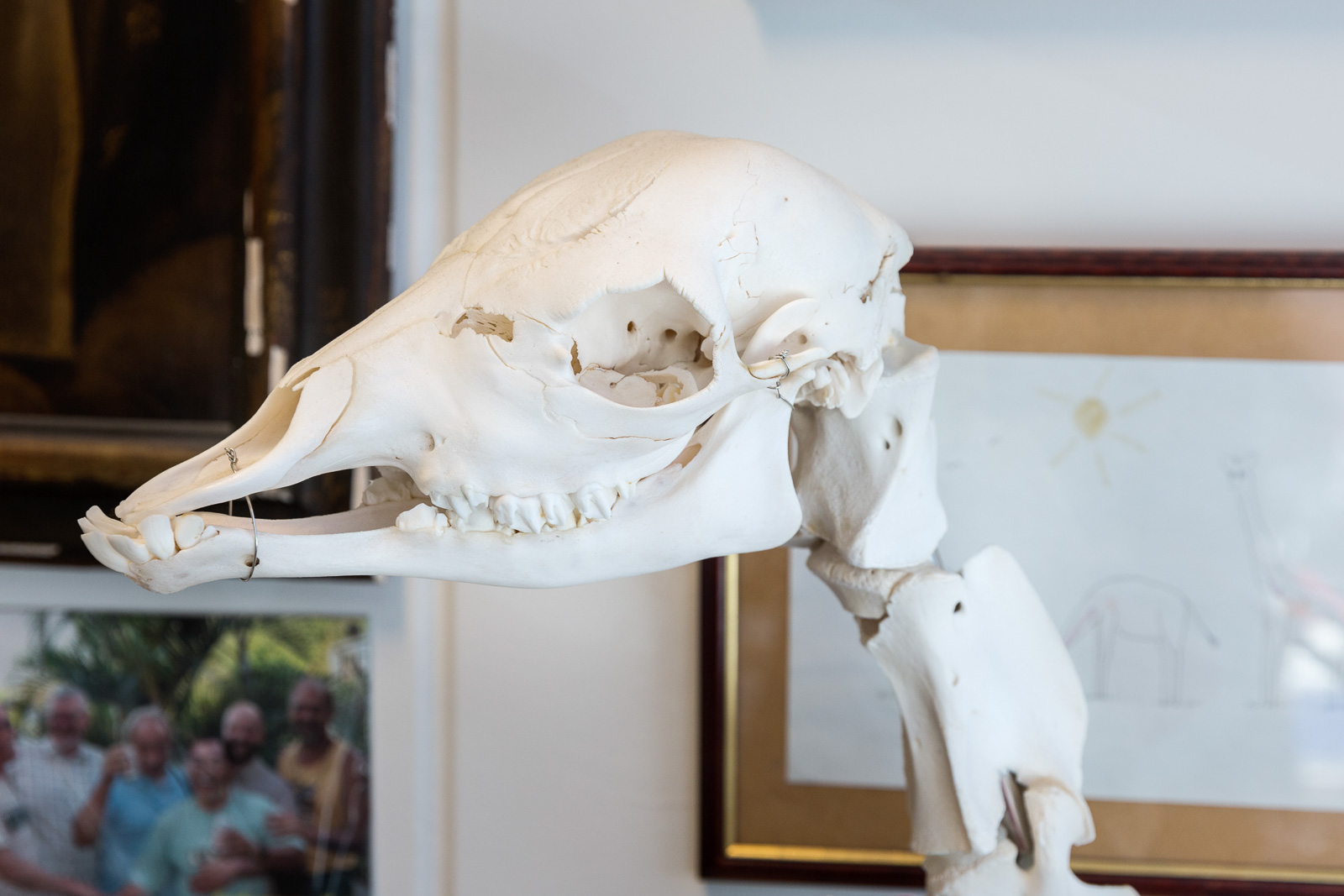 And his hope of contributing to this kind of new knowledge is what drives Wang, whose research takes place at the intersection of biology and medicine.

“Another thing that drives me is that very special moment when you understand a really complicated interrelationship for the first time. It’s magical.” 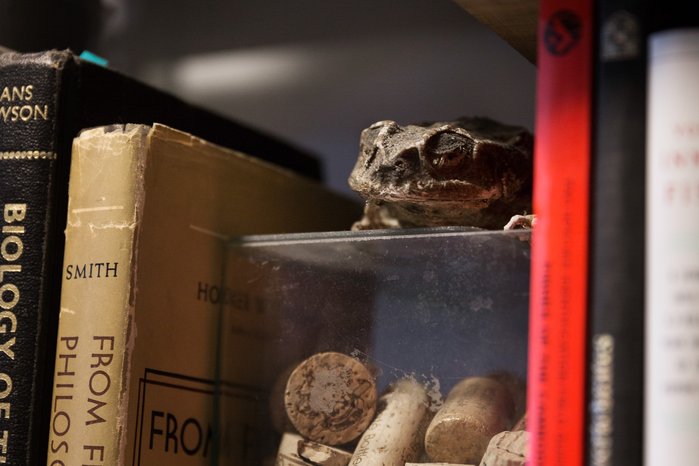 The best time of the day for Wang is the early morning, when he can work undisturbed. In the company of the dead (and extremely desiccated) toad which is sleeping the eternal sleep on top of a stack of champagne corks. What better final resting place? 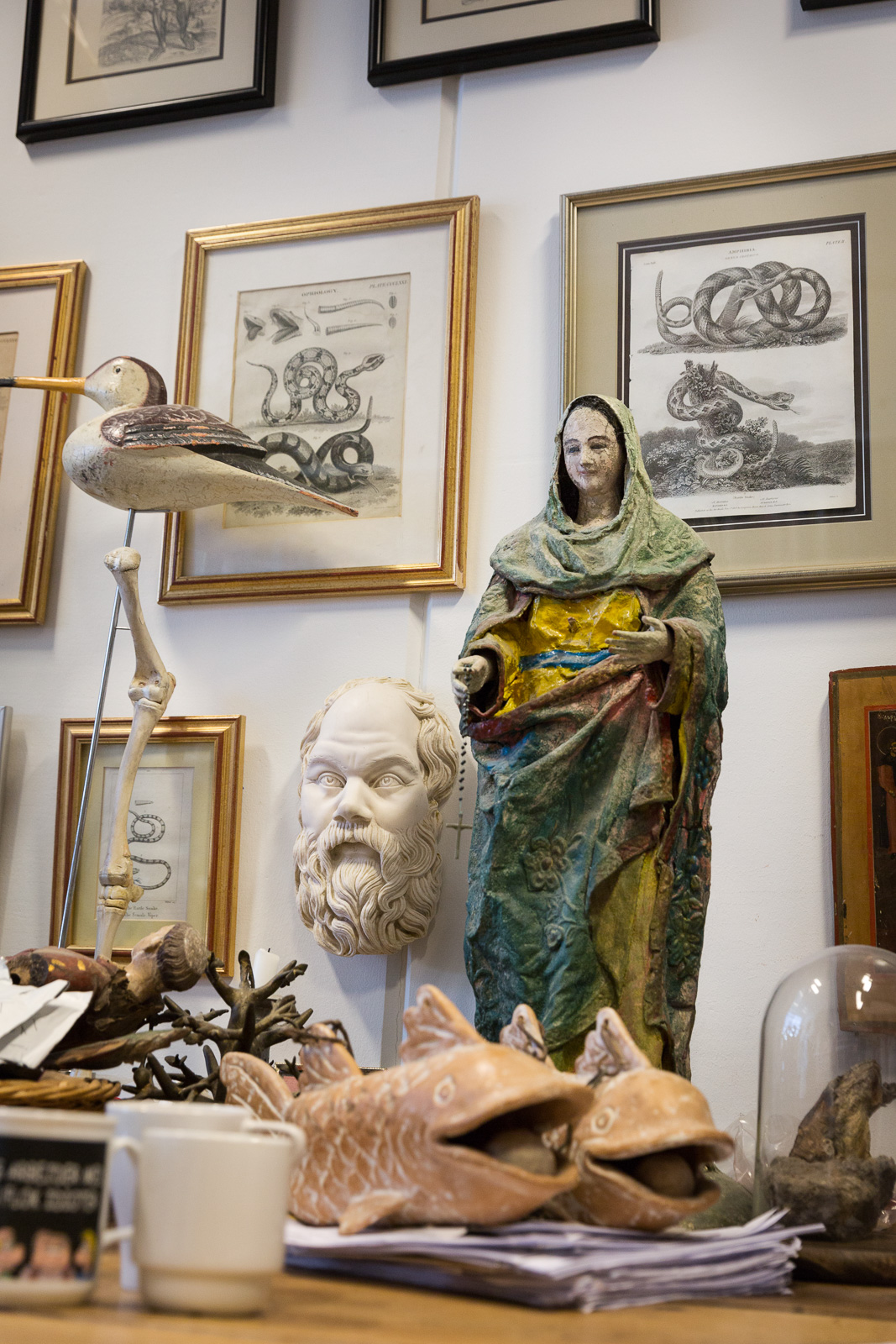 What items in your office say most about you as a person?

Wang looks around his office. Gesticulates rather helplessly and turns around to face the shelf and its many objects. 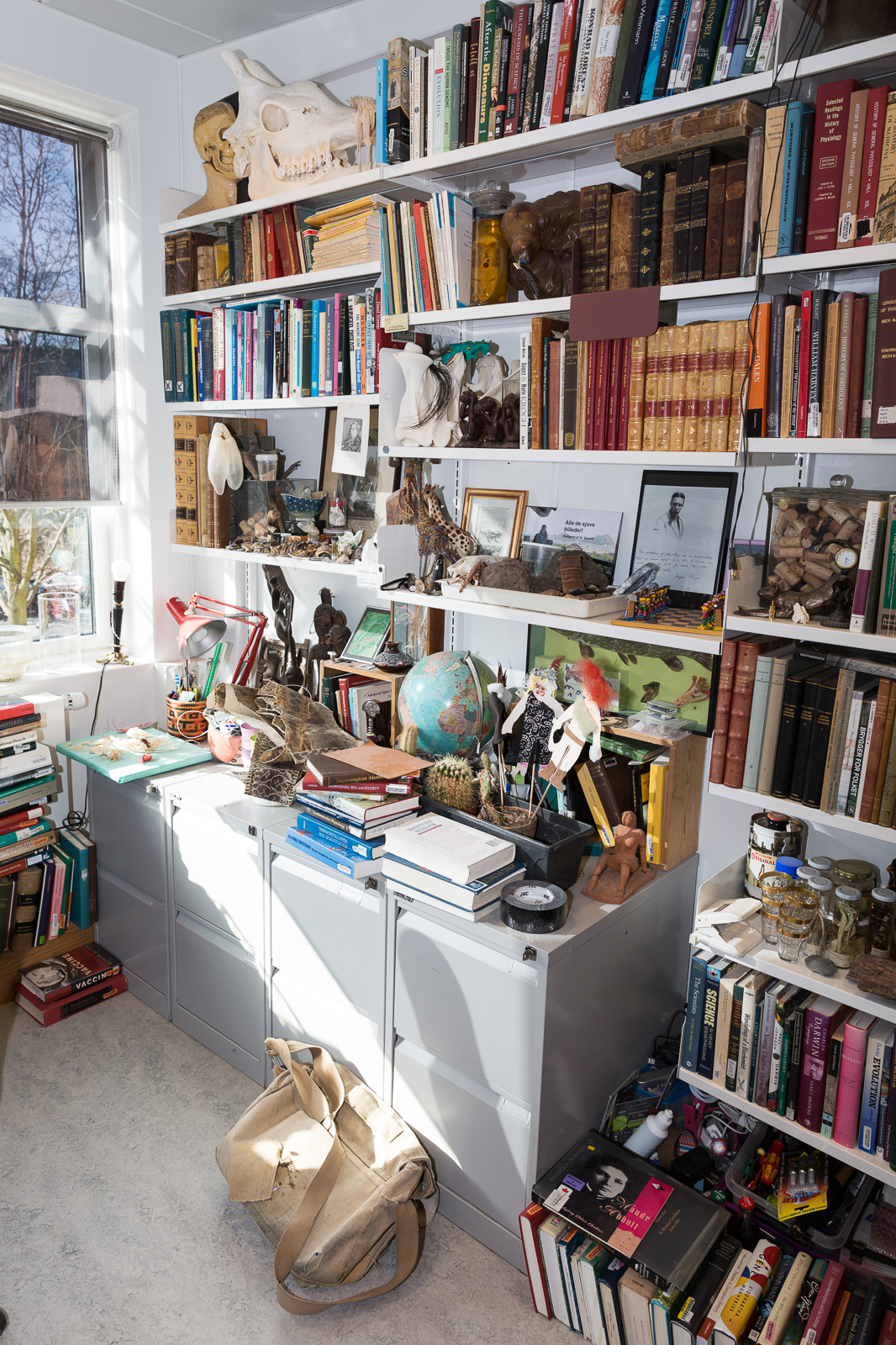 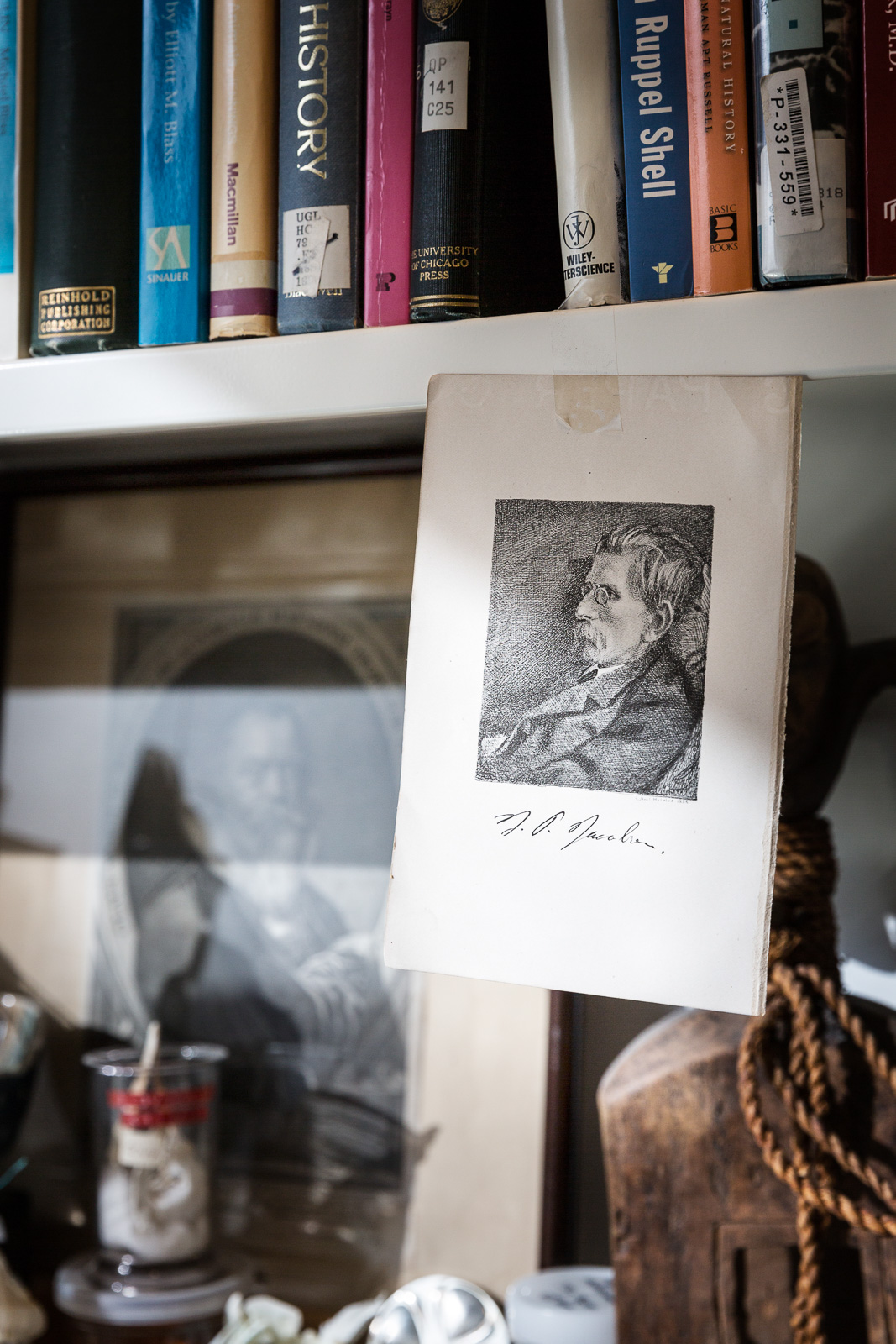 But after all, it’s the totality of this ragbag cabinet of wonders that says most about Tobias Wang. 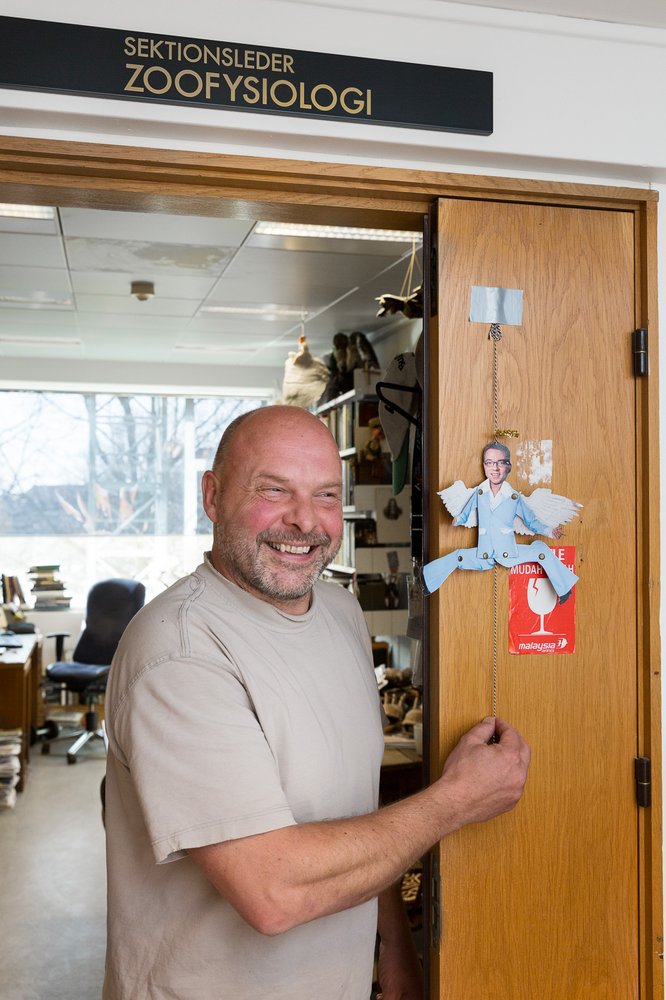