Helle Colding Seiersen checked her phone in the middle of the night for updates on the progress of the OK18 collective agreement negotiations. As joint union representative for AU employees organised under the HK (National Union of Commercial and Clerical Employees) collective agreement, she spends many of her waking hours on that dramatic process. She is similarly involved in local pay negotiations. While at the same time continuing to do her job as international coordinator.

There’s a huge OK18 badge on the bike parked outside International Centre. And on Helle Colding Seiersen’s office door, there’s a red poster that reads ‘Members get full pay during the labour dispute’. On her desk lies Søren Viemose’s book on constructive negotiation in the workplace.

Seiersen is more than usually preoccupied with negotiation at the moment: both the negotiations taking place in the conciliation board, and the local pay negotiations she is involved in as joint union representative for the approximately 700 HK employees at AU. And there are quite a few:

“I negotiate on behalf of about 70 members.” 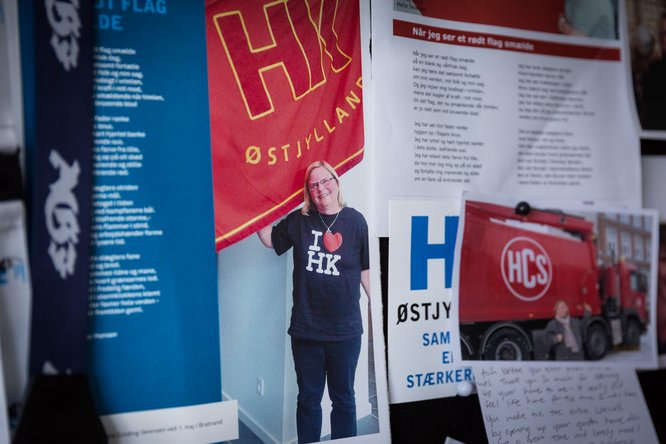 “I look at whether they meet the basic requirements, whether they’ve attached the right language documentation, a copy of their passport and so on. And if everything’s as it should be, I send the applications onward in the system to the international coordinators for the individual subjects. I’m also responsible for the residence and work permits of all exchange students, and I’m responsible for contact to the Danish Immigration Service. I’m also responsible for Erasmus Mundus students on the journalism programme and all of the free movers, the exchange students who pay for their education at AU.” 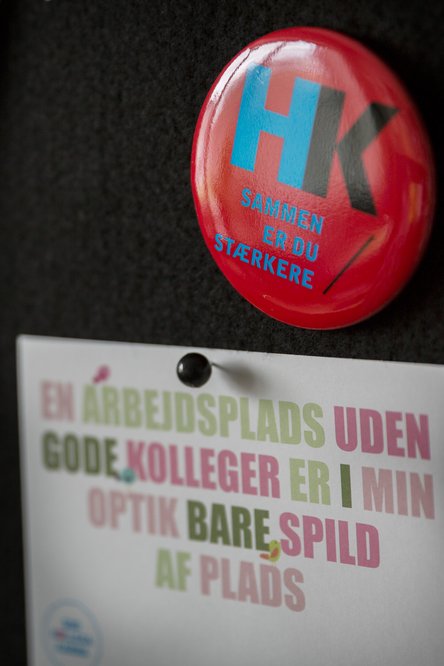 Seiersen’s workload has been reduced to allow her to spend half of her working hours on her joint union rep responsibilities.

“But the union rep work is what’s filling most of my time at the moment, I have to admit.”

Since the strike and lockout notices were announced, she has received piles of emails and phone calls from worried co-workers.

Do you think the labour dispute will happen?

“Yes, I think so. I don’t think things are looking promising at the moment. The first thing I do in the morning is check how the negotiations are going. And sometimes I also check in the middle of the night. Normally I sleep well, but at the moment I’m having trouble sleeping because of the labour dispute.” 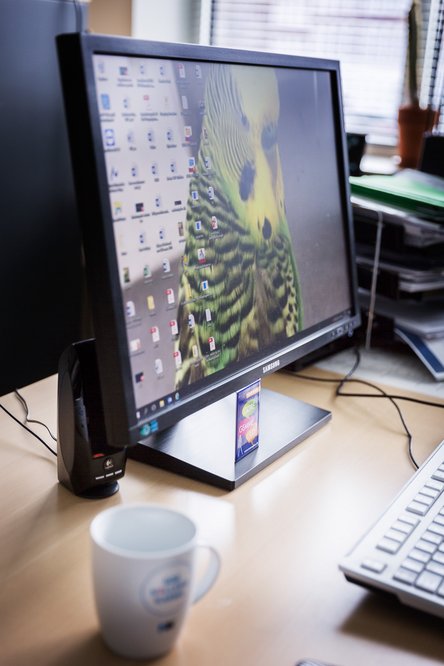 “Weeding beds is pure therapy for me – I can just let my thoughts wander. I don’t know what I’d do without my allotment garden during this time.”

“Grethe’s husband Hans died, and she got lonely, so now she lives with Bjarne and me.”

And the two budgies are already behaving like an old married couple: in any case, he often shouts ‘Shut up, Grethe!’ at his new spouse.

“I have a lot of ‘good co-worker karma’ stuff (HK campaign to promote good relationships among co-workers, ed.). Demonstrating good co-worker karma to my co-workers really means a lot to me. Like being attentive and asking if I have the sense there might be something we need to talk about. Sometimes it can be easier not to, because it takes time and can mean that you have to change your plan for the day. But you have to make it a priority.”

Seiersen also values the support she gets from her co-workers. For example, she was surprised when a couple of her co-workers took the time to participate in the HK morning demonstration on Ringgaden to show their support for her union rep work.

“It’s vital in terms of getting extra energy, positivity and happiness.” 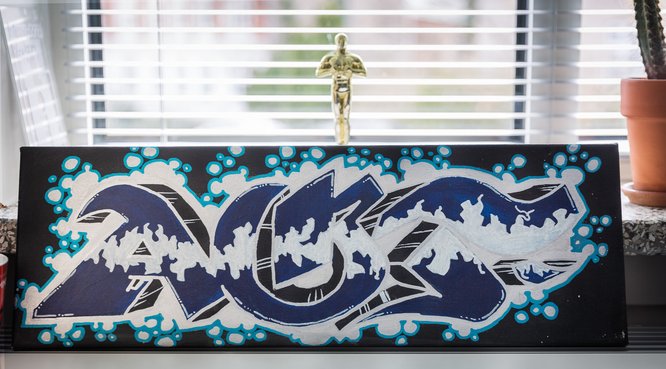 Seiersen looks around her office. Behind her, there’s a notice board with programmes from May Day meetings, a pair of suspenders with the logo of the local football team AGF, a Bjarne Riis collage, a Steelers hat (NFL team, ed.) and photos of her son.

“I think a lot of people would be able to guess that this was my office when they see the AGF suspenders, the Steelers hat and all that HK stuff. I have a lot of varied interests, as you can see on my notice board. And I’m also very, very patient and forbearing.”

And if there’s anyone who raises an eyebrow at that description of the fiery union stalwart, she counters:

“As my many years of devotion to AGF (a team that often loses, ed.) testifies.”

And she does have a point: the last time the city’s team won the Danish championship was in 1986 – the year Seiersen moved to Aarhus from Funen and dropped OB (Odense’s football team, ed.) for AGF.

What about the May Day programmes – do you have those so that you can practice The Internationale to get ready for 1 May this year? 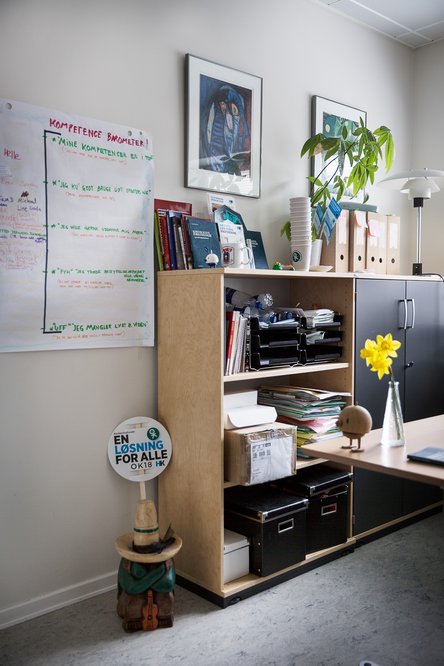 Seiersen’s sleeping Mexican was given to her by Kristian Thorn, director of the administrative division AU Student Administration and Services, who brought it back from a trip to Mexico.

“Yes, well, he didn’t bring it back for me. But it wasn’t to his family’s taste, and so I said that I’d like to have it. And so I got it. And I’m so fond of it. It reminds me of my job working for ActionAidDenmark, when I was in Mexico. I taught democracy and freedom of expression to different youth organisations. There was a Mexican man who would sit and sleep in exactly the same way right across from the school.”

And she does seem to have a bit of a thing for Mexican men. In any case, this charming fellow adorns her windowsill. 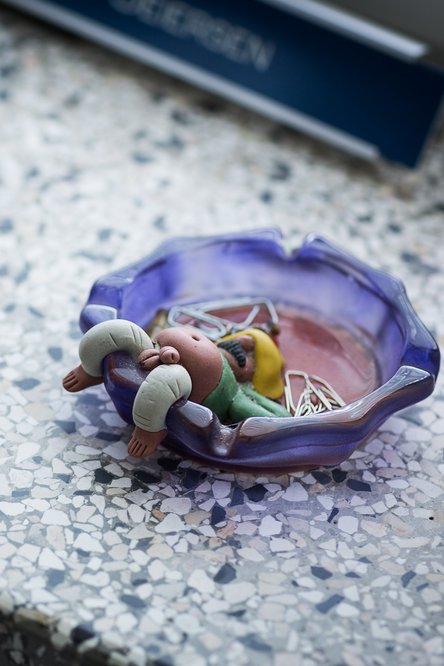 “It was given to me by a student worker who brought it back from Mexico for me. It was on my desk for a long time, but we had a Turkish cleaner who refused to clean my office as long as it stood there.”

“I’m going to process applications from exchange students. That’s what I’ll be doing the rest of the day. That is, if I’m not called to Copenhagen for a briefing in the union steering committee, either because there’s a settlement or because the negotiations break down.” 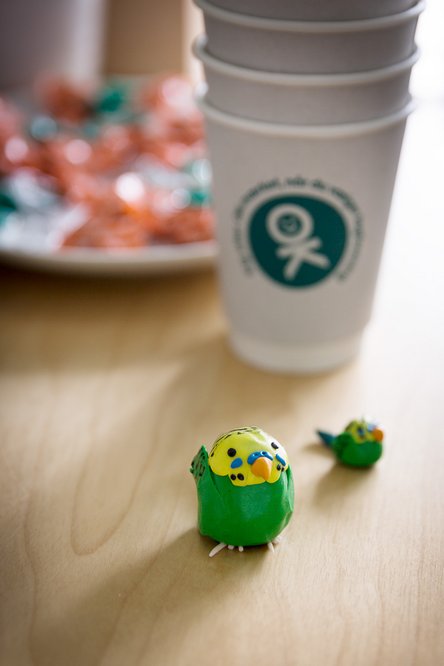