Show me your office – Peter Sunde

Peter and the Wolf is a hot topic in the Danish media right now. The wolf, because wolves have returned to the Danish countryside. Peter Sunde, senior scientist at the Department of Bioscience in Rønde, because he’s keeping track of them. Sunde is the co-author of a report on the first Danish wolf pack seen in Denmark since the last wolf was shot in 1813. But this is mostly about Peter and his office at Kalø Hovedgård outside Rønde.

Cosy. And yet oddly spartan. There are several photos on the walls, cartoons are stuck up here and there. Hiking boots and roller skis are dumped on the floor, and there’s a worn green parka on top of a filing cabinet. There’s a human skull on a big bookcase, grinning just as vacantly as any other skull, next to a small plastic wolf. And there’s more in the same vein. 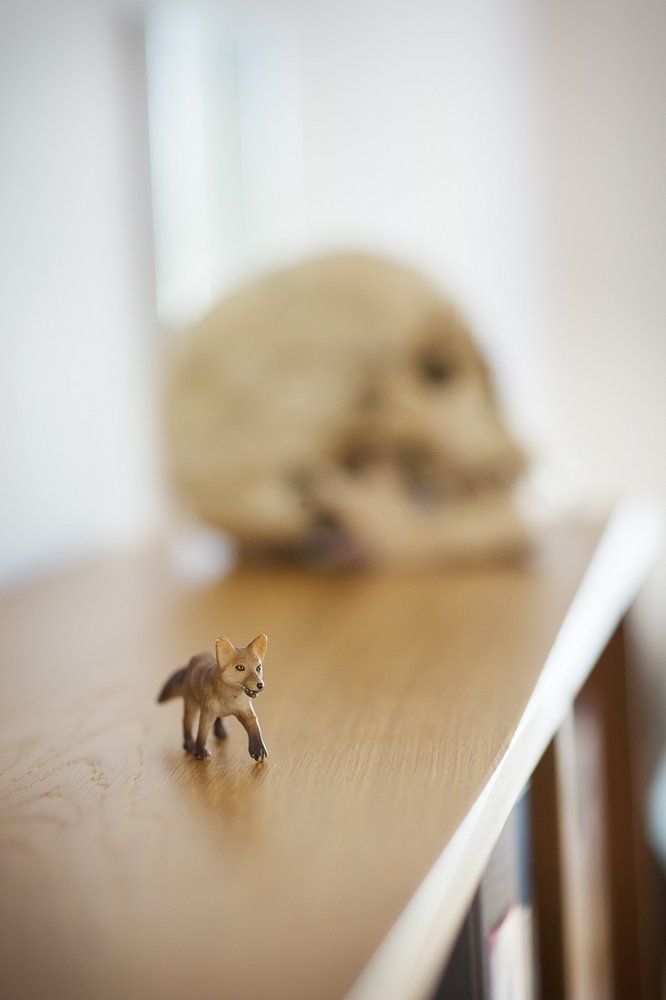 ‘One of my former Master’s thesis students,’ Sunde usually replies when asked about the skull on the bookcase. The true story is that his parents bought it for him when he was a 12-years old and an avid skull collector. In more recent times it’s been a hit at various pirate-themed birthdays in the Sunde family. But at one point, Sunde realised that a human skull probably wasn’t the most appropriate decorative object to keep in his living room: one dark and stormy night, a neighbour came over to close a garden gate the family had forgotten about before they went on holiday. The first object the beam of his flashlight fell on was the skull in the empty fireplace in the living room, illuminating it with an eerie glow.

While we speak together, Sunde sprawls in an upholstered armchair that also looks like it has a story. But he doesn’t point to the chair when I ask:

What object in your office says most about you as a person?

He is silent for almost a minute, clearly at a loss for words. Fortunately academic abstraction is always an available strategy. 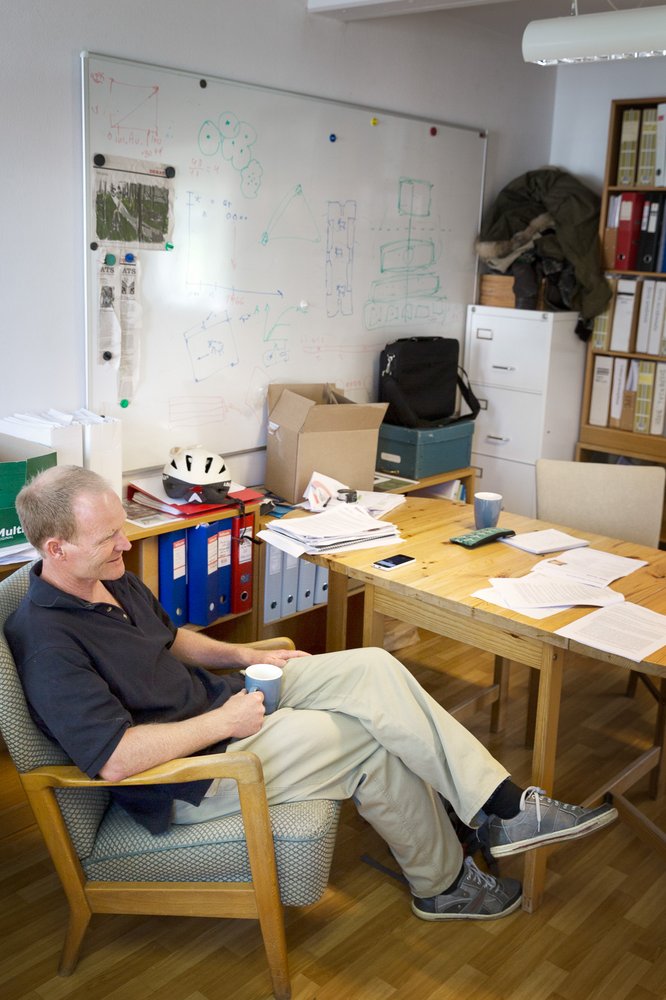 “Well, that assumes that I can be viewed as a person and not as an animal...”

Let’s take up that issue some other time...

After another look around the office, Sunde finally concludes:

“I’m actually pretty boring as a person! So the question is whether I have anything special.” 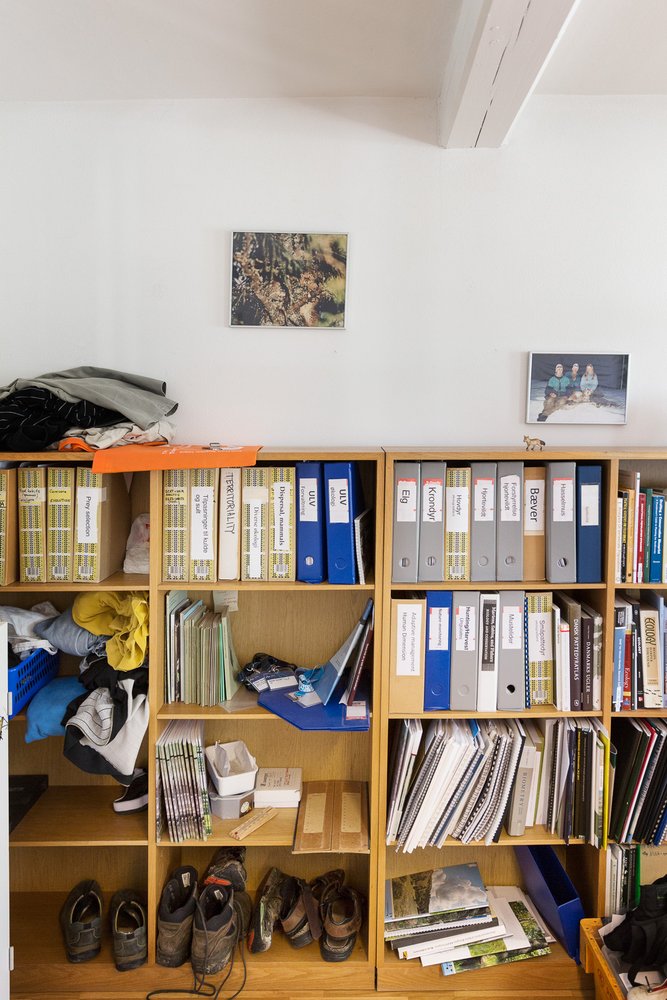 Nonetheless, he gives it one more try, and asks a question himself:

“What was the first thing you noticed?”

The little pink note on your door and the butterflies on your cabinet. 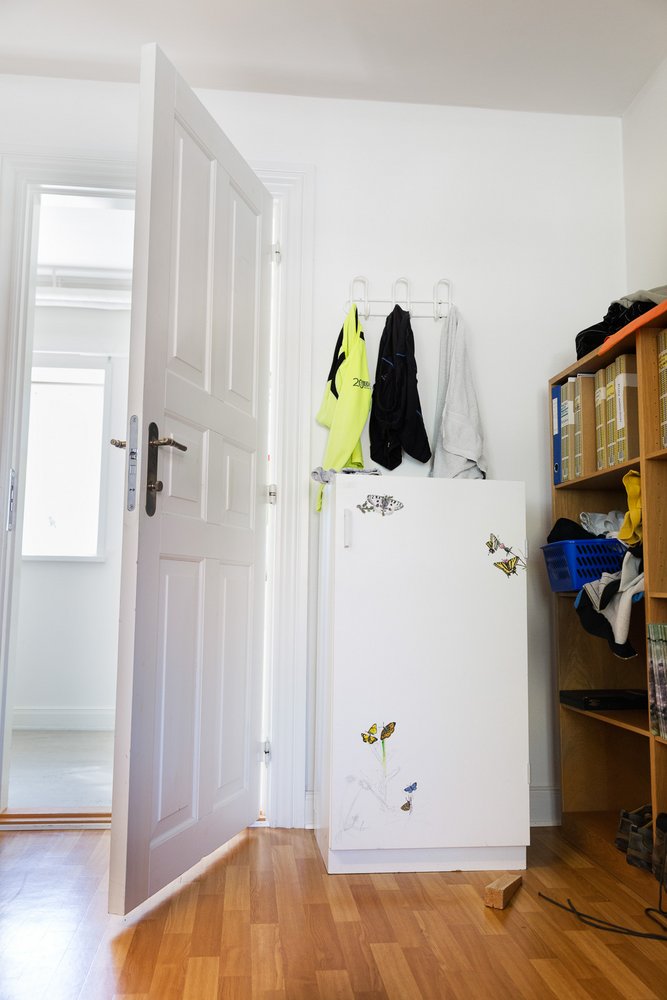 ‘What do you always have in your fridge?’ is a frequent question in lifestyle programmes on TV. Sunde answers: “If I have to name just one thing that passes the banality test, it could be a can of alcohol-free beer. That’s the ultimate reward I think about while I’m roller skiing up the 100 meter slope of Agri Hill in the baking heat, like I did today.” 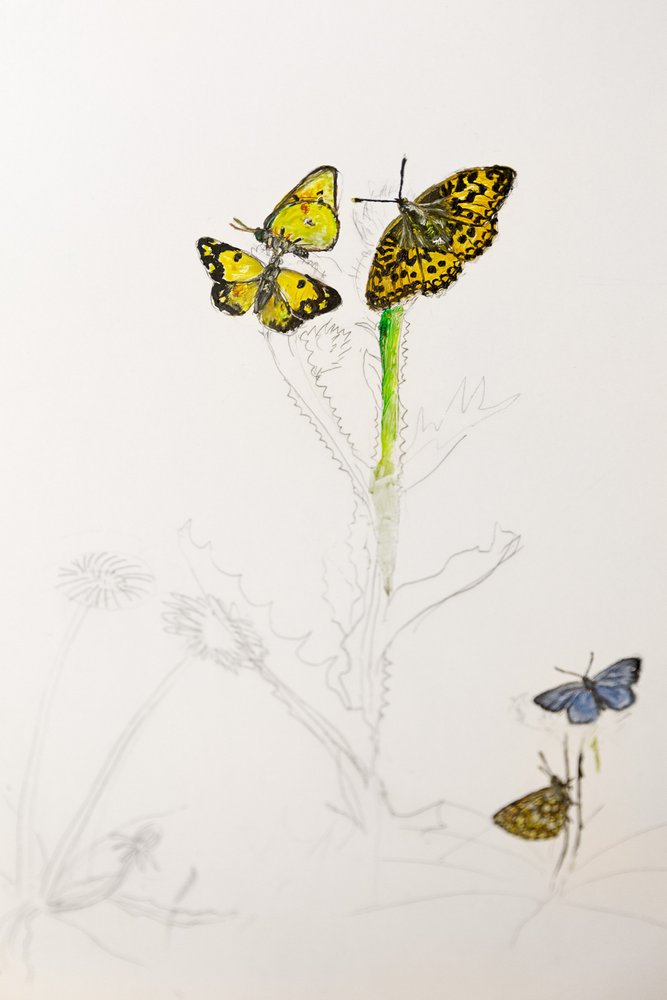 Sunde is quite good at drawing, and he did the lovely illustrations of butterflies which are painted in oils on the front of his butterfly case.

As a rule, young Sunde’s excursions in nature took place in pleasant solitude.

“I had a friend who went with me sometimes. But I often went alone, and I was fine with that. I’d typically walk for a few hours when I needed some peace of mind. I ran my first marathon when I was fifteen, and I guess I achieve the same peace through roller-skiing. I do that pretty much every day, so I suppose the roller skis are the other clue about me.” 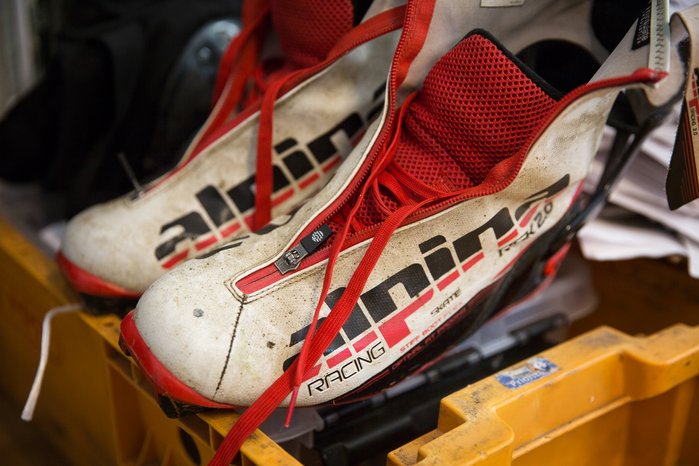 “I live in Agri on Mols, and it’s nine kilometres to work, including a couple of enormous hills. I roller-skiied here this morning and I’m going to roller-ski home. That’s my daily routine, and I want to get outside in nature and exercise every day.”

Sunde used to roller-ski and cross-country ski at an elite level.

“I still have a relatively high level, considering my age.” 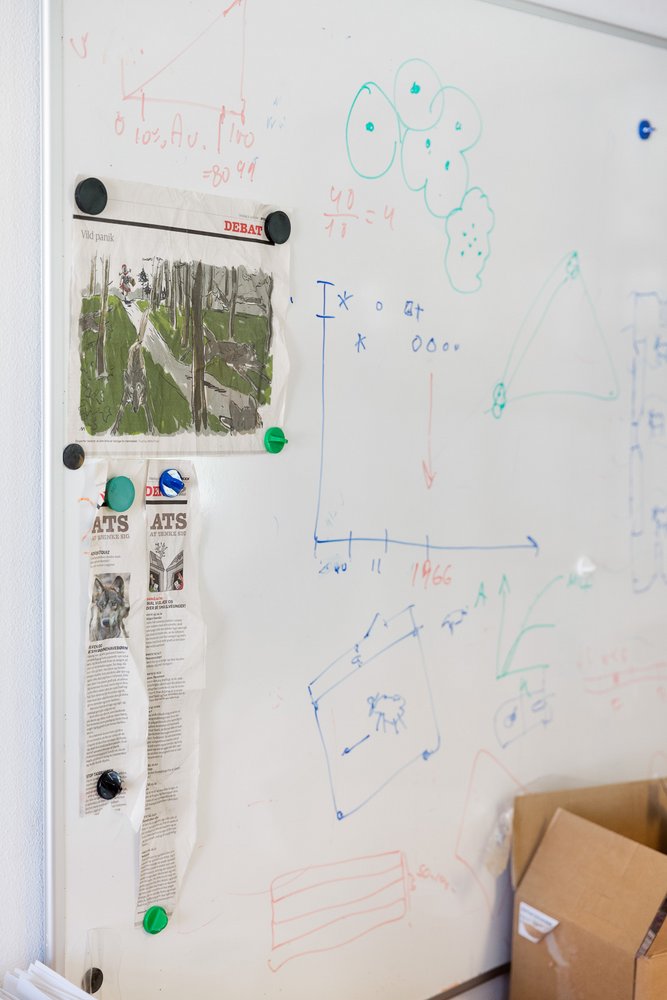 On his whiteboard there’s a satirical cartoon of Little Red Riding Hood wandering down a forest path with a basket under her arm while the wolves flee in all directions. Sunde thinks this is spot on as a comment on the public’s reactions to the wolf’s return to Denmark. The cartoon caption reads: ‘Experts assure us that wolves are not a threat to people.’

In general, Sunde is not a big fan of sedentary computer work. Like many others, he has to force himself to sit down in front of his pc when it’s time to write scientific articles, and even though he sometimes does get into the flow while he’s writing, most of his creative thinking takes place in front of the whiteboard in his office. 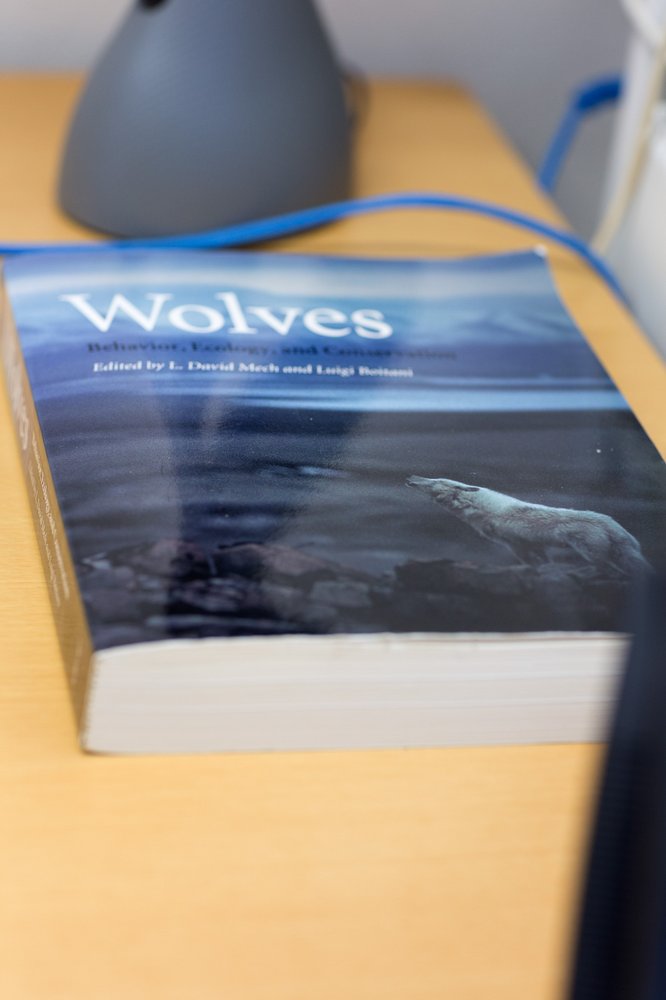 But there’s no way to avoid it completely. The subject everyone’s talking about. Canis lupus.The grey wolf, which has returned to Denmark. And which Sunde is monitoring with intense interest. Sunde has become a ‘wolf scientist’ in part on the background of his many years of work on another large predator, the European lynx. Sunde wrote his thesis on the European lynx in Norway in the 1990s. And he’s since written a number of scientific articles on the subject.

“However, at one point I got utterly fed up with all the discussion about large predators, for example the lynx, that was going on back then as well.”

Are you saying that at that time in Norway there was the same fascination with – and not least fear of – lynxes that we’re currently seeing around wolves in Denmark?

Yes, except for the fact that people weren’t afraid of lynxes in Norway. But there were a lot of the same issues. For example, that large predators actually can cause real problems. When I started working on my thesis on the feeding biology of the lynx, I naively believed that predators belong in the wilderness and only took domestic animals in exceptional cases.But then I found out that their primary food source in these fjord areas were the tame reindeer which belong to the Sami.So things turned out not to be so simple.I’ve carried this experience and insight over into my work on the wolf.Rule number one is not to have any opinions about the wolf yourself and to focus 100 per cent on analysing and assessing the actual situation.Any political opinions I might have about wolves are no more valid than any number of other people’s, and are therefore irrelevant.” 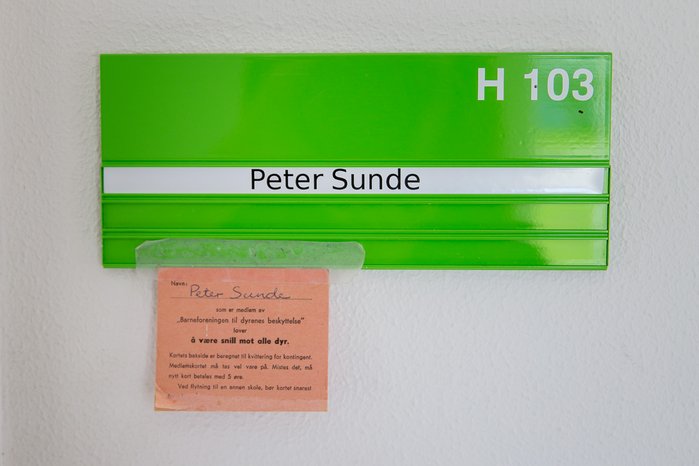 Peter Sunde is a Norwegian citizen. His mother is Danish and his father is Norwegian. He owns a cottage in Jotunheimen a five-hour drive north of Oslo. His father built the cottage, and it was passed on to Sunde. The Sundes normally spend their summer and winter holidays there.